Just as the “We Are Cunard” blog falls to a new writer with Cunard president Peter Shanks, “The Cruise Examiner” column at cybercruises.com is also being entrusted to new hands.
After thanking Mark Tré for his three years of producing this column, we are pleased to announce that Kevin Griffin, managing director of specialist cruise agency The Cruise People Ltd of London has agreed to take over the weekly spot.
Griffin, born in England, emigrated to Canada by sea as a child but has returned to live in the UK three times, the last in 1992 when he established The Cruise People. Kevin, who once worked in the shipping industry, is also a director and past chairman of the Leading Cruise Agents of the UK and a qualified shipbroker. 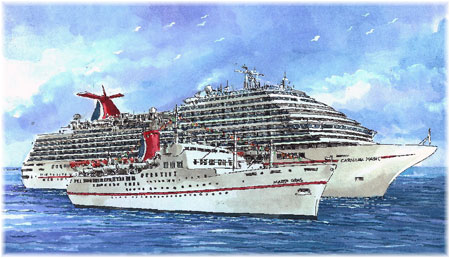 While cruising has been popular since the last half of the 19th century, most people today mark the beginning of modern cruising to some time in the late 1960s or early 1970s, when Transatlantic liners were on their last legs and Norwegian Caribbean Line, Royal Caribbean Cruises and Carnival Cruise Lines were all being formed in Miami. While older names are gone, all three of those firms are still with us.

There is still a lot of longer-term history out there, of course, with big names such as Cunard, P&O, Holland America Line and Costa still with us, but all are now part of Carnival Corp & PLC. There is no question who is the king of the cruise market, of course, especially as the delivery of the 128,251-ton Carnival Magic to Carnival Cruise Line yesterday marked the occasion of the 100th cruise ship to join Carnival’s now ten-brand international fleet. And still on the subject of Carnival Corp, how important Europe is to the whole is indicated by one statistic. While Europe accounted for 33% of Carnival Corp’s capacity in 2009, it contributed fully 49% of the group’s operating income.

Now let’s look at just a few the developments of recent years: