Today sees news of ships of three different sizes, with gross tonnages of four digits, five digits and six digits. Thursday saw the announcement by Viking Cruises of details of its new 47,800-ton 925-passenger upmarket cruise ship Viking Star, which will be offically named in Bergen in May 2015. The new ship will be built by Fincantieri in Italy. The day before, P&O Cruises laid the keel for its new 141,000-ton 3,600-passenger flagship, also being built by Fincantieri. No name has yet been announced yet but she is due to be introduced in March 2015. Meanwhile, in North America, Pearl Seas Cruises, a division of American Cruise Line, finally took delivery of its 4,985-ton 210-berth Pearl Seas, a ship that was actually completed in 2009. The Canadian-built ship is intended to cruise the Great Lakes and East Coast of North America.

Last Thursday, at a gala announcement in Beverly Hills, Viking Cruises announced details of its first ocean-going ship, the Viking Star, which is due to enter service in May 2015. She will be the first of a pair of 925-passenger ocean-going cruise ships for Viking Cruises, the new cruise operation that has sprung from Viking River Cruises.

The line also has options for a further four such ships, all with Fincantieri, which could eventually mean a fleet of six such ships. So together with Azamara Club Cruises, with two ships, and Oceania Cruises, with five, there should eventually be thirteen ships serving this segment of the market, which is above premium but not ultra-luxury.

Interestingly, the new Viking Cruises design is actually a larger version of the original Renaissance “R” ship design, but with significant changes.

Viking Cruises is a line that emphasizes geography, culture, history, good food, comfort and value for the money, while its guests are 55 plus, well educated, affluent, curious and active, as well as interested in history, culture and music. Which seems to be a good match for this corner of the cruising market.

When Viking polled its guests, it found that many thought that (1) ocean ships have become too big, (2) too little time is spent at the destination, (3) they are not as good value as you think when you purchase and (4) the small ships are far too expensive

So the announcement of these new ships can only be good news to those who have grown tired of ships growing bigger and more impersonal as they are built to carry 3,000, 4,000 or even 5,000 passengers, with as many diversions as a state fare to keep them busy.

Some of the features of the new Viking Star include:
– all cabins with a private balcony
– a two-deck high observation lounge at the forward end
– an outdoor pool at the stern as well as a midships pool with Magrodome
– a complete walk-around promenade deck beneath the lifeboats and tenders
– the main dining room will have “the best food”
– it will also have floor-to-ceiling windows that slide open
– the spa has been vanquished from deck 9 on top to deck 1 below.

Moving the spa is particularly important as instead of being located in prime space with forward views on top of the ship it has been located on a lower deck. This freed up the area for a two-deck high observation lounge. Why so many cruise lines chose to locate spas in prime real estate is a mystery but Viking is showing respect to its customers by locating theirs elsewhere, thus giving the views back to its guests. Another area that would have been the card room, Internet centre and a Horizons Lounge has been dedicated instead to suites.

Viking Cruises intends to provide excellent value for the money, with fares starting at $420 per person per day, including airfare, shore excursions in each port, concierge service, WiFi, complimentary wine, beer and soft drinks with lunch and dinner as well as specialty coffees, self-service laundry, free room service and all port taxes and transfers to and from the ship.

While cruise-only fares on Europa 2 start at €600 ($800) per person per night, fly/cruise fares on Viking Star will start at $420. The main difference is a passenger space ratio of 52 gross tons per passenger on Viking Star compared to 83 tons on Europa 2, but even at that, 52 is at least 25% more space than offered by many other new ships that are being built today.

Last Wednesday a ceremony was held at the Monfalcone yard of Fincantieri to mark the keel laying of the largest cruise ship ever built for the UK market. The 141,000-ton 3,611-berth cruise ship is scheduled to enter service in March 2015.

However, Royal Caribbean’s 154,407-ton 3,634-berth Independence of the Seas, which has been trading from Southampton since 2010, will still outrank her in both tonnage terms and in number of berths. The new P&O flagship will have a passenger space ratio of 39 gross tons per passenger.

Based on the design of Princess Cruises’ Royal Princess, which is to be christened in Southampton next month, and her sister ship Regal Princess, the new P&O ship will bring an unprecedented number of passenger amenities to the P&O Cruises brand.

She will combine the classic features of ships such as the 1,866-berth Aurora and 1,870-berth Oriana with the wide choices of the 3,096-berth Azura and 3,092-berth Ventura, as well as a number of concepts yet to be announced. Under the traditional P&O brand, the new flagship will be designed to attract new cruisers as well as repeat passengers. 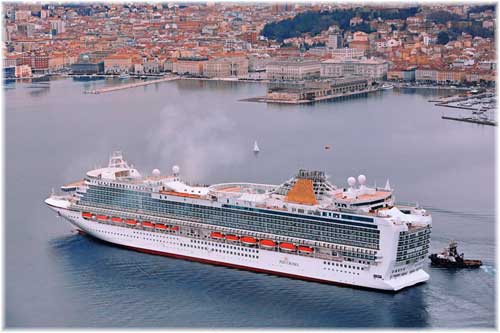 These were not the first P&O cruise ships to be built in Italy however, as its first dedicated cruise ship, the 736-berth Spirit of London, a ship that has originally been ordered by Norwegian Caribbean Line, had been completed for P&O in Italy back in 1972.

No name has yet been announced for the new flagship, nor have any details been released concerning her internal layout, other than that British hotel design company Richmond will oversee the ship’s interiors to reflect various aspects of P&O’s history.

The new Marshall Islands-registered cruise ship Pearl Mist has finally been accepted by her owners, Pearl Seas Cruises, after four years of legal disputes between Pearl Seas, a sister company of American Cruise Lines, and her Canadian builders, Irving Shipbuilding Inc of Halifax.

A second order at Irving for a slightly larger vessel was cancelled in the process.

One important feature of the new ship is that all her cabins come equipped with a private balcony. Passenger space ratio for this new coastal cruiser works out at 24 gross tons per passenger. Her crew will number 65, with American officers supervising an International crew.

The Pearl Mist is the first cruise ship to have been built in Canada since the 5,825-ton Prince George of 1948.

A comparison of these two ships is interesting: 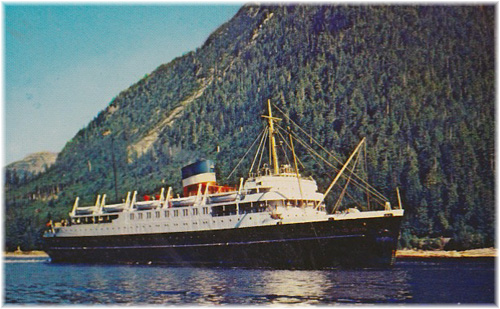 The Prince George cruised from Vancouver to Alaska for more than a quarter of a century for Canadian National, before passing to a series of different owners. She last operated cruises in 1981 and 1982 and then served as a floating hotel for Expo ’86 in Vancouver in 1986. After a fire hit her while laid up on the British Columbia coast in 1995, she was finally lost while being towed to an Asian shipbreaking yard in 1996.

Only three other overnight cruise ships have been built in Canada since the Prince George. These were the 1,477-ton 100-berth Norgoma of 1950, now a museum ship at Sault Ste Marie, Ontario; the 1,486-ton 130-berth Lake Winnipeg cruise ship Lord Selkirk II of 1969, shortly due to be broken up at Winnipeg; and the 463-ton 60-berth Canadian Empress of 1981, still in operation in her 33rd season on the St Lawrence and Ottawa Rivers.

Although completed in April 2009, Pearl Seas refused to accept delivery and the ship has been the subject of legal disputes for almost four years while laid up at Irving Shipbuilding’s facility at Shelburne, Nova Scotia.

Ironically, this ship’s idle period started at the beginning of her career rather than at the end of it, as was the case with the Prince George. While no resolution to this dispute was found, Pearl Seas has now cancelled five cruise seasons in all, from 2009 through to 2013.

As originally intended, the new ship will operate 7-, 10- and 11-night cruises in the Great Lakes and St Lawrence Seaway and on the East Coast. Her inaugural cruise, departing June 28, 2014, is an 11-night sailing from Baltimore to Halifax, her birthplace.

It seems unlikely that more cruise ships will be built here, however, especially as the Canadian dollar has strengthened by more than 11% since 2009, when this ship was completed.

Pearl Seas plan seventeen cruises for 2014, beginning in June and ending in November, with itineraries including the Atlantic Coast between Baltimore and Halifax, the Canadian Maritime provinces between Halifax and Quebec, the St Lawrence Seaway and Thousand Islands between Quebec and Toronto, the Great Lakes and Georgian Bay between Toronto and Chicago and the Southeast United States between Baltimore and Nassau.