Is CLIA Off Message? – Other Cruise News: UK Cruise Lines Could Be Breaking Competition Law – Norwegian vs Facebook

In remarks to Seatrade Insider made earlier this month, Bob Dickinson, former president and chief executive of Carnival Cruise Lines, who has been retained by Carnival Corp & plc as a consultant, suggested that the Cruise Lines International Association (CLIA) should be getting back to its old role of marketing the cruise industry. CLIA president Christine Duffy acknowledged as much in a speech she delivered last week at the CLIA Cruise360 conference in Vancouver, confirming CLIA’s continued commitment to travel agents. This was done to counter talk that it had changed from being a group focused on agents to a global lobbying organisation. In February, Norwegian Cruise Line and Facebook both listed on the Nasdaq, at similar opening prices of around $28. We look at what has happened since. And finally, we have a look at UK cruise operators and the law.

Is CLIA Off Message?

As we reported on June 10, former Carnival Cruise Lines president Bob Dickinson has been engaged by Carnival Corp & plc as a consultant to try to help its American brands Carnival, Princess, Holland America and Seabourn to improve their business outlook with travel agents.

In his first interview after this news was announced, with Seatrade Insider on the same day, Dickinson is said to have “ventured an opinion about the cruise industry as a whole after ‘watching CLIA and all the stuff that’s been happening in the last year and a half,” with the message focusing on safety.

“Safety is a given,” he is reported to have told Seatrade.

And as we reported on May 28, “last Wednesday, when no one was expecting it, the new global Cruise Lines International Association (CLIA) made one of the most astonishing announcements ever to come from what is supposed to be a marketing organization. It announced a so-called bill of rights for cruise passengers.”

That action came out of the recent travails of Carnival Cruise Lines with the Carnival Triumph.

These are subjects that should be dealt with more behind close doors and not in public press releases. Talking in public about the industry’s problems simply attracts its attention to its shortcomings, and it is probably time that a more positive outlook was taken. The lobbying, which was always carried out from Washington and still consumes about $1.5 million a year, should probably be done with less noise. Previously conducted by the International Council of Cruise Lines, that body was merged into CLIA in 2006, when it became its Washington office.

Meanwhile, on the announcement of the so-called cruise passengers bill of rights, we said, “this idea is nothing more than a cruise line code of conduct dressed up in other clothing. Cruise passengers are not downtrodden masses needing protection, as CLIA seems to portray them. And there are far more important things for CLIA to be doing than over-reacting to the press releases of a single senator.”

If we are to judge from what Dickinson told Seatrade Insider, he agrees. CLIA should long ago have switched back from talking about safety to concentrating on the cruise product and what amazing value it is. It’s been a year and a half since the Costa Concordia tragedy and all the talk about safety, while possibly reassuring, has also probably cost the cruise lines a lot of first timer cruisers, who have been scared away by the discussion.

If one is to judge from the releases from CLIA over the past year and a half it takes itself far too seriously. First, by acting in unison, CLIA and its global partners “rescued” the cruise industry from the ignominy of Captain Schettino’s incompetence on the Costa Concordia.

This event in turn provoked the coming together of all these global cruise organisations into the hegemony of a global CLIA. And now, it’s a so-called cruise passenger bill of rights,

Dickinson is right, of course. As he told Seatrade, “the main message is that we offer really terrific vacations and strong satisfaction at a very high value, and we’ve gotten away from that.”

In adding that this had likely cost the industry in fewer first-timer cruisers, he told Seatrade “we’re a vacation industry. We need to get back to our core values and be much more dynamic.”

With both shares trading at around $28 on February 8, we decided to keep an eye on Norwegian (NCLH) vs Facebook (FB) for a while. Here are the last four months results and Friday’s price for each: 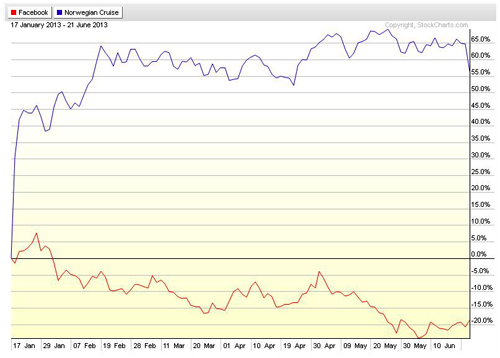 Neil Baylis a partner at international law firm K&L Gates, told an Association of British Travel Agents law seminar in London recently that attempts by cruise lines to stop agents from rebating part of their commission to clients could justify a complaint to the Office of Fair Trading.

Noting that the issue is being closely watched, he suggested that there might be grounds for someone to make a complaint, adding that it is clearly not far away from what has been taking place in the hotel industry, where the Office of Fair Trading is investigating alleged infringements of competition law in the supply of hotel rooms by Expedia, Booking.com and InterContinental Hotels.

There is a difference, however, in that in the hotel case the discussion is over rates while in the case of cruises the activity of the cruise lines has been in trying to stop rebating by agents from their commission in order to “buy” business by cutting the level of commissions to as low as 5% in the case of P&O and Cunard.

Baylis did note, however, that it would be brave for anyone to bring a complaint, as it would risk their commercial relationship with the cruise supplier, a step that no one wants to take. Most agents who are unhappy with cruise suppliers who have reduced their commission levels simply start selling alternative products.

Switch-selling is not entirely the answer though as a recent survey has revealed that when Brits search for a cruise more than two-thirds of them search for a particular brand, and brand loyalty will prevent loyal supporters of say P&O from accepting say Royal Caribbean instead. On the other hand, Royal Caribbean is fond of saying that a cruise is sold and not bought.

Baylis warned that agents who boycott suppliers risk breaching the law, saying that if agents got together and decided not to sell a company’s products they would be infringing competition law. This point is irrelevant however as agents do not group together to boycott suppliers but act independently.

In terms of breaking the law, a point that Baylis did not raise was that cruise lines today frequently proscribe cross-border sales, something that in itself is a restraint of trade.

Transatlantic voyages on Cunard Line’s Queen Mary 2, for example, can be as much as 25% more expensive in the UK than in the US, although this will vary by voyage.

Again, however, no one has brought a complaint before the European Commission, a body that took action against cross-border selling constraints when they were used by Apple in its sale of iTunes within Europe. In that case, in 2008 the European Commission forced Apple to reduce the price of downloads for UK customers, as a result of a complaint started by consumer group Which?

When the Apple complaint was filed in 2007, UK prices were 10% to 20% more than elsewhere in Europe. As evidenced in an earlier European decision against Microsoft, fines for such activity within Europe can be up to 10% of turnover, as opposed to profits.

The European Commission maintained that Apple was breaking article 18 of the EC treaty governing restrictive business practices by illegally limiting where customers could purchase tracks and setting prices higher in certain jurisdictions. Apple was threatened with a fine of up to $600 million, but after agreeing to equalise its iTune pricing across Europe the commission took no further action. The result for consumers, however, was a 15% drop in the price of iTunes downloads in the UK.

Any comparison is difficult, however, as in the case of cruises, in many cases it is likely that the UK is getting the lower prices at the moment. This is especially true if one judges by comments coming from cruise lines. While Norwegian has left the UK market, regarding it as too competitive, so have others such as Costa and now Carnival. On the other hand, Royal Caribbean International and Celebrity are both adding capacity.