Last week came the news that Regent Seven Seas Cruises had finally ordered its long-anticipated fourth ship, a 738-berth 54,000-tonner that will have a passenger space ratio of more than 73 gross tons per passenger. This compares to the new record of 80 tons per passenger on Hapag-Lloyd Cruises’ Europa 2, introduced this May. Elsewhere, Queen Mary 2 completed her 200th North Atlantic crossing this weekend and has now carried about 500,000 Transatlantic passengers. Meanwhile, MSC Cruises will double its ex-UK presence in September 2014 with the addition of the MSC Magica to the UK-based MSC Opera and has announced a new UK boss.

Last week Regent Seven Seas Cruises announced that it had entered into a contract with Italy’s Fincantieri shipyard to build a fourth ship. The new all-suite, all-balcony ship will be named Seven Seas Explorer and is scheduled for delivery in Summer 2016.

At 54,000 gross tons and accommodating 738 guests, Seven Seas Explorer will be the largest vessel in Regent’s fleet, and will boast one of the highest space ratios and staff-to-guest ratios in cruising.

The new ship is part of Regent’s strategy for expansion in the luxury market. Since purchasing the Regent Seven Seas brand in 2008, its ships have sailed full with industry-leading yields, and expanding the fleet will allow for a greater choice of itineraries.

Seven Seas Explorer will feature spacious and sophisticated designer suites, elegant public areas, six gourmet restaurants, an expansive spa, a signature nine-deck atrium, two-story Explorer Theatre and the many other amenities that can be expected from an upmarket line. 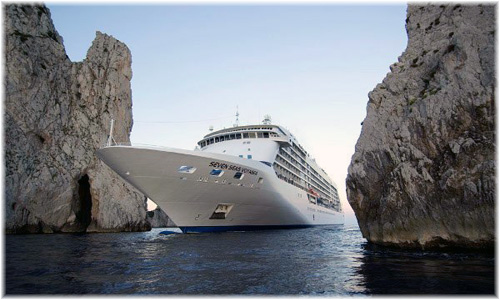 The onboard use of exotic stones and polished woods, designer furniture, rich fabrics and sophisticated lighting, combined with a museum-quality eclectic art collection, will position Seven Seas Explorer in its own sector in ultra-luxury cruising.

Riviera at Barcelona on the eve of her christening. Photo courtesy Peter Knego – MaritimeMatters.com

Further design aspects will be announced later but when they are it will be interesting to see the differences and similarities between the new Regent ship and sister line Oceania’s larger and more recently-built Fincantieri newbuildings, the 66,084-ton 1,250-berth Marina (2011) and Riviera (2012).

Other ships to be delivered in 2016 include Viking Cruises’ second new 47,000-tonner, two new ships for Royal Caribbean, its third Quantum class and third Oasis class ships, and one new ship each for three Carnival brands – Aida, Carnival and Holland America.

Cunard Line’s flagship Queen Mary 2 completed her 200th North Atlantic Crossing on Saturday, when she arrived at Southampton from New York, from whence she had sailed on Saturday July 6.

Queen Mary 2 is the largest, longest, widest and most expensive ocean liner ever built, and is now the only ocean liner in regular service. On board for the voyage were keynote speakers presenting talks about the ship, as well as special Big Band performances.

In the course of Queen Mary 2’s 200 Transatlantic Crossings, Cunard Line has now carried half a million Transatlantic passengers in her.

To commemorate her 200th Crossing, Stephen Payne OBE, who was responsible for the overall design of Queen Mary 2, presented his own insight into the ship’s construction.
“Queen Mary 2 embodies the attributes of a true liner, including reserves of stability and deep draught. Combined with her great size, these attributes ensure that the ship can achieve a level of Atlantic sea-keeping superior to any other liner in history,” said Payne. “No other passenger ship is as much at home on the North Atlantic as Queen Mary 2.”

MSC To Double Its Ex-UK Fleet Next September

MSC will temporarily double its ex-UK fleet next year when it bases its MSC Magnifica in Southampton for a short series of cruises from September 2014. The 86,600-ton, 2,550-passenger Magnifica will join the 58,600-ton, 1,756-passenger UK-based MSC Opera.

The Magnifica will offer four seven-night, round-trip cruises departing from Southampton and calling at Zeebrugge, Amsterdam, Hamburg, and Le Havre, with fares starting at £429 per person including free parking or coach transfer to Southampton.