Viking Star Floated Out At Marghera – Other Cruise News: Saga Takes Space With MSC Cruises – What Happened In 1914

Last week saw the float out at Marghera of the latest thing in ocean cruising. Viking Cruises’ Viking Star is a ship that is very traditional and yet is right up to date, with every stateroom having a balcony. We also look at Saga’s move back into outsourcing cruises, something it has not done in a major way since the 1990s. And we look back at passenger shipping a century ago, how the war delayed the building of fifteen liners, and how it would denude the Hamburg America line of its six best ships.

Viking Star Floated Out At Marghera

Last week, Viking Cruises floated out its first ocean-going cruise ship, the 47,800-ton 930-berth Viking Star. This event marks the introduction of one of the most important cruise ships in some years. On one way, she marks a return to the roots of traditional cruising, where destinations and the sense of being at sea, rather than at some fun fair, are an important part of the cruise product.

At the same time, she is a step forward as every passenger cabin on board comes with a balcony.

The ceremony took place on Monday, June 23, at Fincantieri’s Marghera shipyard near Venice. With four sister ships now under construction, Viking Star will be the first to debut, in May 2015m with maiden voyages in Scandinavia and the Baltic.

The next to be introduced will be the Viking Sea and Viking Sky, while the fourth ship has yet to be named.

“Today is a proud day for our entire Viking family, as we are one step closer to launching a new era of ocean cruising,” said Viking Cruises Chairman Torstein Hagen last week. “Viking Star’s maiden season was sold out before she even touched water, which just demonstrates how enthusiastic our guests are for destination-focused ocean cruises.”

Following a two-day process that set Viking Star afloat, she was moved to a nearby outfitting dock for final completion. At 745 by 95 feet, these new ships will be slightly larger than one of the world’s most famous cruise ships, the Green Goddess, otherwise known as Cunard Line’s 34,183-ton Caronia of 1949, which measured 715 x 91 feet and also carried 930 passengers.

The new ships will feature many premium amenities and services, including

– all cabins have a private balcony
– a two-deck high observation lounge at the forward end
– a complete walk-around promenade deck beneath the lifeboats and tenders
– the main dining room has floor-to-ceiling windows that slide open
– al fresco dining is available
– the first true infinity pool at sea
– the spa has been vanquished from deck 9 on top to deck 1 below.

Saga has been in cruising for more than thirty years. Starting with river cruises in the 1980s, it moved into ocean cruising in the 1990s and later that decade it became P&O Cruises’ single largest customer, back when P&O had just two ships. At the time, it also booked passenger with Fred. Olsen Cruises.

Then Saga introduced its own ships, giving it control over its own itineraries and on board service. Its most popular ship, the 584-berth Saga Rose, was introduced in 1997 and has been followed by others over the years. Today its fleet includes the 706-berth Saga Sapphire and 446-berth Saga Pearl II.

But having its own fleet no longer gives Saga the capacity it needs to satisfy its members.

It currently carries about 30,000 passengers annually in its own ships but is looking to expand its cruise business. In an effort to do so, last month it signed up with Fred. Olsen Cruise Lines to take an allocation on each of their four ships, on a range of 2014/15 cruises, focusing on products from UK ports that do not compete directly with Saga’s own offerings.

Since then, Saga has also negotiated deals with Azamara Club Cruises and Celebrity Cruises, which are bookable through both Saga and Saga subsidiary Titan, which accepts bookings from agents as well as the general public. This may prove interesting as Titan already book ocean cruises with Fred. Olsen and Norwegian Cruise Line, as well as parent company Saga.

Last week, came further news when it was revealed by Saga that ir would also be taking an allocation of fly/cruise berths on each of the twelve ships in the MSC Cruises fleet from next week. This will certainly enlarge the Saga offering into the big ship category as MSC’s largest will carry 4,500 (lower berths only), compared to the 2,850 or so on Celebrity’s “Solstice” class ships.

Customers booking cruises through Saga automatically enjoy a range of added extras including VIP door-to-door service to and from the port or departure airport, and free travel insurance, on board travel escort and a Saga cocktail party.

The intention of outsourcing these cruises is not to recruit Saga passengers to book on other lines but to build new cruise business and expand Saga’s penetration in a UK market of 1.1 million cruisers above the age of 50.

Before the recent recession, Saga had actually been mooted as an potential source of new orders for cruise ships of their own design,. It would appear that this step will allow Saga to increase its cruise business while continuing to assess the eventual possibility of building their own ships.

Funnily enough, a design that just might interest Saga would be the ships now being built for Viking Cruises, which are said originally to stem from a concept for Oceania that was never taken up. Instead, Oceania built the larger 1,250-berth Marina and Riviera.

Last week, much of the news remembered the events at Sarajevo on June 28, 1914, when a Serbian assassin shot and killed Archduke Franz Ferdinand and his wife Sophie. What followed a little more than a month later was the First World War.

There is a part of this story that is little-remembered these days, and that is that at the time shipyards in Europe were particularly busy building great ocean liners, predecessors not only to the jumbo jet but also today’s giant cruise ships. When war broke out in early August, work was stopped on many of these vessels. Today, we outline very briefly the effect of that war on passenger shipping.

The spring of 1914 thus saw the three largest ocean liners ever built perform their maiden voyages, with the Vaterland sailing from Cuxhaven, near Hamburg, on May 14; Cunard Line’s 45,647-ton Aquitania from Liverpool on May 30; and the Imperator from Cuxhaven on June 10, all bound for New York and all within less than a month.

Succeeding the three “Imperator” class ships were three more moderately sized ships of the “Tirpitz” class, all launched in 1914. Of these, work on the 21,498-ton Tirpitz and the 20,200-ton William O’Swald was halted for the duration of the war, but the third, the 19,980-ton Johan Heinrich Burchard, was completed in November 1915.

Many ships were completed in 1914, including twenty important liners, the most important of which was Cunard Line’s Aquitania. Three more ships were completed for Cunard Line, three for Canadian Pacific and Allan Line and others for Hamburg-Süd, Pacific Steam Navigation, P&O, Union-Castle and other owners in Britain, France, the Netherlands and Denmark. A few were also completed in 1915. 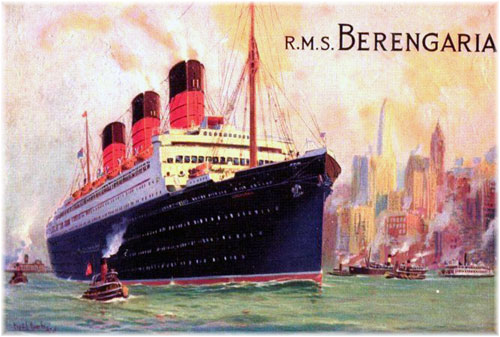 But work was halted on many that were in an early stage of construction. In addition to the Bismarck and the “Tirpitz” class trio, construction was halted on a dozen more. Most important of these were the 34,569-ton Paris for Compagnie Générale Transatlantique, which was not completed until 1921; North German Lloyd’s 34,351-ton Columbus (i), which became White Star Line’s Homeric in 1920; and NDL’s 32,354-ton Hindenburg, which was completed as their Columbus (ii) in 1923.

Others on which construction ceased included one ship each for Red Star Line, Navigazione Generale Italiana, the American Line and Cunard Line, two for P&O Line and another for Orient Line. One exception, on which work was resumed, was Holland America Line’s 32,234-ton Statendam, which was completed as the troopship Justicia in 1917 but torpedoed by two German U-Boats in July 1918.

The war of course changed the course of history. After the war, the Imperator became Cunard Line’s Berengaria, the Vaterland United States Lines’ Leviathan and the Bismarck White Star Line’s Majestic. More ships of state than cruise ships, this trio nevertheless offered many cruises during their careers. Between her Atlantic crossings, the Berengaria became well known for Prohibition cruises from New York to Nova Scotia and in some ways was a predecessor to the Queens.

Meanwhile, of the smaller trio, the Tirpitz became Canadian Pacific’s Empress of Australia while the other pair eventually became United American Line’s Reliance and Resolute. All three ships, as well as running Transatlantic, became cruise ships in the off-season and also performed world cruises. Interestingly, the Reliance and Resolute became the first cruise ships to fly the Panamanian flag, which they did to escape Prohibition in 1923.

So as a result of the Treaty of Versailles, all six of the “Imperator” and “Tirpitz” class ships were lost to the Hamburg America Line, going instead to British and American operators as war reparations.