This week comes much news, with an order for another mid-size ship by Seabourn and pending orders for three more by Silversea, while the first of Viking’s new class enters service in just six months now. Elsewhere, Celebrity Cruises is introducing a new class of ship, just slightly smaller than the Solstice class, while Virgin Cruises has announced a chief executive for its planned two-ship Florida-based operation.

Starting with the delivery of Oceania Cruises’ 66,084-ton Marina and Riviera in 2011 and 2012 and Hapag-Lloyd Cruises’ 42,830-ton Europa 2 last year, along with orders for six 47,800-ton ships by Viking Ocean Cruises, the first of which is to enter service in May 2015, vessel orders and deliveries have recently shown an increase in the more traditional size sector between 40,000 and 70,000 tons. 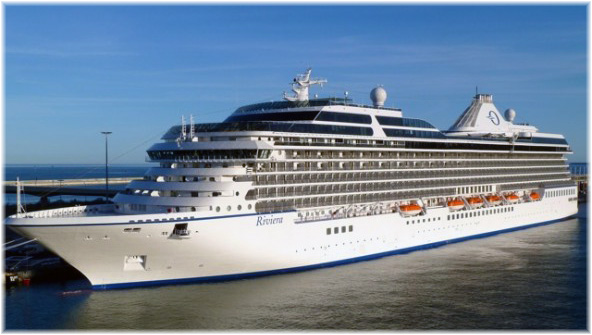 MV Riviera at Barcelona on the eve of her christening (Photo courtesy Peter Knego – MaritimeMatters.com)

This was reinforced last month by the order from Seabourn for the second of a new class, which calls for two vessels of 40,350 tons capable of carrying 604 cruisers, to be delivered in 2016 and 2018.

What is interesting is that since Holland America Line Group took over management of Seabourn, in tonnage terms these ships will be larger than Holland America’s 38,848-ton Prinsendam, which operated as Seabourn’s largest ship when she was the Seabourn Sun between 1999 and 2001.

Another example of the divergence into mid-size cruise ships of 751 to 1,750 berths (using Douglas Ward’s measure of this at the Berlitz Complete Guide to Cruising and Cruise Ships), may be the impending Silversea order for three Chinese-financed ships to be built by Fincantieri.
No details have yet been released on these ships but they are likely to be below the 751-berth limit described above. 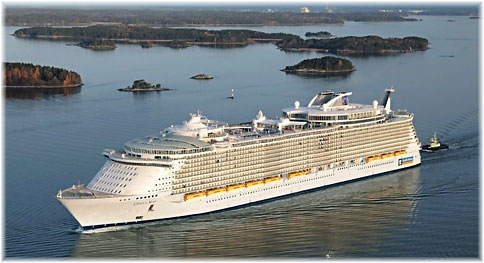 The days of 250,000-ton Oasis class ships are not over of course, as while Royal Caribbean has more recently come up with the more moderate 4,180-passenger Quantum size, it continues to experiment with the Oasis in Europe and has indeed ordered two more Oasis units for delivery in 2016 and 2018.

Also, Norwegian Cruise Line is reportedly in discussions with Meyer Turku about building a ship that will be even larger than the Oasis class vessels.

In the long run, it is quite possible that ships of this size may find another home in the Far East market.

But it is interesting that as the megaships find their own markets, so do the midsize cruise ships that resemble those of yore. 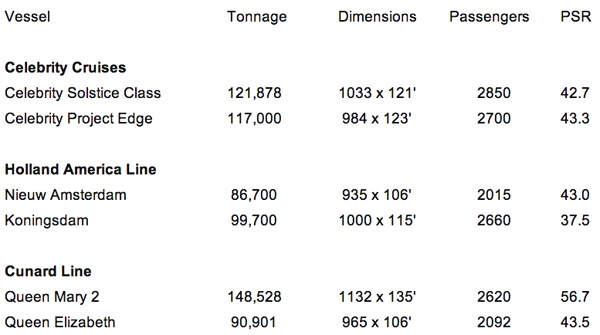 “Our new class of ship will set the standard for premium world travel and deliver the next generation of modern luxury experiences that our guests know and love,” said Michael Bayley, president and chief executive officer of Celebrity Cruises.

For all intents and purposes, however, it appears that Holland America Line is lowering its space ratio per passenger by more than an eighth while Celebrity is actually increasing its own and Cunard Line still beats both lines overall.

Virgin Group To Branch Into Cruising

With interests in airlines, trains and space travel, billionaire entrepreneur Richard Branson confirmed last week his Virgin Group now plans to go to sea. Branson’s investment group has announced that it will partner with Bain Capital Corporation to form Virgin Cruises, a Florida-based company that plans to build and operate two new cruise ships. The total investment is estimated at $1.7 billion.

Tom McAlpin, a former president of Disney Cruise Line and, more recently president and chief executive of The World, Residences at Sea, has been named ceo of Virgin Cruises. “Cruise guests deserve something better and different to what is being offered today, and Virgin Cruises is committed to creating breathtaking experiences for them and a new generation of guests,” McAlpin said in a statement.

Virgin will be trying to attract a broader market than traditionally goes cruising. Branson promised his company’s ships would offer “great quality, a real sense of fun, and many exciting activities all delivered with the famed Virgin service. We plan to shake up the cruise industry and deliver a holiday that customers will absolutely love,” he said in the statement.