Three Cruise Ships For 2015 – Other Cruise News: Dynamic Dining Not A Complete Success

Today sees the christening in Southampton of Royal Caribbean’s new 168,666-ton Anthem of the Seas, while Viking Ocean Cruises’ 47,842-ton Viking Star leaves Venice on her way for her own christening in Bergen next month. The 10,992-ton Le Lyrial will meanwhile make her own maiden voyage from Venice on May 9. This week we compare the three ships, each part of a quartet, while we also assay the implementation of Royal Caribbean’s new Dynamic Dining concept.

As Royal Caribbean’s 4,180-berth Anthem of the Seas is being christened in Southampton today, so Viking Cruises’ 928-berth Viking Star is cruising from Venice, bound eventually to Bergen, for her own christening on May 17, and Ponant’s 244-berth Le Lyrial is undergoing trials for her own introduction in less than three weeks time. 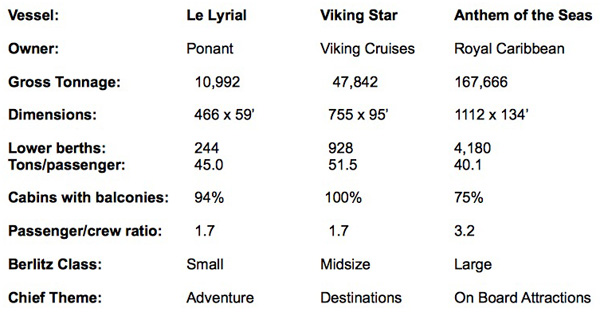 Just as Le Lyrial is the last of four ships of the same class for megayacht operators Ponant, Viking Star is the second of four (possibly even six), for upper premiun line Viking Ocean Cruises, and Anthem of the Seas is second of four “Quantum” class ships for mass market Royal Caribbean International.

Le Lyrial’s maiden voyage, an 8-day itinerary in the Adriatic, sets out from Venice on May 9 and she will operate this summer in the Med. In future years it is planned that she will cruise in Alaskan waters during the summer and in Australia and New Zealand by winter.

Viking Star will undertake a number of pre-inaugural Mediterranean voyages before arriving in Bergen for her christening celebrations on May 17, Norway’s National Day. She left Istanbul on April 11 and leaves Venice today headed west and north.

As for Anthem of the Seas, after today’s christening ceremony, she will sail on her maiden voyage on Wednesday on an 8-night “France and Spain” cruise to Vigo, Gijon, Bilbao and Le Havre.

But the most interesting thing about this trio of new ships is their sheer difference in size. The Viking Star is more than four times as large as Le Lyrial while Anthem of the Seas registers fifteen times the tonnage and is three-and-a-half times the size of the Viking Star.

As might be expected, the largest ship has 75% balcony cabins, while the smaller and more affluent ships feature almost all balcony cabins.

If one wants crowds, diversions and amusements, one knows where to go, but equally if one wants peace and quiet and a sense of exploration tofay’s market is well catered for, with a choice between mega yachts and more traditional and inclusive ships carrying a reasonable and sociable number of passengers at reasonable prices.

Dynamic Dining Not A Complete Success

Royal Caribbean International appeared to have gone further than Norwegian Cruise Line’s “Freestyle” dining when it introduced what it called “Dynamic Dining” on the new Quantum of the Seas last year, at the same time dispensing with the concept of a main dining room.

Royal Caribbean claimed to its clients that you will “now have the ability and flexibility to entirely shape your culinary journey onboard ‘Quantum’ class ships.”

Leaving the split infinitive aside, the statement went on to say the following:

“Traditional dining consists of two dining times (Main and Late) in a main dining room. The Dynamic Dining experience encompasses the entire landscape of 18 unique dining venues.
“The main dining room has been reimagined as five main restaurants, each with their own distinctive menu and ambiance. There are no set dining times, no strict dress codes, no assigned seats.”

The concept of a main dining room had for all intents and purposes been shunted aside and replaced by something foreign to many of the line’s guests.

Royal Caribbean then went on to say:

“In order to satisfy all guests’ preferences, we encourage guests to make restaurant reservations prior to their cruise. However, once onboard, guests will have the ability to make and edit reservations.”

This is fine, perhaps, except that it intended that reservations be handled on a “first come, first served” basis.

Now let us have a look at two items in Royal Caribbean’s Q&A on this subject:

“Q: What if I want the same waiter every night?
A: Waiters are dedicated to a specific restaurant. Guests can request the same waiter when they dine in the same restaurant and will be accommodated based on availability. However, we recommend guests to experience a different restaurant each night.

When any supplier starts recommending that its customers do what they don’t want to do therein lies not marketing but coercion, and possibly where this plan went wrong

What happened next was not happy, revolving around not only the difficulty of getting reservations to accord with Royal Caribbean’s intentions, but also long lines to dine and slow service once seated.

The solution was announced thusly in “Cruise Critic” in February:

“Following negative feedback from passengers about its new Dynamic Dining concept, Royal Caribbean will add a ‘Classic’ Dynamic Dining option to new ship Anthem of the Seas when it debuts in April, allowing cruisers who prefer a set-time experience to have dinner with the same tablemates and waiters each night.”

More recently, Royal Caribbean ceo Michael Bayley went further, sending an email to all past passengers of the Quantum of the Seas with an offer of a $100 per cabin onboard credit towards a future cruise on Anthem of the Seas. This has a tight window though and must be booked before the end of May.

Meanwhile, Royal Caribbean described these options, which come into force with today’s christening of the Anthem of the Seas, this way:

Dynamic Dining ‘Classic’ is a new option for those who prefer the traditional main dining style with the same dining time each night, with the same waiters and dining companions throughout the cruise. Dynamic Dining Classic is available on a first come, first served basis.”

Of course, this latter “option” is not Dynamic Dining at all. It’s just a name to save face as Royal Caribbean reinstates the good old-fashioned set table, set time, set waiter system that has always existed on cruise ships, but it does show that Royal Caribbean listens to its guests.

Plans to expand the Dynamic Dining program to other ships in the fleet, including Oasis of the Seas and Allure of the Seas, have meanwhile been postponed indefinitely. In fact, in the case of the Quantum of the Seas, a new dining regime may be put into place entirely.