Earlier this month, Norwegian Cruise Line announced that it would be introducing a new all-inclusive policy to its 3- and 4-night Miami-Bahamas cruises on the Norwegian Sky, with effect from 2016. Elsewhere, Royal Caribbean International has introduced a new policy of no cruise discounting within 30 days of sailing. Applied first in North America this policy will probably follow later in Europe. Both moves are innovations.

Beginning in 2016, Norwegian Cruise Line will offer all-inclusive cruising on its 3- and 4-day cruises from Miami to the Bahamas aboard its 2,002-berth Norwegian Sky. From January, guests sailing to the Bahamas will enjoy an all-inclusive experience with dining, entertainment and now free wine, beer and spirits included in the fare.
Until now, the best one could expect on the line’s Bahamas cruises was the popular happy hour before dinner. 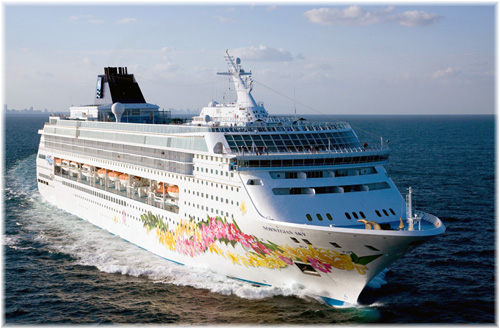 Andy Stuart, president of Norwegian Cruise Line, said “We’re taking Freestyle Cruising to the next level to provide our guests with an experience unmatched by any other contemporary cruise line. Norwegian Sky guests will have the freedom to enjoy a cruise holiday the way they desire – whether it’s lounging by the pool with a margarita, having a laugh at a comedy show, catching up on their favourite book on their balcony, or indulging in fine dining – all included in their cruise fare.”

“We think this is a stand-out change,” said Stuart. “The 3- and 4-day market is important to us. It’s a market where we introduce new people to cruising. We really thought it was a way to differentiate Norwegian Sky by making it an all-inclusive product.”

Stuart says the line has no plans beyond Norwegian Sky.
“It’s ultimately driven by demand,” he said, but added “we’ve raised prices a little bit in advance of the announcement. Over time, demand will determine price.”

On the rest of the Norwegian fleet, it was announced earlier this month that many of the line’s Asian food outlets have now become free of change.

So guests can now indulge in favourites such as fried rice, spicy seafood, udon noodles and steamed pork dumplings free of charge at the following venues:

Back to the Norwegian Sky, Norwegian’s 3- and 4-night Bahamas cruises were among the first to be introduced by the line fifty years ago using the 8,666-ton 550-berth Sunward, a European cruise ferry adopted for Caribbean cruising.The first voyages between Miami and Nassau that were actually offered and advertised as all-inclusive stay-aboard cruises were made by the Clarke Steamship Company’s 3,445-ton 175-berth New Northland, eighty years ago, in 1935.

Royal Caribbean has now ended its policy of offering last minute discounted cruise in North America and is likely to make a similar move soon in Europe.

Chairman and ceo of Royal Caribbean Cruises Richard Fain said the practice upsets customers who book early and can’t qualify for the new deals, confuses travel agents and is damaging to brand integrity.

“As a result in March we adopted a new policy that we would not do any last minute discounts on bookings in North America,” Fain said.
“Depending on the type of cruise, that last minute may be 10, 20 or 30 days out, but from that point on we will hold our price at the prior level.”

“This may cost us bookings in the short term and our guidance may reflect that, but we believe the long-term advantage for our brands is worth the small short-term cost. Over time, we believe this will lead to happier guests, happier agents, and better branding,” he said.

“We think getting our customers out of this used-car salesman kind of mentality will be good overall for the brand, good for their experience, and therefore lead to higher yields in the long run.”

“Obviously, the reason that we have been doing last-minute discounts is because the ship wouldn’t otherwise be absolutely full, and so while the number is small, we’ve used it to top up,” he said.

“There’s less topping up, so you don’t get the revenue from those last passengers. It may take a little while for travel agents and consumers to understand just how serious we are about this.”

Royal Caribbean International chief executive Michael Bayley added that the company was looking at extending the policy to other markets, including the UK where it launched its newest ship, the Anthem of the Seas, earlier this month.

“From 2016, the price will never drop. There will be no discounts beyond 30 days from departure,” said Bailey.

This move may come as a blow to those who count on waiting till the last minute for cheaper fares, but it will keep some more grasping types who always shop on price off Royal Caribbean ships and leave them on others.

It will thus serve to produce a more amenable on board atmosphere, being rid of the types who brag about their deal. Nothing can be worse than someone at dinner boasting that they have paid several hundred dollars less than you for the same or better accommodation!