With the imposition of the new Emission Control Areas throughout Europe and North America reducing the maximum sulphur content in fuel to 0.1%, and 0.05% next year, there is now a move towards using LNG as a clean fuel for cruise ships. By burning LNG, large passenger ships are able to reduce their CO2 emissions by 25%, NOx by 85 to 90% and SOx to practically nothing. LNG fuel is clean, producing very low particle emissions, no visible smoke and no sludge. And as a bonus it is cheaper than marine diesel oil. There are problems however. LNG’s volume is 1.8 times that of diesel fuel, and with the necessity of using highly-insulated cylindrical tanks, the space required for bunker storage is almost four times what is required for conventional square tanks. Availability is another problem, but ships sailing within closed systems or on repetitive itineraries should be able to cope. Meanwhile, until such time as ships routinely fuel with LNG, it will require either dedicated fuelling stations or delivering LNG to the ships.

The big LNG news last week was that Meyer Werft is to build two new next-generation cruise ships for Costa Cruises, which will be the world’s first to run on LNG, and certainly the largest.

As announced previously, each vessel will exceed 180,000 tonnes and carry up to 6,600 passengers, more even than the larger “Oasis” class ships of Royal Caribbean.

The Costa ships will use LNG to generate 100% of the ship’s power both in port and at sea, a decision that will significantly reduce their exhaust emissions.

The two new Costa vessels will be built at Meyer Werft’s Turku shipyard, with deliveries expected in 2019 and 2020.

The pair will not be the first LNG-fuelled passenger ships to be built at Turku, however, as the yard produced the 57,565-ton LNG-powered overnight ferry Viking Grace for the Viking Line two and a half years ago.

With 880 passenger cabins, the Viking Grace has been running between Stockholm and Turku via Mariehamn since 2013. While at first it used diesel fuel, an LNG bunkering facility was soon completed in Stockholm.

Carnival Corp & plc has actually signed contract with Meyer Werft for four LNG-powered cruise ships, with the other two to be completed by Meyer Werft’s Papenburg yard for Aida Cruises.

Bernard Meyer, ceo of Meyer Werft, said, “In past years, we have built seven highly successful ships for Aida Cruises. We are honoured that Carnival Corporation has entrusted us with the implementation of this ambitious shipbuilding program, and we look forward to building these four magnificent ships.”

Aida is more than familiar with the use of LNG. It has contracted with Becker Marine Systems to build the LNG-power generating barge Hummel to provide power for its ships while they are in Hamburg. The first use of this facility took place when the Hummel was tied up next to the 71,304-ton AidaSol in Hamburg this May.

But although there are already a number of marine applications in overnight ferries and now power provision, the four new ships will be the first genuine cruise ships to use LNG.

The LNG-power generating barge Hummel to provide power for Aida ships while they are in Hamburg with AIDASol in the background. (Courtesy of AIDA Cruises)

A large number of cruise ships sailing in ECA’s will now need to comply with stricter environmental regulations, requiring the installation of scrubbers, the use of LNG as fuel, or a changeover from heavy fuel oil (HFO) to marine gas oil (MGO).

The difference in price between MGO and the HFO alone can increase fuel expenses by up to 40% And the cost of compliance and strongly fluctuating fuel prices have brought cruise operators to examine in more detail the viability of their future businesses.

Building to burn LNG or indeed converting to LNG, once the capital cost has been absorbed, presents what appears to be a viable solution for cruise ships that not only eliminates the need to fit scrubbers but also addresses the high cost of burning high distillate fuels.

In 2013, Norway’s Fjord Line placed into service the 31,678-ton sister ships Bergensfjord and Stavangerfjord. Each can carry 1,200 passengers (1,500 by summer) in day and night service between Bergen, Stavanger and Hirtshals in Denmark, as well as offering day service between Hirtshals and Langesund, in southern Norway.

The most interesting aspect of these cruise ferries, however, is that they are the largest passenger ships yet to be fuelled solely by LNG, being supplied with 30,000 tons of LNG per year at a new fuelling station near their normal berth in Stavanger.

The Stavangerfjord and Bergensfjord entered service in 2013 and 2014. Norway’s Bergen Group Fosen completed the two new ferries on hulls built at Gdansk, Poland.

Last month, North America took delivery of its first LNG-fuelled ferry when the 15,901-ton F. A. Gauthier was delivered to Société des Traversiers du Quebec. Completed at Fincantieri’s Castellammare shipyard in Naples, she is now in service on the Matane-Godbout-Baie Comeau route in the Lower St Lawrence River, having been officially inaugurated on July 13. 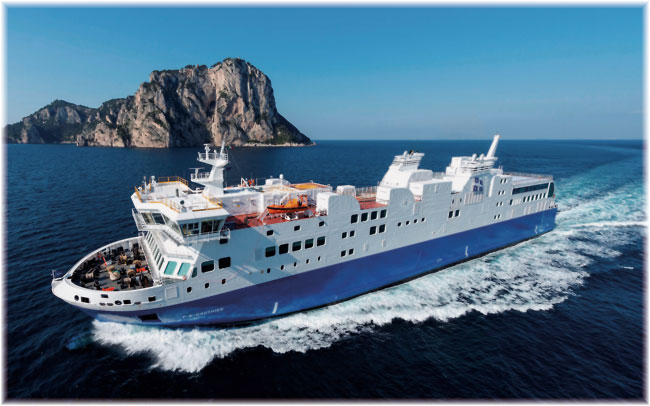 The F. A. Gauthier (Courtesy of Fincantieri)

Two smaller dual-fuelled ferries being built at Chantier Davie in Lauzon, Quebec, will also be placed into service on the company’s Saguenay River crossing at Tadoussac.

Fuelling for all three ferries has been contracted to Gaz Metro, a company that was at one time known as the Montreal Light, Heat & Power Co Ltd and had its own fleet of cargo ships. Gaz Metro will deliver LNG to the three new ferries by road in specially designed LNG-fuelled tanker trucks.

Not all has been progress, however. Initially, it had been intended to investigate LNG as a possible fuel for Viking Cruises’ new ships, but they are being built as oil-fired vessels rather than LNG-fuelled.

Brittany Ferries also placed an order for a new cruise-ferry that is to be its largest yet. But its original decision to go with LNG was revoked when the company was unable to obtain an exemption that would have allowed it to continue to burn heavy fuel oil in its older ships while it converted three to LNG fuel and three more to exhaust scrubber technology.

Costing €270 million, the new ship, being built at St Nazaire to enter service in late spring 2017, will now be oil-powered rather than gas-powered.

Last week it was announced that a €7 million grant had been made to Brittany Ferries by the EU Motorways of the Seas program to help fund the fitting of scrubbers to the Pont Aven, Armorique and Mont St Michel.

Similar grants have been made to DFDS Seaways, Finnlines, Scandlines and Stena Line, but they only cover about 8% of the overall cost.

Other ferry companies have been quick to announce LNG conversions.
In North America these include operators as diverse as BC Ferries, Washington State Ferries and the Staten Island Ferry, all of which operate large day boats, while in Europe, several newly-built LNG-powered ferries are already in operation, chiefly in Scandinavia.

Meanwhile, converting existing ships to run on LNG has become quite feasible. There are usually two methods proposed for such conversions.

The first is to take the ship out of operation to install LNG tanks and fuel handling systems in the existing hull. Such conversions reduce the number of cabins and possibly deck space too as LNG tanks require more space than standard fuel tanks and space can only be obtained by taking over existing spaces, either within the ship or on deck.

Such conversions not only reduce revenue-earning possibilities, but can also be time-consuming and cause a further short-term loss of revenue by removing the ship from service for lengthy periods.

An alternative is to install a newly prefabricated mid-body section that contains all the necessary LNG systems along with additional cabins and public spaces. A lengthening can be performed in a few weeks and the ship does not have to spend long periods in the shipyard, while passenger capacity can also be increased at the same time. It is estimated that the required investment for such an LNG conversion could limit the cost to say between 10% and 15% of newbuilding cost.