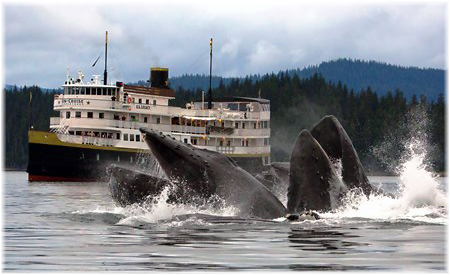 Scenic river cruising on the Pacific Northwest’s Columbia and Snake Rivers begins in April aboard Un-Cruise Adventures’ 88-guest S.S. Legacy. An updated itinerary highlighting the area’s history and additional wine cruises have been added for 2016.

Seattle-based small ship cruise line Un-Cruise Adventures increased its number of wine cruise departures to seven in 2016. The Ameritage! Four Rivers of Wine & History cruise includes a wine expert on board and visits Oregon and Washington wineries for tastings and tours. A Legacy of Discovery itinerary focusing on the area’s rich history is refreshed for the season with a stop in Richland for a tour to Hanford Reach and Terra Blanca winery.

A travel credit savings of $300/couple is offered for bookings made by March 1, 2016 with mention of the offer code: RT3UW36. The savings is applicable for river cruises departing April – November 2016.

“I believe the Columbia and Snake Rivers offer the most scenic river cruise in the Americas, with mountain peaks and steep cliffs along the route,” said Captain Dan Blanchard, CEO. “We had great success with our wine cruises last year so we’ll offer three more departures in 2016.”

The S.S. Legacy sails roundtrip Portland, Oregon on 34 departures from April through November. The scenic river cruise travels through a varied landscape from lush forests of the west, through the scenic Columbia River Gorge, to the rolling hills of the Palouse, desert-like landscapes of the east, and back to the coast, while passing through eight sets of locks and dams.

Legacy of Discovery
History comes alive on the mighty Columbia and Snake Rivers through included tours, lively presentations by on board heritage guides and local experts along the route. New in 2016 is a tour to Hanford Reach Interpretive Center with exhibits on the Manhattan Project, and the history and ecology of the area. Afterwards, guests enjoy a private tour, lunch and tasting at award-winning Terra Blanca Winery & Estates Vineyard. Highlights include visits to Multnomah Falls, jet boat ride into Hells Canyon, Fort Clatsop, Maryhill Museum, Columbia Gorge Interpretive Center, Bonneville Dam Visitor Center and  Astoria’s Columbia River Maritime Museum. Rates begin at $3,395 per person, double occupancy.

Special theme departures include Lewis & Clark, smooth jazz, entertainment/music, alumni and a chairman’s cruise. Inclusive cruises offer a comprehensive historical perspective on board and ashore with guided tours in each port combined with innovative meals; premium wine, beer and spirits; all taxes and fees and transfers. Charters and group incentives are available.