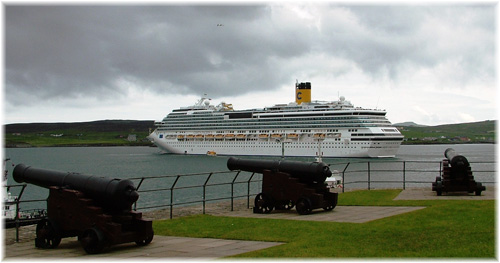 The first cruise ship arrival of the year will enter Lerwick Harbour this weekend at the start of a record-breaking season which is expected to see the most passengers and vessels yet at the Shetland port, along with the highest gross tonnage of cruise ships, including the biggest vessels to date.

Current records are set to be smashed over the next six months:

Victor Sandison, the Port Authority’s Senior Commercial Executive, said: “The prospect of a complete set of new port records makes it a particularly exciting season, highlighting Lerwick’s contribution to the growing Scottish cruise industry and to the Shetland economy.”

First in, on Sunday 24 April, will be the Cruise & Maritime Voyages (CMV) operated Astoria en route from Portree, Isle of Skye, to Torshavn, Faroe, on a Scottish Islands and Faroe cruise. The CMV operated Marco Polo will make the last call of the season on 6 October, heading from Dublin to Kollafjordur, Faroe, on an Iceland and Northern Lights cruise. June and July will be the busiest months, with 18 and 23 calls due respectively.

Ten maiden calls will include Celebrity Silhouette and Viking Ocean Cruises which is visiting Scotland for the first time, with Viking Sea and Viking Star.

The Port Authority is continuing to support the popular Meet & Greet programme which welcomes and assists arriving passengers and crew. An arrangement with Hjaltibonhoga, the Shetland Fiddlers of the Royal Edinburgh Military Tattoo, who helped coordinate fiddlers to play for visitors at quayside in 2015, is being repeated.

Sandison added: “The completion of the new Holmsgarth North Jetty this autumn will provide further berthing facilities for cruise ships from 2017 onwards. The outlook is very positive for next season, with 54 ships already booked – promising record tonnage and over 52,000 passengers – with more to come. This early, there are also 13 bookings for 2018.”