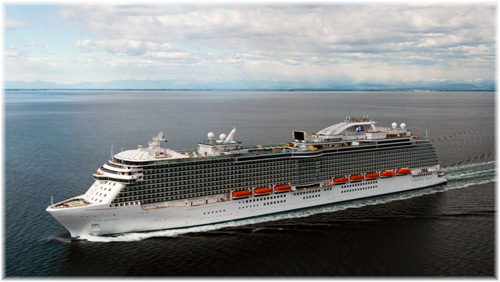 Princess Cruises guests aboard Regal Princess sailing to Scandinavia and Russia this summer now have the opportunity to fully immerse themselves in the destinations with an impressive line-up of speakers who will come aboard overnight to share their personal stories, local expertise and passion for the places they call home.

This unique speaker series, developed in partnership with Cruise Baltic, is part of the new industry-first “Local Connections” program, aimed to inspire the cruise line’s guests by sharing the pride the company’s port partners have for their destination, while taking full advantage of the suggestions and creativity of those partners who know the destination best.

“As part of our new ‘Local Connections’ program, we developed an impressive speaker series we are certain our guests will enjoy in partnership with Cruise Baltic,” said Bruce Krumrine, vice president, global shore excursions, Princess Cruises.
“From a local journalist, ballerina, chef, musician and historian, these are just some of the vibrant personalities who will bring the memorable destinations of the Baltic to life for our guests.”

More than 70 speakers will join Regal Princess during the summer 2016 Baltic cruise season. Highlights include:

• Pia Allerslev, Mayor – Copenhagen, Denmark
Allerslev is the Mayor of the Children and Youth Administration in the City of Copenhagen and a member of the Copenhagen City Council for the Danish Liberal Party. She began her political career in 1991, where she was elected Chair of the Liberal Youth Party in her former hometown. Prior to becoming Mayor of Children and Youth, Allerslev was Mayor of Culture and Leisure for six years. Earlier she worked as a teacher gaining valuable insights into the public sector by working in the public school system. Now she is shaping the conditions herself as a politician and a Mayor.

• Maris Hellrand, Estonia Stories -Tallinn, Estonia
Hellrand is a multilingual freelance journalist and consultant who tells engaging and enriching stories about Estonia to international audiences. She is passionate about travel, music, design, architecture, cinema, international affairs, innovation, start-ups, and education. After nearly two decades as a global nomad, Estonia has become the professional focus (and a private paradise) for her. Her countless stories about Estonia have reached TV, radio and magazine audiences in Germany, France, United Kingdom, and Scandinavia.

• Evgenia Brileva, Ballerina – St. Petersburg, Russia
Brileva was born into an artistic family as the daughter of a ballet dancer and a musician. As a backstage child, she was naturally devoted to acting, dancing and piano playing. At the age of 10 she toured to Germany with her father performing pieces by Rachmaninov, Tchaikovsky and Prokofiev. She learned photography from her grandfather, a press photographer of famous Pravda Newspaper. Brileva’s background is a blend of Russian culture that includes ballet, music, fine art & photography, which has been all the more enriched and inspired by the beauty of her mother city.

• Ingreid Rudefors, Director – Stockholm, Sweden
Rudefors is a Swedish director, writer and film producer. She spent the first part of her professional life in New York, where she traveled after high school to study theater. In the late 1980’s, she was active in the New York independent film industry. She currently works as film commissioner in Film Region Stockholm Malardalen.

• Sonya Antoni, Historian – Waremunde, Germany
Sonya hails from an international surrounding and upbringing: born with a British mother and a German father, she grew up in Iran and South Africa, returning to her father’s country to study English and French Literature and Linguistics as well as Psychology in Germany, England and France. Her choice of the University of Potsdam set her path for tourism as the World Heritage Sites of Sanssouci Parks and Palaces were a haven for the art lover. Participating in the new tourism programme of the Potsdam City Council and of the Foundation Prussian Parks & Palaces she soon became inseparable from the city’s history combining it with contemporary politics from the German capital a stone’s throw away.

“We’re proud to showcase some of the beautiful destinations of Northern Europe that we call home to Princess Cruises guests,” said Claus Bødker, director, Cruise Baltic. “The dynamic line up of speakers we’ve secured together, will offer guests authentic and passionate personal stories, as well as an unforgettable glimpse into our local culture, history and way of life.”

Additional elements of the “Local Connections” program include a video series of local port partners sharing their insights, experiences and recommendations of the places they call home, new and exclusive shore excursions, new port welcome and departure experiences, and an insider’s guide including “cool things” made in each port.