“The World’s Most Luxurious Cruise Ship” – Other Cruise News: Ponant’s Sea Voyages – Trouble On The Amazon

This week, we look at Regent Seven Seas Cruises’ new Seven Seas Explorer, said by Regent to be the most luxurious ship ever built. We assess the first reactions and compare her to Hapag-Lloyd Cruises’ Europa 2. Elsewhere, Marseilles-based Ponant is launching a number of sea voyages, mostly non-stop port-to-port ocean voyages such as Vancouver to Honolulu and Boston to Portland. And trouble erupts on the upper Amazon River in Peru, where one river cruiser was attacked by bandits last week and another sank at her dock in Iquitos, with four crew members missing after an explosion on Saturday.

“The World’s Most Luxurious Cruise Ship”

When Regent Seven Seas Cruises announced that it would be building in the 750-berth Seven Seas Explorer the world’s most luxurious cruise ship they no doubt had Google in mind, but this type of public relations approach is very self-serving. Having that goal is fine but the style has the ring about it of a now-defunct cruise line that once promoted itself ass offering Seven-Star service. 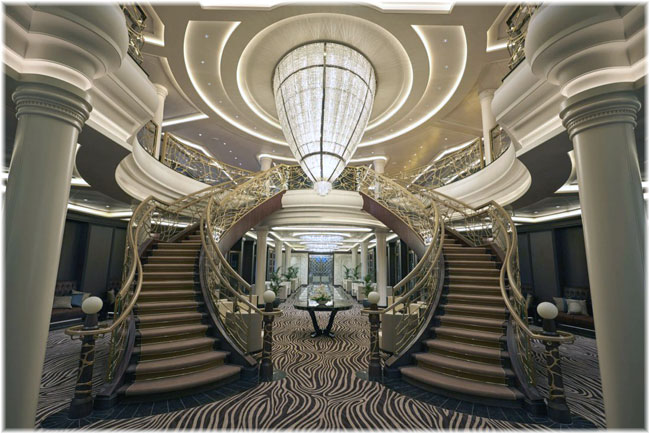 This kind of publicity attracts comparison of course so it will be interesting to see how the Berlitz Guide to Cruising rates this new ship, especially as Regent ships have not been rated amongst the very best in this guide in the past.

For now, though, we can make our own comparisons with the ship Berlitz presently rates the best in the world, Hapag-Lloyd Cruises’ 516-berth Europa 2:

If the size of the top suite is your measure then the Seven Seas Explorer has that hands down. If you’re willing to foot the $5,000 cost per person per day, the new ship’s Regent Suite comes with private car and driver at each port and chauffeur-driven limousine to and from airports. 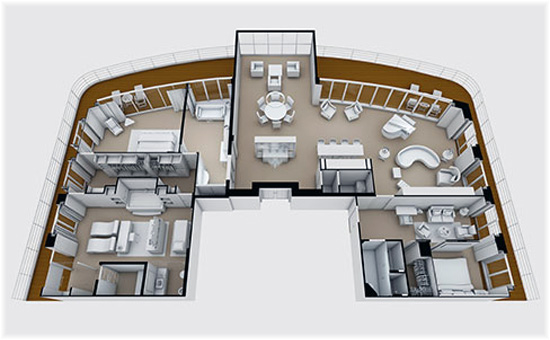 Compared to $3,000 per person per day on Europa 2, with no limousine, the Regent buy seems to be a good one.

But the new Fincantieri-built ship is not quite as spacious overall as the St Nazaire-built Europa 2, which provides about 12.5% more space per passenger. And judging by the initial reports of two of the UK’s national newspapers, the service on the Seven Seas Explorer has not yet reached the level that might be expected, especially with long waits in the restaurant.

Fran Golden covered the new ship for Bloomberg under the heading “Regent Seven Seas’ New Luxury Ship Is ‘A Trophy to the One-Percenters.'”

And here is how she reported:

“On board the opulent new Seven Seas Explorer this week, Frank Del Rio, president and chief executive officer of Norwegian Cruise Line Holdings, took a moment to talk about the subject of conspicuous consumption. ‘This idea that one-percenters are the evil empire of the world is over,’ Del Rio said. ‘It’s time to celebrate success. It’s time to celebrate wealth. This ship is a trophy to the one-percenters.'”

Just who these two ships are aimed at is an interesting comparison in itself. If one is to follow Frank del Rio’s expression, then Regent is after the members of the wealthiest one percent of the population. But what makes Del Rio’s statement even more controversial is the fact that the expression is sometimes taken to represent those who seek honour far greater than their perceived contribution would warrant. 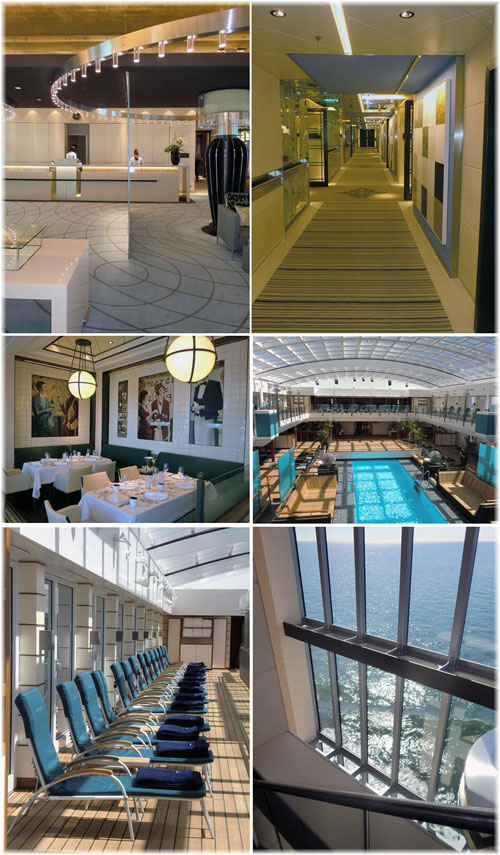 Jane Archer describes Europa 2 on The Daily Telegraph website: “The décor is modern and minimalist (out goes marble, except for a little in the Italian restaurant, and in comes limestone), the overall look is light and bright (“we have opened the windows and let the air in”, I was told) and all cabins are suites with large balconies in recognition that today’s luxury cruisers want their own space.”

Perhaps the comparison is in the marble. Regent Seven Seas’ description of the Seven Seas Explorer says: “There are 158 crystal chandeliers throughout her various restaurants, lounges and other public spaces, as well as 97 crystal chandeliers inside the larger suites and another 218 in the corridors. Some 45,876 square feet of marble can be found throughout the ship, more than half of it Carrera marble from Italy, used in all public spaces and suites.”

Princess Charlotte of Monaco christened the Seven Seas Explorer in Monaco on July 13. The first revenue sailing, a 14-night Monte Carlo-to-Venice cruise, departs July 20. After her maiden voyage, Seven Seas Explorer will sail ten Mediterranean itineraries before moving to North America on a 16-night North Atlantic voyage from Rome to Miami on November 16.

From Miami, the ship will begin a series of Caribbean cruises before departing on a 16-night Panama Canal Crossing from Miami to Los Angeles on December 28.

In order to reposition members of its fleet when needed elsewhere, Ponant has decided to begin offering pure point-to-point sea voyages from time to time. 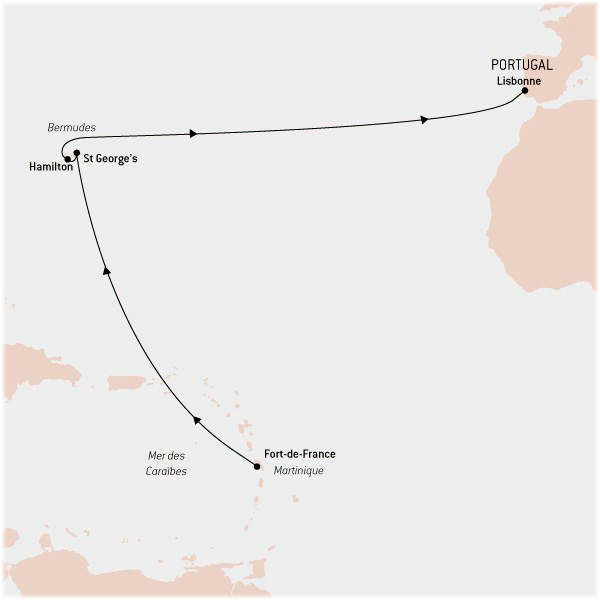 Twin occupancy fare for the Vancouver to Honolulu sailing is €2,739 per person (€3,226 single) including return flights from Paris to Vancouver and from Honolulu to Paris. The Boston to Panama sailing in Le Boréal, meanwhile, can be booked for €1,250 per person cruise-only.

Several other opportunities will be made available in the coming months as follows:

Each of the Ponant ships takes up to 264 passengers but on these voyages numbers will be limited. Le Ponant, the fleet mascot, carries just 60 passengers.

Trouble On The Amazon

Aqua Expeditions suffered the loss of their 24-berth all-suite river cruiser Aqua Amazon on Saturday, with founder and ceo Francesco Galli Zugaro breaking the news on the same day. 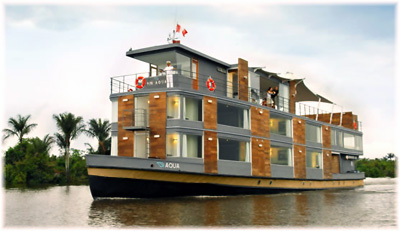 During the regular Saturday turn-around, he said, “an accident occurred that caused an explosion and resulted in the sinking of the ship. The investigation is ongoing and more information will be shared as it becomes available. No passengers were on board but some of the crew have been hurt and up to four are declared missing.”

Passengers scheduled to depart Saturday on the Aqua Amazon were reassigned to the Aria Amazon, which also departs from Iquitos, as well as on other vessels.

Just last month, Aqua Expeditions ordered a 40-berth replacement for this vessel, also to be called Aqua Amazon. For delivery in December 2017, the plan was to place the present Aqua Amazon into the wholesale charter market under the new name Aqualina.

Meanwhile, in a report on Thursday, July 14, Peruvian authorities said bandits had attacked Delfin Amazon Cruises’ 44-berth Amazon Discovery and robbed more than two dozen tourists from the US, Australia, New Zealand and Canada. The attackers used a small boat to reach the Amazon Discovery, boarded it and then robbed passengers and crew of goods worth about $20,000 early Thursday. 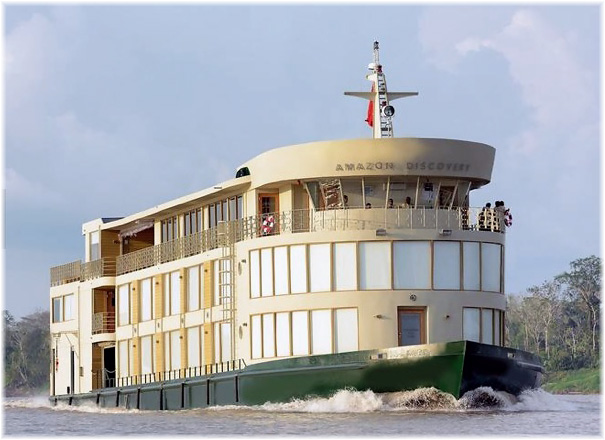 The tourists included twenty-one Americans, six Australians and two New Zealanders. There were also 25 Peruvians working aboard. The cruise was halted eight days into an 11-day cruise and land tour and the tourists flown home from Lima, where they had started. The cruise was on charter to Avalon Waterways.

The last assault of this kind occurred in October 2014 on the passenger vessel Golfinho as it traveled the same route between Tabatinga, Brazil, and Iquitos. A police officer happened to be on the boat and tried to ward off the attack. But the officer and one assailant were killed and seven passengers wounded in the event.

The only time this had happened before that was in August 2009, when the Aqua Amazon was attacked by bandits twice within just nine days by bandits armed with guns and grenades. Two police were stationed on the ship after the first raid but they were overpowered during the second attack by nine armed bandits. The raiders then reportedly bound the hands and feet of twenty tourists, including some Britons, before fleeing amid a shoot-out with police reinforcements.

At the time, to ensure security, coast guard and national police boats were assigned to escort every vessel in the area, and officers will also be stationed on board. A mobile patrol station was also set up halfway through the itinerary.