Following the 2017 Word Cruise planned by its 1,250-berth Magellan this winter, CMV will upgrade its World Cruise ship in 2018 to the 1,550-berth Columbus, which it is acquiring from P&O Cruises Australia. Meanwhile, in Russia, plans are unveiled for a new 310-berth Sea and River class cruise ship.

Cruise & Maritime Voyages has announced that its Columbus will leave Tilbury on her first CMV world cruise on Thursday, January 5, 2018.

This vessel was launched as Sitmar Cruises’ Fair Majesty in 1988 before becoming Princess Cruises’ Star Princess in 1989 and P&O Cruises’ UK-based Arcadia (II) in 1997-98.

Before heading for the P&O Australia fleet as Pacific Pearl in 2010 she traded in the Mediterrean as the Ocean Village. As P&O’s Arcadia, this ship had served as a replacement for the longstanding P&O flagship Canberra.

Announcing the new programme, Lisa Jacobs, head of trade sales at CMV said: “People dream that when they win the lottery they will take a World Cruise. Now they can without that windfall – CMV has made the wish possible with our buy one get one half price deal.”

The Columbus’s departure marks to the day the 20th Anniversary of this ship’s inaugural world cruise as P&O’s Arcadia in 1998.
Jacobs said: “Built for deep sea ocean cruising, we believe that Columbus is the ideal ship for this epic circumnavigation of the globe. Her expansive lounge and deck areas offer the perfect surroundings to escape the winter in style and comfort.” 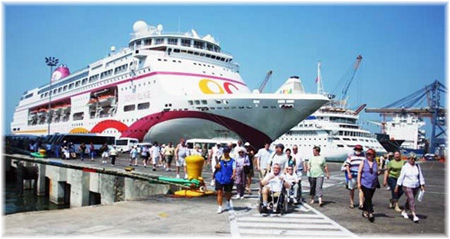 There are free twin cabin upgrades for early bookers. This fare is based on two people sharing a twin cabin and includes delicious full board cuisine, afternoon tea and late night snacks, Captain’s cocktail parties, deck parties, self service tea and coffee between 6 am and midnight, big show entertainment, cabarets and classical interludes, daytime activities and leisure facilities, Guest speakers and arts & crafts, porterage of luggage port to cabin and port taxes.

A total of 150 cabins are also available on board Columbus for solo travellers, with a 25% single supplement on the equivalent category for twin share prices.

Recently at the Lotus shipyard in Astrakhan, part of United Shipbuilding Company (ASC) the keel was laid for the first Russian passenger cruise ship in many decades. 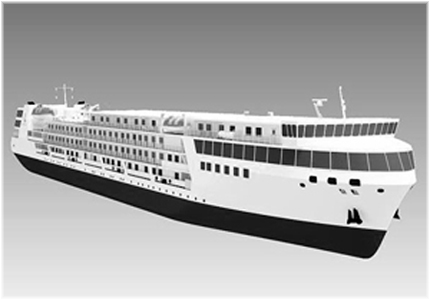 Artist impression of the new class of Russian river boats

Support for this new class of even vessel is coming from Russian Federation president Vladimir Putin, who expressed the hope that this will be the first but not the last of a series of such ships.

“I have no doubt that this series will be in demand… in this case passenger carriers… and will serve as a real revival of passenger transportation along the rivers and development of domestic and inbound tourism”, said Putin. 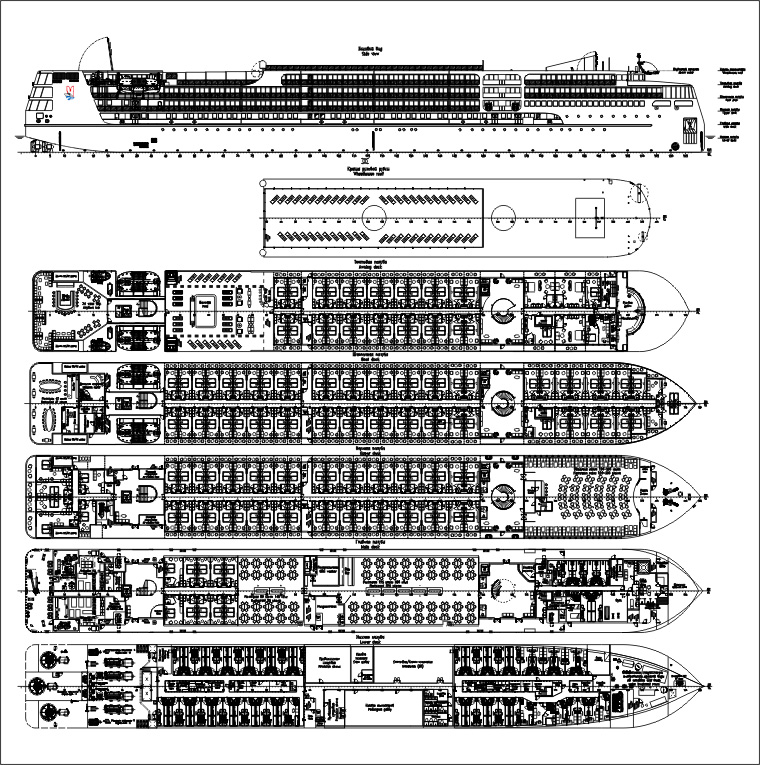 Plans of the new class of Russian river boats

However, they were not entirely foreign as they were built to Soviet order and developed specifically for operation by Russia in Russian conditions. These vessels were were mainly built in East Germany, Czechoslovakia, and Austria.

After 1990, Russia river cruise ships were no longer built and the business was carried on for many years utilising old tonnage. The same happened with the old Russian passenger fleet after they were banned in North America after Russia invaded Afghanistan.

Shipping conditions in Russia are now different. The new ships will be “river-sea” ships. This class of vessel is needed in order to be navigate large lakes. Russian river cruise ships are also much more powerful than typical Rhine and Danube vessels. Dimensions for the 310-passenger ships will be 463 x 55 feet.

The PV300VD concept was developed in 2010-2015 by order of the Russian Federal Marine Agency for river transport. The state customer and coordinator of the program is the Minister of Industry and Trade, and completion scheduled is for 2019. The cost of a ship varies according to estimates between 2.5 to 3.5 billion rubles and the payback period is 5 to 20 years. Three such vessels are foreseen at the stage, although more could follow. 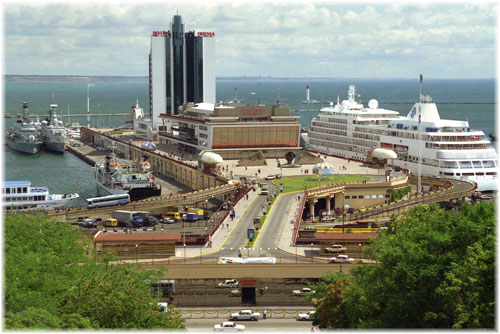 The routes foreseen for these vessels are in season (May to October) between Moscow and St Petersburg, then taking tourists from Moscow to Samara and Rostov-on-Don, and in the winter embarking in the Eastern Med and possibly the Red Sea: for example, Rostov-on-Don – Yalta – Odessa – Istanbul – Alexandria.
There is also talk about navigation in the Crimea, in Sevastopol, and also in Sochi, on more interesting tourist routes on the Caspian sea.

The new ships could carry about 450-500,000 passengers annually, of which about 100,000 would be foreign tourists. The number of foreigners declined by almost half in 2014 as western tour operators cut their Russian programmes and westerners stayed away.

Buyers of the new ship would be operators such as Mosturflot (the GK Sea and River shipping company), Vodohod and Orthodox, said the Ministry of Industry and trade. Given the high cost of these ships, it is planned to lease them to the operators.

The main difference of this four-deck ship is that it will be able to navigate seas as well as rivers, whereas now there are only river boats. The vessels will also be much more luxurious than past ships and will include such western amenities as French balconies and large suites.