Last week came news that from Royal Caribbean that it would be introducing a new class of mega 200,000-ron cruise ship to carry 5,000 passengers. But this class will be different because it will be dual-fueled, relying mainly on LNG for its main proplulsion units by Caterpillar MaK. The first to ships are to be delieverd in 2022 and 2024. Meanwhile, the Netherlands-based shipbuilder Damen has released details of a new expedition cruise ship design that joins three or four others that are also now on the market. And from Italy come rumours of a new multi-ship order for Fincentieri from Norwegian Cruise Line.

Royal Caribbean Cruises has ordered two new 5,000-berth ships that will be powered by liquefied natural gas (LNG). These ships are expected to run primarily on LNG but will also be able to run on distillate fuel, to accommodate occasional itineraries that call on ports without LNG infrastructure.

The ships will be operated by Royal Caribbean International. The company said it  signed a memorandum of understanding with shipbuilder Meyer Turku for the new class of vessel under the project name “Icon”, to be delivered in the second quarters of 2022 and 2024.

The company will also be introducing fuel cell technology on board, which it will be testing on an existing “Oasis” class ship in 2017, and will run progressively larger fuel cell projects on new “Quantum” class vessels being built in the next several years.

Jan Meyer, ceo of Meyer Werft and the Turku yard, was quoted as saying “Our partnership with RCL has created a number of groundbreaking ship classes, such as Oasis, Celebrity Solstice, Quantum, and Mein Schiff, and we are grateful that Royal Caribbean is again giving us the opportunity to partner with them on a new class of ships.”

Damen Shipyards Group has revealed its design for an expedition cruise ship. The design also draws on the skills and expertise of Expedition Voyage Consultants Ltd and the Danish Naval Architect firm Knud E Hansen. 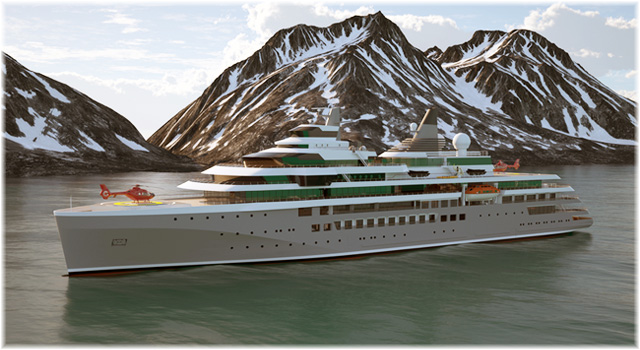 The ship has been designed for expedition operations in both remote polar and tropical regions. The vessel’s Polar Class 6 compliance and 30 days autonomous cruising capability ensure she is globally capable and able to tackle challenging, far-reaching itineraries. And vessel’s design complies with SOLAS Safe Return to Port requirements.

Passengers will have views from multiple viewing platforms extending over the side of the ship or past the bow, providing the most spectacular vantage points of any expedition ship.
A specially developed crow’s nest will also aide visibility during ice navigation as well as giving passengers a panoramic view over the surrounding landscape.

The design can accommodate 115 passengers, although it can be scaled up to 200 passengers or more. Damen has selected a diesel-mechanical hybrid configuration for propulsion with medium speed engines. The service speed is 16 knots.

Affaritaliani.it, an online Italian newspaper based in Milan, has reported that an order will be placed for six megaships, with deliveries of the 130,000-ton vessels to start in 2022.

Norwegian has built its current class of ships at Meyer Werft, and previously, the Epic at STX France. But, a new management team in place since early 2015 and led by Frank del Rio has extensive experience building ships at Fincantieri for the newly affiliated Regent and Oceania brands.

Yet another recent report has Norwegian placing into service a 4,000-berth ship on the Seattle-Alaska run in 2018. This ship will be the largest in the trade, the largest at present being 3,000-berth units.