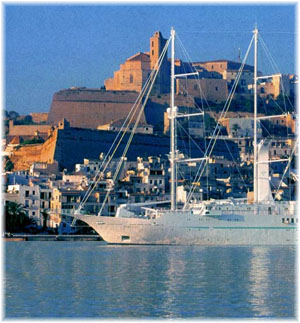 From Palma, a tour of the city of Palma can take 1/2 or whole day. From Alcudia, take an excursion to Palma (only 45 minutes by bus) or Alcudia’s churches and sanctuaries route and the Roman City of Pollentia. From Mahon, take a trip to ‘Talayotic Menorca’, where there are more than 1,500 archaeological sites in 70sq mtr. Visitors will have the opportunity to visit these sites with a tour guide. This tour includes a cheese tasting.

From Ibiza, for overnight ships, sail to Formentera, the smallest of the Balearic Islands. A turquoise island of beaches of fine sand, with beach clubs for sunbathing, routes for trekking or cycling and lighthouses. For short calls, Ibiza’s rich heritage has earned the recognition of Heritage of Humanity by UNESCO in 1999. This rich heritage is represented by Dalt Vila, the old city that crowns the port and whose streets invite the traveller to wander slowly.