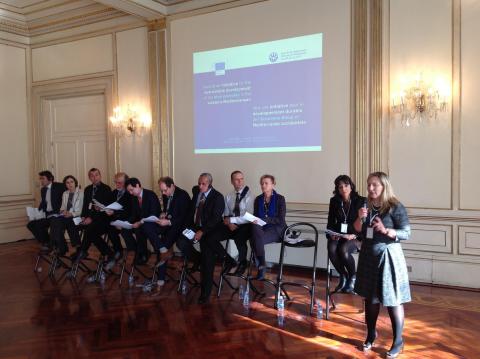 Τhe sustainable development of the Blue Economy in the Western Mediterranean, was the theme of the Stakeholders Conference held in 2 February 2017, Barcelona, Spain.

MedCruise was present, with the Association of cruise ports in the Med and its adjoining seas represented by Mrs Valeria Mangiarotti, assigned member for environmental issues, Port of Cagliari.

Mrs Mangiarotti was among the esteemed panelists during the inaugural panel that discussed: The sustainable consumption and production of maritime sectors in the Western Mediterranean. Maritime and land-based activities, along with the progressively more urbanised coastline, are at the origin of a wide spectrum of pressures affecting marine and coastal ecosystems. These range from high resource consumption (water, energy, food products, raw materials, coastal space) to air and water pollution releases and waste generation but also climate change effects on biodiversity and marine resources.

The panel discussed the opportunities offered by Sustainable Consumption and Production (SCP) in the Western Mediterranean region, existing barriers and ways of overcoming them, the promotion of more effective SCP tools and projects, and stakeholders cooperation to mainstream SCP into Blue Economy sectors and act to prevent marine pollution.

Mrs Mangariotti addressed among others the theme of waste reception facilities in the Med ports, emphasising the work that is done as regards the effective handling, notification, delivery, inspections and fee regimes, especially at the smaller in pax movements and cruise calls ports in the Med.

MedCruise re-confirmed its commitment to continue its work aiming to secure a sustainable and responsible growth of cruise activities in the Med and beyond.