Last week came confirmation that MSC Cruises had ordered two new “World” class cruise ships, among the largest in the world, with an option for two more, from STX France. This news is not shocking, seeing that there will soon be 120 cruise ships in the world measuring over 100,000 gross tons, and this order will bring the number of about eight 200,000-ton ships, including five operated by Royal Caribbean International and one by Star Cruises. While vessels grow in size, we also have a look at rising (and in some cases falling) markets in the cruise industry. And finally we note that Southampton last week received a record fifteen cruise ships in three days.

At the christening of its new 171,598-ton 4,488-berth MSC Meravigilia by Sophia Loren in Le Havre last week, MSC Cruises announced the next step in its expansion plans. 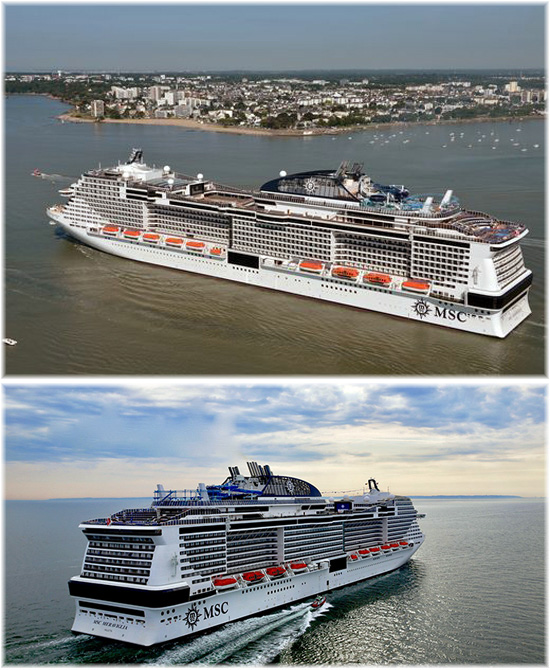 The line has now finalised an order for two 200,000-ton LNG-powered cruise ships to be built by STX France in St Nazaire and delivered in 2022 and 2024.
The agreement includes an option for two more vessels, for delivery in 2025 and 2026. These ships will create a new “World” class series for MSC.

Each ship will be 1,083 feet long and will have 5,520 lower berths. Their maximum passenger load will be 6,850, the highest in the world. They will also have a Y-shaped superstructure to allow for panoramic views and to increase the number of balcony cabins.

The new ships’ perpendicular G-bow follows many such ships ordered recently in that it has been designed to improve stability and hydrodynamics as well as passenger comfort.

Laurent Castaing, STX France ceo, was quoted as saying, “once again, MSC Cruises has chosen to put its trust in our capacity to support its growth and expansion as well as in our ability to conceive, develop and build the world’s most modern and technologically-advanced cruise ships. By adding the new ‘World’ class to the four previous ship classes that we have delivered over the past fifteen years, the number of vessels in its fleet built by STX France in St Nazaire is set to reach twenty.”

MSC Bellissima, launching in 2019, will be 49 feet longer than MSC Meraviglia and will have a museum with art pieces on loan from some of Europe’s leading galleries.

As part of MSC’s return to the UK, the MSC Meraviglia will also visit the UK on two voyages next year. Other MSC ships, including the 3,502-berth MSC Preziosa in 2017 and the 2,550-berth MSC Magnifica in 2018, will also be offering cruises from Southampton.

MSC Cruises now has orders and options for another ten ships by 2026.

Perhaps most curious, however, was economically-progressive Canada, where the number of cruisers has dropped from 775,000 in 2013 to 750,000 in 2016. It might be remembered that in one year recently more Australians cruised from the Port of Montreal than Canadians. Something must be wrong. 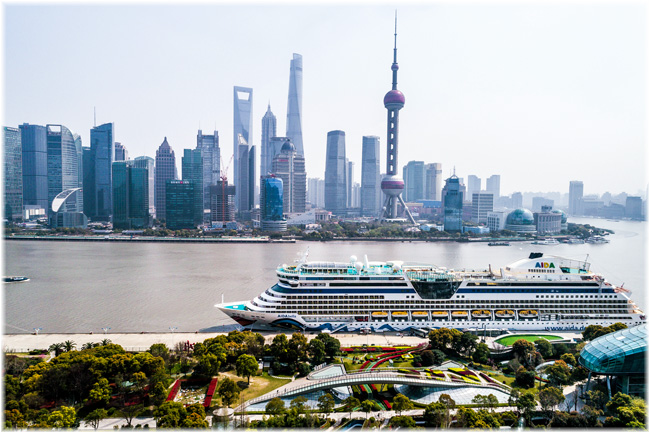 Early on the morning of April 2, 2017, AIDAbella was the first ship of the AIDA fleet to sail past Shanghai’s famous skyline

Meanwhile, in the world as a whole, some 24.7 million people took a cruise last year out of a world population of about 7.43 billion. This means that for every million people on Earth, 3,300 took a cruise in 2016, an overall penetration of about 0.3%. This of course means that China is still behind the global average when all countries are included and will not exceed the global average until it hits about 3.2 million cruisers.

What is not measured in these figures, however, is revenues. The Chinese market at 2.1 million cruisers could be worth far less than the Australian market of 1.2 million, with the Australians taking much longer cruises and paying much more for them.

The prospects of growth are nevertheless more serious in China, which is why all the majors are building new ships for China while they can’t build any large new ships for Australia until the powers that be improve the cruising infrastructure of that country.

We did not record it at the time but on the weekend of June 2-4, the Port of Southampton handled a record fifteen cruise ships in three days. Port operators Associated British Ports estimated that around 60,000 passengers embarked or disembarked over the weekend. 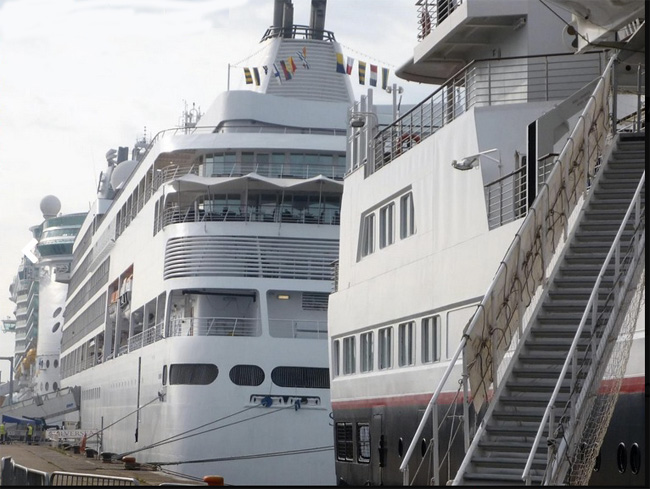 The Seven Seas Explorer was on her maiden call to Southampton and set sail on June 3 from Southampton for a 10-night Round Britain cruise, to take in eleven ports including Newcastle (June 5), Edinburgh (June 6), Belfast (June 7), Holyhead (June 9), Dublin (June 10), Liverpool (June 11), Cork (June 12) and Dartmouth (June 13), arriving back into Southampton on June 14.

The Queen Victoria, on the other hand, was making her first call at Southampton since having an additional 43 balcony cabins added in a £34 million refurbishment at Fincantieri Palermo. This increased her lower berth capacity from 2,014 to 2,100 passengers.

Essentially the superstructure has been extended to the stern as was done with the new 2,101-berth Queen Elizabeth when built.