Last week, we received word from Victory Cruise Lines of Miami that it had received approval to cruise to Cuba and that president and ceo Bruce Nierenberg is now in Cuba making arrangements. Victory operate the 210-berth Victory 1, which is presently sailing the Great Lakes. Victory’s Nierenberg advises us of the relatively new line’s plans for Cuba. Elsewhere, Ritz-Carlton has announced that it will enter the yacht cruise business with three new 298-berth cruising yachts of 623 feet each. Meanwhile, Chile’s Antarctica XXI has announced a 70-berth 298-foot newbuilding for its Antarctic fly and sail business.

A century ago, Cuba was a popular destination for cruises leaving from America. It was served regularly by Munson Lines and the Ward Line from New York, by the Peninsular & Occidental Steamship Company from Tampa and by Southern Pacific Steamships from New Orleans. 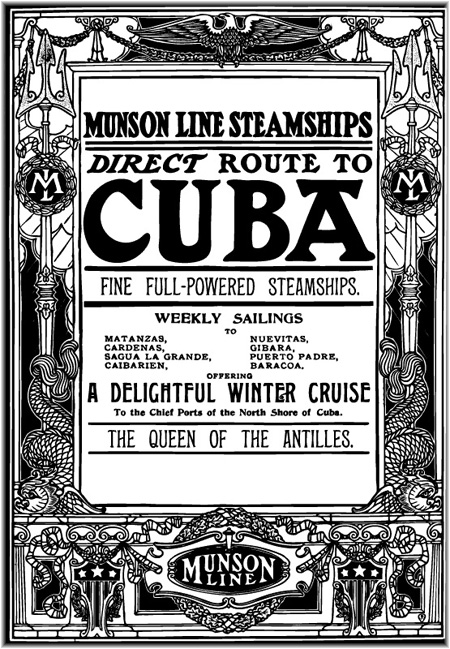 Cuba was was served regularly by Munson Lines from New York

In those days, Miami had not yet developed as a cruise port.

As well as Havana and Santiago de Cuba, many outlying ports were also served, including Matanzas, Cardena, Nuevitas and Baracoa, among others.

A century later, following an earlier approval granted to Connecticut-based Pearl Seas Cruises for their 210-berth Pearl Mist, Miami-based Victory Cruise Lines has now been approved to do business in Cuba and has now been invited to contract for berths in Cuban ports. 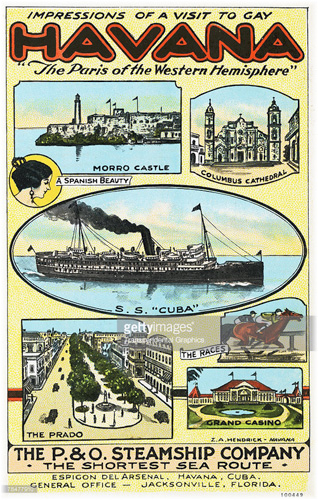 Victory president and ceo Bruce Nierenberg advised The Cruise Examiner that, “being a small ship company we will be seeking most of our berths in the smaller less visited ports as we can fit into all the ports in Cuba that would be able to host a cruise product.

“We expect, In addition to Havana, to be calling on Cienfuegos, Trinidad, Santiago de Cuba, Maria La Gorda. We will try to arrange overnight stops in at least three ports to provide more of an immersive experience. We will work closely with the Cuban authorities to come up with the best combination of ports and cruise lengths that our client demographic looks for.

The 210-berth Saint Laurent. In this pic she is moored in Montreal – Currently Victory 1

“As soon as I get the berths and complete the itineraries in the coming days we will let you know the final itineraries along with the product details we have been waiting to use for some time now.”

Victory had hoped to get started in 2016 but approval was not forthcoming as quickly as had been expected.

Concerning some of the uncertainties raised by recent tightening of American rules, Nierenberg said, “we are all inclusive so we have total control over the tours ashore, their content, the way they are managed, the personal involvement of our tour leaders and all related issues of participation. The fact that the tours are included in the price of the trip in every port will ensure that our guests can comply with the US regulations.”

He added, “when you think about it, small ship all-inclusive cruising like ours is the best fit for the new US regulations and also brings the economic benefit not just to Havana, as do the large cruise ships, but to all the five corners of the country.”

“We intend to have tours available for people traveling without a pre-arranged fixed group that will be led by our own certified staff and feature only parts we know to be compliant with the regulations.”

Most of the US-origin cruises so far authorized for Cuba have been short 4- and 5-night sailings with an overnight in Havana. But Nierenberg told us, “this will be especially true on a 14-day cruise where we can have overnights in all the major ports and really give them a good taste of life in not only Havana but Cienfuegos, Trinidad, and Santiago de Cuba.”

Initial itineraries from Victory Cruise Lines will offer one-way 10-night cruises that begin in Havana and run to Maria La Gorda, Cienfugos, Trinidad and Santiago de Cuba and vice versa. In each case, overnight stays will be offered in Havana, Cienfuegos and Santiago. An 11-night version of these same itinerariies will run between Miami and Santiago and final itineraries are being worked on for a Winter 2018 startup.

Victory operates in the Great Lakes in the summertime and its first ship, Victory 1, is today en route from Mackinac Island to Chicago. This vessel first traded in the lakes in 2001 as Delta Queen’s Cape May Light and in 2015 as Haimark Line’s Saint Laurent.

The Ritz-Carlton Hotel Company, which operates 94 luxury hotels, last week announced that is entering the cruise industry with a small ship operation catering to the luxury market. Ritz-Carlton is part of Marriott International.

The Ritz-Carlton Yacht Collection will open for the 2019 cruise season with the first of three 298-berth yacht cruisers, with two additional ships expected in 2021 and 2022.

“The Ritz-Carlton Yacht Collection will have a distinctive personality and the vessels are sure to be true stand outs in some of the most glamorous ports around the world,” said Herve Humler, President and Chief Operating Officer of The Ritz-Carlton Hotel Company. “This unique combination of yachting and cruising will usher in a new way of luxury travel for guests seeking to discover the world in a relaxed, casually elegant and comfortable atmosphere with the highest level of personalized service.”

Itineraries are being developed with an intent to combine the lifestyle of The Ritz-Carlton’s luxury resorts and the casual freedom of a yachting vacation. Calling at intimate and signature destinations alike, voyages will range from seven to ten days. The first ship will cruise a wide variety of destinations depending on the season, including the Mediterranean, Northern Europe, the Caribbean and Latin America.

The ships will measure 623 feet in length and accommodate up to 298 passengers in 149 suites, each with its own private balcony. The yachts will also feature two 1,485 sq ft duplex penthouse suites jointly designed by Ritz-Carlton and leading cruise ship design firm Tillberg Design of Sweden.

“Ritz-Carlton is known for its legendary service and high standards,” said Douglas Prothero. “We are delighted to collaborate with Ritz-Carlton as our hospitality operator in offering the most exclusive yachting experience to be found at sea”, added Lars Clasen, both of The Ritz-Carlton Yacht Collection. 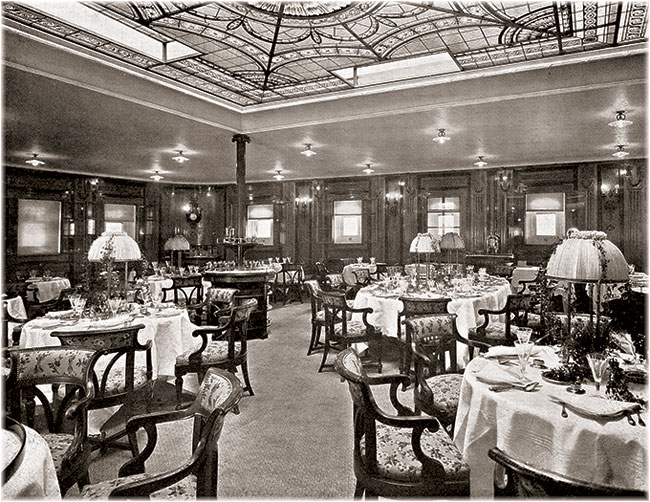 Ritz-Carlton first went to sea in 1905, in Hapag’s Amerika, which had its own extra tariff Ritz-Carlton restaurant

The Marriott-owned brand has been in the planning stages for some time. Now, Ritz is combining with another operation that was set up and looking for a branding partner. A shipbuilding contract has been negotiated with Barreras Shipyard in Vigo, a yard that is well known for passenger ships and ferries.

Ritz-Carlton first went to sea in 1905, in Hapag’s Amerika, which had its own extra tariff Ritz-Carlton restaurant, with a staff that had been trained in Paris. The kitchen was directed by Auguste Escoffier.

Other ships with a Ritz-Carlton restaurant in the first part of the last century included Cunard Line’s Berengaria (ex-Imperator of 1912) and United States Lines’ Leviathan (ex-Vaterland of 1913). The concession was continued in the British and American ships when they were taken over after the First World War.

The Ritz-Carlton yachting brand will be able to carry some 35,000 passengers a year by 2023.

Last week also it was announced that Antarctica XXI would be acquiring its first newbuilding, the expedition vessel Magellan Explorer. The ship will be delivered for the 2019-20 Antarctic season. The new 4,900-ton vessel will measure 298 x 53 feet and she will have a service speed of 14 knots.

Magellan Explorer is being built by Chile’s Astilleros y Servicios Navales SA (ASENAV) in Valdivia. Interiors have been designed by Chilean studio Enrique Concha & Co. Among this company’s projects have been the Stella Australis, the Singular Patagonia hotel and the Alto Atacama Desert Lodge and Spa. 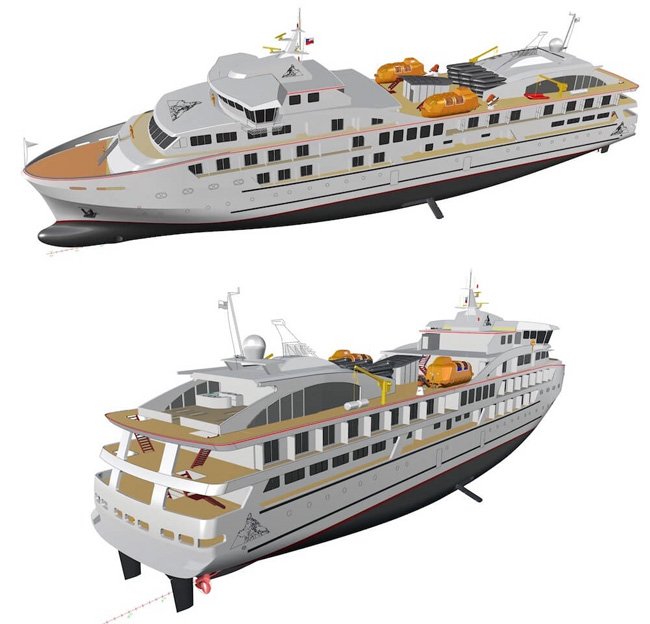 The Magellan Explorer’s capacity will be limited to a maximum of 70 passengers per Antarctic air-cruise departure, with each departure fed by a single flight.

The ship features fifty en suite passenger cabins in five categories, including single cabins. The cabins will range in size from 220 sq ft to 440 sq ft. Double cabins will have twin beds convertible into queens. Forty-two cabins will feature a large window and a private balcony, while eight cabins will have a porthole. Sixteen adjoining cabins can be reconfigured into eight two-environment suites.

Public areas will include a large forward-facing lounge that will also be suitable for briefings and presentations, an observation deck, a dining room that accommodates all guests and expedition staff in a single sitting, two meeting rooms, a gift shop, a protected outdoor barbecue area, a gym, and a sauna.

The bow of the ship is accessible to guests and will offer expansive views during exploration. Adventure activities, such as kayaking and snowshoeing, will also be offered to guests.

The Magellan Explorer has been planned specifically for the operation of Antarctic air-cruises, with technical features designed to support long periods of time away from port. Extended fuel range, comfortable crew quarters, spacious storage areas for provisions and supplies, and a well-equipped workshop for maintenance will be just some of the features of the Magellan Explorer.

ASENAV has built over 180 ships, including the Stella Australis

The ship is being built to the latest Polar Code specifications established by the International Maritime Organization and she will carry a Polar Class 6 ice-class. For comfort, the ship will feature stabilizers and for maneuverability bow and stern thrusters.

For this project Antarctica XXI built an alliance with two strategic partners that bring extensive shipbuilding and ship management expertise to the venture. In partnership with two Chilean investors, Antarctica XXI have created a new entity, Minke Shipping Co Ltd, to own the ship, which will operate on exclusive long-term charter to Anarctica XXI.

ASENAV has built over 180 ships, including the Stella Australis and previous fleetmates, and is currently building the 200-berth Ventus Australis and a ferry for the Great Lakes.