Expedition Cruising On Australia’s Kimberley Coast More Popular Than Ever 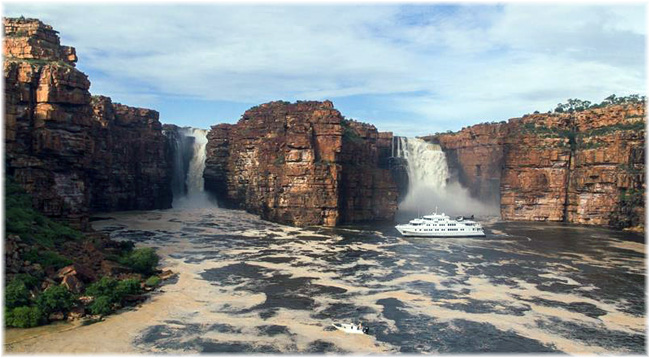 There’s little doubt that Western Australia’s Kimberley Coast is one of the world’s most desirable expedition cruising destinations, and in launching his company’s 2019 portfolio, Kimberley Cruise Specialists General Manager Andrew Castles has reminded travellers to book early or run the risk of missing out.

With availability for next year’s 2018 season already scarce across some of the Kimberley’s most popular ships, particularly during the peak May to July period, Mr Castles said that for some travellers attention was already turning to 2019.

“Every year we think it’s impossible for Kimberley cruising to become any more popular, and every year we’re surprised when it does,” he said. “We’ve had clients ringing us for several months imploring us to let them know as soon as 2019 schedules becomes available, to ensure that they can be first in line to secure the best cabins during the peak season.”

The launch of Kimberley Cruise Specialists’ 2019 program showcases a hand-picked selection of the best small ships operating in the region, from industry pioneers including True North Adventure Cruises and Coral Expeditions through to more recent additions to the Kimberley fleet including the former pearl lugger Kimberley Pearl.

Mr Castles, who has spent the past fifteen years operating and selling Kimberley cruises, said that his company was very particular about the cruise lines they partner with.

“There will be more than twenty ships of varying sizes promoting expeditions on the Kimberley Coast in 2019” he added. “We’ve chosen to work with just the very best cruise operators, allowing our expert staff to select the best ship to perfectly match each client’s expectations.”

And, it seems unlikely that the burgeoning popularity of Kimberley cruising will be slowing down any time soon. Mr Castles pointed to Coral Expeditions’ recent announcement of a new ship to join their Kimberley fleet in 2019 as a strong sign that confidence remains high amongst Kimberley cruising operators.

“The two existing Coral Expeditions ships are incredibly popular, and almost fully sold for 2018 already” he said. “Our clients are really excited by the new ship coming on line, and we expect a flurry of bookings once inaugural schedules are announced in coming weeks.”

Highlights of the 2019 program include a ten-night cruise from Darwin to Broome aboard Coral Discoverer, starting at AU$10,695 per person and a 13-night expedition aboard the luxurious True North from AU$22,995 per person.