Last week Crystal Cruises confirmed that its three new cruise ships would be smaller than 100,000 tons and carry more like 800 than 1,000 passengers. Meanwhile, at the launch of Scenic Eclipse in Croatia, Scenic announced a sister ship to be named Scenic Eclipse 2. And from Italy came news that MSC was considering entering the luxury ship market with four newbuildings.

Crystal Cruises has confirmed that its “Diamond” class newbuildings are going to be smaller than the 100,000 tons originally envisaged for its “Exclusive” class ships. And the new trio will no longer feature forty-eight 600 to 4,000 sq ft “Crystal Residences” that were to be installed atop the ship.

When announced in 2015, it was announced that the “Exclusive” class ships would carry 1,000 passengers each in all balcony suites and staterooms. In Seatrade Cruise Review’s December issue, Crystal president and ceo Tom Wolber said the concept would be different than originally conceived. Sources are now reporting 60,000-ton ships carrying up to 800 passengers, more similar in size to the existing 980-berth 68.870-ton Crystal Serenity and 848-berth 51,044-ton Crystal Symphony, but with a higher passenger space ratio of 75 tons per guest, compared to 70 and 60 on the earlier ships.

A Crystal spokeswoman confirmed that “we are looking at smaller ships without the residences for now.” She said the ship is still expected for 2022 delivery. When originally announced the first ship was to have entered service this year so we are now looking at a four-year delay.

MV Werften is going to build the “Diamond” class vessels, along with three 200-berth 25,000-ton Crystal Endeavor type Polar Class 2 expedition ships for 2020, 2021 and 2022 delivery, and a number of river boats for Crystal River Cruises as well.

On Wednesday, January 31, Scenic celebrated the launch of its first ocean cruise ship, Scenic Eclipse, from the Uljanik shipyard in Pula, Croatia. With construction almost complete, the ship is now beginning its fit out process. Scenic Eclipse confirmed to be on target for its debut on August 31. 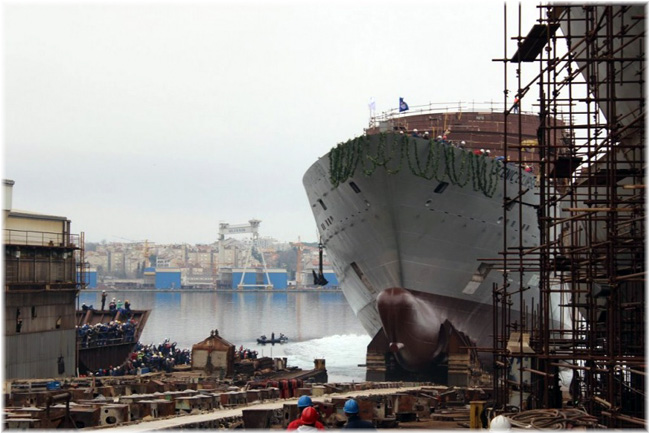 On January 31, Scenic celebrated the launch of its first ocean cruise ship, Scenic Eclipse, from the Uljanik shipyard in Pula, Croatia (Click to enlarge)

Following extraordinary global interest in the Scenic Eclipse, the company has now announced that its new flagship will be joined by a sister ship, Scenic Eclipse II. This ship will strengthen Scenic’s position as a leading innovator in the cruise industry, employing an unparalleled mix of design, luxury and technology.

To enter service in 2020, Scenic Eclipse II will make her maiden voyage from Athens to Lisbon, before the debut sailing season, which will include the European and Russian Arctic.

Itineraries will include remote destinations such as Russia’s White Sea, that pinnacle of Polar exploration, the Northwest Passage, rarely-visited southern Greenland and an Alaska to Russia crossing of the Bering Sea.

Scenic Founder and Chairman, Glen Moroney said the expansion of Scenic’s ocean cruise fleet was a natural progression for the company and one he is very excited about. “Since we first announced our foray into ocean cruising we have had unprecedented interest in Scenic Eclipse”, Mr Moroney said.

“The debut of Scenic Eclipse II will not only allow us to expand our offering and pioneer new destinations, such as the Russian Arctic, it will also allow us to continue our passion for innovation in design and innovation in handcrafted itineraries.”

Building will commence next year in Pula. Scenic Eclipse II will be of similar design, with 114 all-verandah suites, nine restaurants, eight lounges and bars and a luxurious spa. The ship will have a rating of Ice Class 1A (Polar Class 6).
Itineraries for the ship’s debut season will be released in April 2018.

Rumours MSC About To Join The Luxury Market

There are rumours circulating to the effect that MSC Cruises is planning to enter the luxury cruise market with an order for new luxury cruise ships from Fincantieri. This is not confirmed by the cruise line but the details being reported are pretty specific.

According to the Italian-based shipping publication Medi Telegraph, MSC Cruises is on the verge of placing this new order for four ships for the luxury market with Fincantieri. While Fincantieri’s own yards may have full orderbooks it is expected that they could be built by Fincantieri subsidiary Vard Holdings in Romania and/or Norway.

They would be smaller than any previous MSC orders, and would carry only 700 guests. No details were available of the tonnage but they are expected to be around 650 feet in length.

This would move MSC away from its trend of ordering huge mega ships carrying thousands of passengers and open the cruise line up to a new area of cruising, taking on cruise lines like Azamara Club Cruises, Oceania Cruises, Viking Cruises and perhaps Crystal and Regent.

To date, MSC’s participation in the luxury market has taken the form of its exclusive ship within a ship “Yacht Club” on its newer vessels.