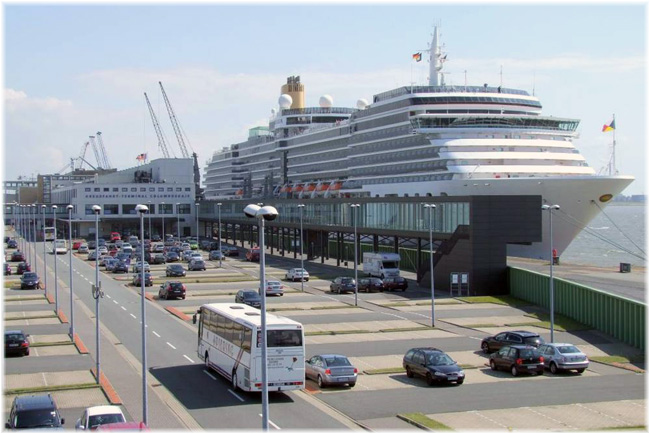 The Columbus Cruise Center Bremerhaven has enjoyed a really positive development in recent years. After our successful season in 2017, with 84 departures and 166,000 passengers, we now expect even more growth in 2018.

This season, a total of 112 departures and about 240,000 passengers will be handled by the Cruise Terminal Bremerhaven. Highlights will include the simultaneous berthing of four Phoenix Reisen vessels as well as the first visit of TUI Cruises’ new Mein Schiff 1. The season will open as early as January 5th with the arrival from the UK of Saga Cruises’ MS Saga Sapphire.

The first double mooring of the season will be on April 21st, when CCCB will welcome the Bonn-based operator Phoenix Reisen’s MS Deutschland together with the MS Astor of Transocean Kreuzfahrten.

In 2018 Bremerhaven will also host the handing over of two new vessels to their owners – the Norwegian Bliss in April and the AIDAnova in November. Both vessels will set out on their very first short trips from CCCB.

The Hanseatic City of Wismar welcomed about 7,000 cruise passengers last season. More and more people are wanting to experience for themselves the charm of the historic city and its surroundings. One day in particular will be remembered well by tourists and locals alike. On August 17th the city witnessed its first double mooring of cruise vessels, with the quay hosting the MS “Balmoral” as well as the MS “Saga Pearl II”. This meant the simultaneous arrival of well over 1,700 passengers.

The season in Wismar will be opened on April 14th with the arrival of Cruise & Maritime Voyages’ MS Astoria.