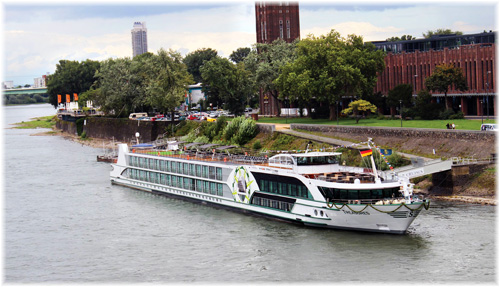 Tauck officially welcomed the ms Treasures and ms Esprit back into its riverboat fleet last week in Amsterdam, following a massive reconfiguration of the vessels’ interior spaces that has resulted in enlarged cabins and reduced passenger count.

The Treasures and Esprit are the last of Tauck’s four 110-meter ships to undergo the radical transformation. Tauck’s two other 110-meter ships, the ms Sapphire and ms Emerald, were similarly reconfigured a year ago, and returned to service in time for their 2017 sailing season.

With the reconfigurations, Tauck continues to prioritize creating larger cabins and roomier public areas for its guests, rather than taking the more conventional approach of maximizing passenger count. The Treasures and Esprit were fully gutted in a “down-to-the-studs” refurbishment, with the most dramatic change occurring on their Ruby (middle) Decks, where 30 150-square-foot cabins in each ship’s original configuration were replaced by 20 larger cabins measuring 225 square feet. With the total number of cabins reduced from 59 to 49, each ship’s overall capacity has been reduced from 118 passengers to 98 per vessel – a 17% reduction.

The Treasures and Esprit will sail on Tauck’s cruises along the Rhine, Main and Danube rivers, including its popular “Amsterdam to Budapest by Riverboat” itinerary. With the enhanced comfort resulting from larger cabins and fewer guests, the company expects this14-night journey (which also operates from Budapest to Amsterdam) to become even more popular.

“With this year’s reconfiguration of the Treasures and Esprit – and with identical transformations last year of the Sapphire and Emerald – we’ve reimagined and enhanced half of our riverboat fleet, said Tauck CEO Dan Mahar.

“Now more than ever, we believe that we have the finest, most elegant riverboats on Europe’s rivers. Yet with that being said, we continue to maintain that what truly distinguishes Tauck river cruises is our 93 years of destination expertise, and our unmatched ability to tell the cultural and historical stories of the places we visit. The onboard experience we deliver is the perfect complement to those signature Tauck experiences our guests enjoy ashore,” Mahar concluded.

In addition to the 20 new 225-square-foot cabins, each of Tauck’s 110-meter ships already boasts 14 300-square-foot suites. As a result, cabins measuring 225 square feet or larger now account for 69% of all accommodations – the highest percentage of such cabins on any 110-meter riverboats in Europe. Even with the lowered passenger count, Tauck continues to staff each ship with a Tauck Cruise Director and a full complement of three Tauck Directors. By contrast, other lines often have just a single cruise director attending to the needs of up to 190 passengers.

NEW ARTHUR’S RESTAURANT FEATURES DEDICATED KITCHEN, EXPANDED MENU
Another significant enhancement can be found on the Treasures’ and Esprit’s Diamond (upper) Decks, where the ships’ second dining venue, The Bistro, has been upgraded with its own dedicated kitchen and chef. On each ship, the Bistro has been renamed Arthur’s in tribute to company chairman Arthur Tauck Jr., and its expanded menu will continue to provide more casual alternatives to the fine dining selections offered in the ships’ main Compass Rose restaurants. Tauck first introduced the concept of a second riverboat dining venue in 2006, and the enhanced Arthur’s restaurant is already featured on Tauck’s four 135-meter ships.