Last week SunStone Ships firmed up the second of a planned ten expedition ship orders from the China Merchants shipyard near Shanghai. In Chile, Antarctica 21 revealed its new branding. And EYOS Expeditions is planning an Antarctica explorer yacht voyage with the 30-berth Legend for January 2019.

SunStone Ships of Miami has firmed up a shipbuilding contract for its second expedition newbuilding with China Merchants Industry Holdings. SunStone is the world’s largest supplier of expedition ships on a charter basis.

The first ship, the Greg Mortimer, will be delivered to Aurora Expeditions in the summer of 2019, with a second ship scheduled for delivery in August 2020. Similar to the first ship, the second vessel will have an Infinity-class X-bow.

The Infinity II contract was signed by David Zhu, director of CMIH, and Lund.
SunStone has a contract to build four expedition ships in China with an option for an additional six. 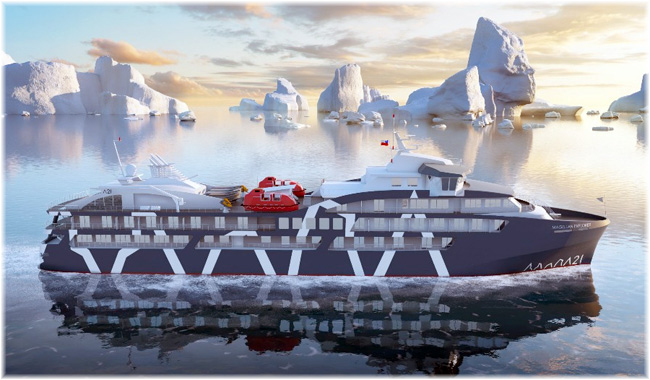 Antarctica 21, as it will now be known, has announced a new ship livery and updated corporate branding ahead of the delivery of its new 100-berth Magellan Explorer, which will enter service for the 2019-2020 season in Antarctica.

The new livery, while still preliminary, shows off a dynamic blue hull with white highlights.
Antarctica 21, or in short, A21, will be the new name for Antarctica XXI, as the company has been known since its inception.

Antarctica 21 offers a unique fly-cruise program whereby passengers are flown to King George Island, eliminating the sometimes rough Drake Passage crossing.
Under construction in Chile, the Magellen Explorer will join two other vessels in the company’s fly-cruise program. The other two ships, the 72-berth Ocean Nova and 114-berth Hebridean Sky, operate on charter. 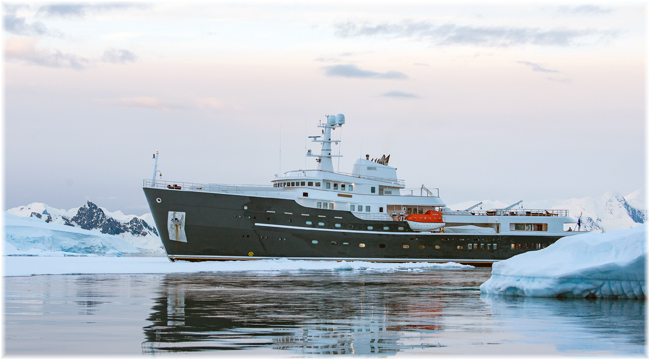 EYOS is planning to offer a limited number of scheduled yacht departures where travellers will be able to book individual cabins rather than chartering a full yacht. The first cruise is a one-week Antarctic expedition on board the 254-foot 30-berth explorer yacht Legend, which is scheduled for January 6 to 13, 2019.

The 2,407-ton Legend was built in the Netherlands in 1974 as the large ice-breaking tug Gigant for Russian owners, but the 40-year-old icebreaking hull was completely rebuilt between 2015 and 2016 into the explorer yacht Legend.

“We are creating an experience that was, up until now, available only to private yacht owners or those who chartered an entire yacht”, said EYOS ceo Ben Lyons.

EYOS pioneered fly in superyacht expeditions to Antarctica, and guests on this expedition will avoid the inconvenience of sailing over the notorious Drake Passage in exchange for a full week on the Antarctic Peninsula.

Prices for the one-week January departure begin at €25,000 per person and include pre and post hotel nights in Punta Arenas, flights between Punta Arenas and Antarctica, and all drinks and activities onboard. Three EYOS guides will be on board.

Later this year, EYOS will introduce other scheduled expeditions on board superyachts in the South Pacific and the Maldives, as well as those on board Legend.

Yet another company is planning to get involved in the non-polar explorer yacht business. UK-based Globe Regal Yachting, whose 394-foot 100-berth Perle Mesta project featured recently in Forbes magazine, is working with European luxury hotel brands to launch the new ship as a hotel yacht with only fifty cabins for her 100 elite passengers.

Globe Regal is working with the same Hijo de Barreras shipyard in Portugal that is building the three 298-berth non-polar mega yachts for Ritz-Carlton.