The International Association of Antarctica Tour Operators (IAATO) reported a record of 51,700 cruise and expedition visotors to Antarctca in 2017-18, a new record. The 1st Quarter Earnings report from Lindblad Expeditions came as evidence of this growth. Elsewhere, Princess is reporting strong demand for a UK to Canada and New England cruise in 2019 with the 2,670-berth Sapphire Proncess.

The International Association of Antarctica Tour Operators (IAATO) has reported its visitor numbers for the 2017-2018 Antarctic season. The upward trend in visitor numbers recorded since 2011-2012 continued in 2017-2018.

Overall, the total number of Antarctic visitors in 2017-2018 was 51,707, an increase of 17% over the previous season.
The majority, 41,996, of visitors travelled by sea to Antarctica on vessels offering excursions ashore, representing a 16% increase over the previous year.
Of these, 3,408 flew to the South Shetland Islands on the Antarctic Peninsula where they boarded a vessel for onward travel.

In addition, 9,131 visitors experienced Antarctica on one of four cruise-only vessels that do not make landings, an increase of 22% since 2016-2017.

Terry Shaller of Ponant, chair of the IAATO executive committee said: “Antarctica receives relatively few visitors compared to other destinations. The number of tourists who set foot on the continent this past year (42,576) is less than half the number of spectators at the Super Bowl.

According to Lindblad ceo sven-Olaf Lindblad, the company is off to a very strong start in 2018.
The increase is due, in large part, to new capacity added from launching the National Geographic Quest last July, and maintaining high-occupancy levels across the fleet, while growing net yields.

Almost forty years ago, P&O began offering an annual sailing from Southamn to Canada and New England and also New York, using such ships as the first Oriana.
These annual cruises usually took place in the late summer or, if the leaves were to be caught, in the autumn, and before long P&O has been joined by the likes of Fred. Olsen Cruise Lines, Saga and Cruise & Maritime Voyages with 32- to 35-day voyages to Canada and New York. 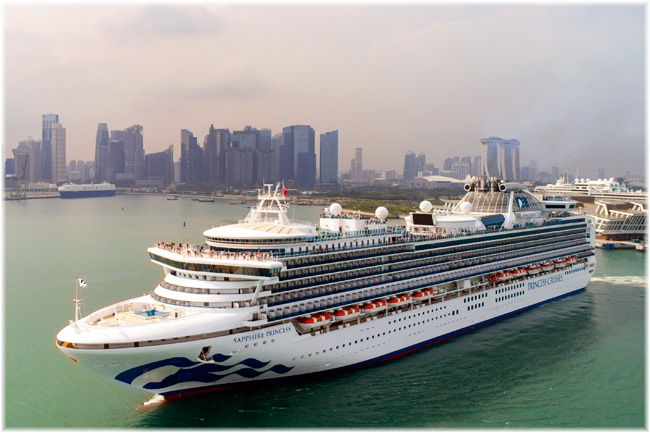 The Sapphire Princess in this image at Singapore

Now Princess Cruises has followed this coirse as well, with one of its larger ships, the 2,670-berth Sapphire Princess, with a round trip sailing from Southampton to Canada and New England, with a call in New York.

This cruise is currently Princess Cruises’ best-selling voyage for 2019 according to the line’s UK office. UK bookings are being made more quickly for the cruise than any other Princess sailing over the past five years. The voyage, which went on sale in December, already has four times as many guests as the next highest-seller.

Princess claims it is the first time that one of its ships will sail on a return journey to Canada and New England from the UK. The 24-day cruise will depart on September 14, 2019, with ports of call including New York, Boston, Saint John, Halifax, Charlottetown and St John’s, with two days in New York.
A maiden Princess visit will be made to Rockland, Maine, home of the Maine lobster festival.