Last week came news that Carnival Corp & plc, through a member of its subsidiary Holland America Group, was acquiring the 400,000-passenger White Pass & Yukon route, the narrow gauge railway that connects Alaska’s Inside Passage with Canada’s Yukon Territory over the Gold Rush route of 1899. Elsewhere, we look back a little more than a century to one of the world’s first expedition cruise ships, the Polaris of 1913, which in 1914 would become Shackleton’s Endurance.

Holland America Princess Alaska Tours announced last week that it has entered into a purchase and sale agreement with TWC Enterprises Limited to acquire its White Pass & Yukon Route division, which includes the White Pass’s port, railway and retail operations in Skagway, Alaska. The transaction is set to close on July 31, 2018.

The White Pass & Yukon Route is a narrow gauge railway linking the port of Skagway, Alaska, with Whitehorse, capital of Yukon. It has no direct connection with any other railrway.

Construction began in 1898 during the Klondike Gold Rush. Today, the White Pass is a national historic engineering landmark, carrying 400,000 passengers a year. 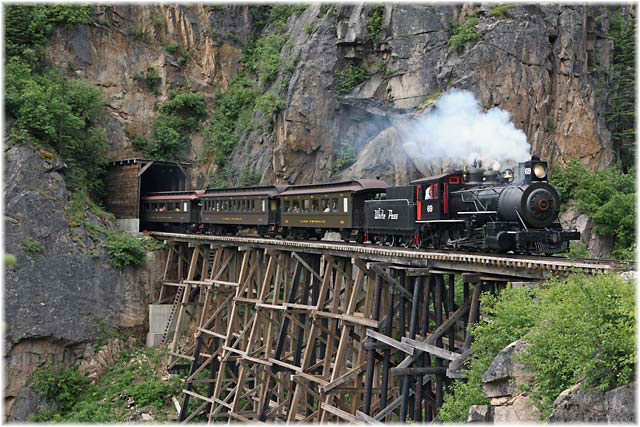 Holland America Princess Alaska Tours has also executed a memorandum of understanding with Ketchikan-based Survey Point Holdings Inc and one of its affiliates to create a joint venture making Survey Point the managing partner of the port, the White Pass Scenic Railway and the associated retail operations it is acquiring from TWC.

The partners plan to make investments in Skagway and the surrounding region that will include expansion of docking facilities to accommodate the latest generation of cruise ships.

Survey Point have been actively engaged in Skagway operations for over forty years. 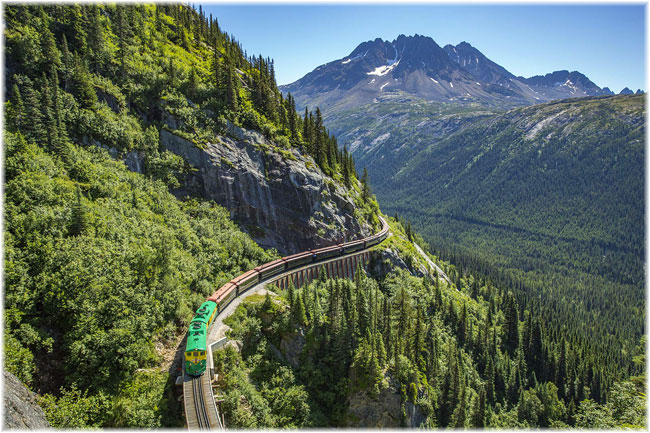 “As the gateway to the legendary Klondike Gold Rush region, Skagway is beloved by our guests and crew for its warm hospitality and distinctively Alaskan array of sightseeing and recreational activities,” said Stein Kruse, group ceo of Holland America Group and Carnival UK.

Survey Point and its affiliates will own a majority stake in the company, and Holland America Group will retain a minority position in the enterprise.

The 110-mile White Pass & Yukon Route climbs from sea level in Skagway to almost 3,000 feet at the summit in just twenty miles and features steep grades of almost 3.9%. The tight curves of the White Pass called for a three-foot narrow gauge railway.

The Endurance, the ship that becamne famous for becoming trapped in the Antarctic ice under Ernest Shackleton in 1918, has been in for much discussion in recent years, but most do not know that she was originally designed as en expedition cruise ship rather than a naval vessel, as has been so many of her predecessors.

Shackleton’s ship was built at the Framnaes shipyard in Sandejord, Norway, and completed in December 1912. She was built under supervision of a master wood shipbuilder for maximum strength, and her original name was Polaris, for the North Star. With a length of 144 feet and a 25 foot beam, she measured 348 gross tons.
She was built as an ice-capable steam yacht to provide luxurious accommodation for small tourist and hunting parties in the Arctic. As launched she had ten passenger cabins, a spacious dining saloon and galley, a smoking room, a darkroom in which passengers could develop photographs, electric lighting and even a small bathroom.

She was designed with a very sturdy construction for polar conditions.  Of her three masts, the forward one was sqiuare-rigged, while the after two carried fore-and-aft sails. Endurance had a 350 horse-power coal-fired steam engine capable of up to 10.2 knots.

The Polaris was built for Adrien de Gerlache, a former Holland America Line officer who had organised the Belgian Antarctic Expedition of 1897-99, and Norwegian shipowner and whaling magnate Lars Christensen, who intended to use her for polar cruises for tourists hunting polar bears. Financial problems led to de Gerlache pulling out, leaving Christensen unable to pay the shipyard the final amounts to hand over and fit out the ship.

For over a year Christensen attempted to sell the ship with her unique design as an ice-capable passenger-carrying ship. But with relatively little space for stores and no cargo hold, she was useless to the whaling industry.
Meanwhile she was too big, slow and uncomfortable to be a private steams yacht.

Eventually, Christensen was able to sell the ship to Ernest Shackleton for £11,600, which represented a significant loss, barely covering the outstanding payments to Framnaes.
Her role would be one in exploration rather than tourism, as had been intended, but Svalbard, where she would have worked was at the same time developing as the world’s first polar tourist destination.