Miami-based Victory Cruise Lines, the most recent specialist in luxury cruises on the Great Lakes and St Lawrence River, today welcomed the inaugural voyage of its new vessel, the 202-berth Victory II, to Detroit. Not quite completed in 2001, when parent company American Classic Voyages closed, she was to have been completed as the Cape Cod Light, the second ship for Delta Queen Coastal Voyages.

Although the vessel was finally completed in 2004, she was not placed into passenger service, meaning that this cruise was in fact the ship’s first revenue passenger voyage.

In the fourteen years since completion she had spent much of her time either laid up in fresh water or employed as an accommodation ship in UK and European waters. She was finally completed as a fully-fledged cruise ship this spring in Sweden.

The most noticeable change to the ship is the glass enclosure that now surrounds the former Hot Rock Grill on her stern.

The 210-berth Saint Laurent. In this pic she is moored in Montreal (Click to enlarge)

Before departure, the Port of Montreal awarded a commemorative plaque to Capt Giorgios Theodorou, who earlier in his career spent many years with Celebrity Cruises and Azamara Club Cruises, as well as having been master of sister ship Saint Laurent (built as Cape May Light and now Victory I) for Haimark in 2015.

As the ship prepared to leave Montreal, Bruce Nierenberg, chairman of Victory Cruise Lines, had said “This is a fantastic day for us as we bring into service, here in Montreal, our second ship in the region. With this ship, we become the largest cruise operator on the Great Lakes.” 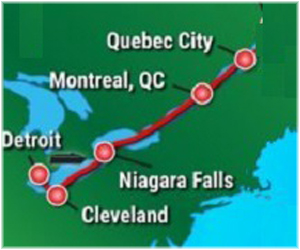 With its two ships, Victory Cruise Lines offers itineraries that lets its passengers discover the Great Lakes and the St Lawrence, with routes stretching from Halifax to Thunder Bay. The Port of Montreal is also a major component on Victory’s route between Montreal and Detroit and Halifax and Detroit.

The Victory II embarked passengers on July 27 and departed Montreal on July 28 to sail north to visit Quebec before continuing to the St Lawrence Seaway, Toronto, the Welland Canal (for Niagara Falls) and Cleveland, and reached Detroit this morning.

s.s. Keewatin at her Canadian home port of Port McNicoll (Click to enlarge)

With the Victory I and Victory II both now in operation, this marks the first time in over fifty years that any Great Lakes cruise operator has been able to offer two ships at the same time. Great Lakes cruising has been exclusively a one-ship operation in the past.

The last time one fleet operated two ships was 1965, when Canadian Pacific Great Lakes Steamships operated the 288-berth Clyde-built sister ships Assiniboia and Keewatin between Port McNicoll on Georgian Bay, Sault Ste Marie and what is now Thunder Bay. The Keewatin is now a museum ship at Port McNicoll.

s.s. South American was a sister to the s.s. North American (Click to enlarge)

On the US side, it was as long ago as 1962 that the Georgian Bay Line operated two ships, the 428-berth North American and South American, the latter of which survived until 1967, when she cruised between Detroit and Montreal to the Expo’ 67 World’s Fair.

Apart from these operations, from the opening of the St Lawrence Seaway, in 1959 until 1963, the Netherlands-based Oranje Line offered cruises on three passenger-cargo ships carrying brtween 60 and 115 passengers between Montreal and Chicago. These voyages were offered as part of their overseas voyages between the Great Lakes and Europe.

The Victory I is offering six Toronto-Chicago cruises this year and will offer ten such cruises in 2019. In the spring and autumn the ships will offer Canada/New England cruises between Boston and Halifax. And in the winter they will offer departures from Miami to Cuba and Miami to the Yucatan in Mexico.

Fred. Olsen Travel Ltd, operating as Fred.\Holidays, has been appointed as UK general sales agent for Victory Cruise Lines and Sterling fares plus UK flights are now available through travel agents in the UK.