Last week saw three pieces of news from Germany, first with the keel-laying ceremony for the 200-berth Crystal Endeavor at Stralsund, and second with a reveal of the rendering of the new downsized 65,000-ton (as oposed to 100,000-ton) Crystal Diamond class ships. Elsewhere in Germany, the LNG-powered AIDANova was floated out at Meyer Werft in Papenburg. 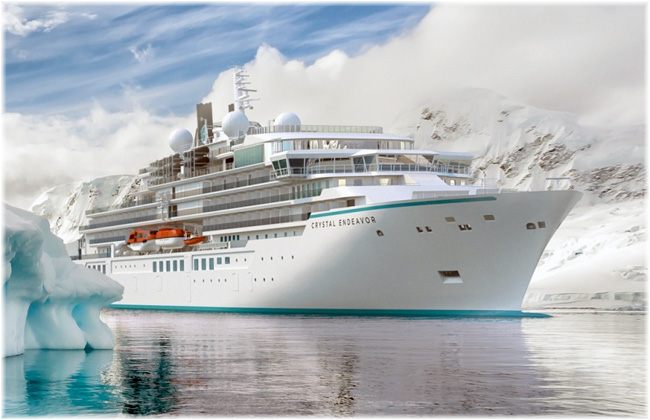 According to Seatrade Cruise News, Merkel said it was an emotional day for her as she returned to her political home, Mecklenburg Vorpommern. ”People here in Stralsund will always do their best to create great value … We know how to compete. We are very proud in Mecklenburg Vorpommern and Germany and we want to make the label “Made in MV” an attraction,” she said.

Genting Hong Kong chairman and ceo Tan Sri Lim Kok Thay was also in attendance as part of Genting’s plan to revive shipbuilding on the northern shores of Germany. Historically, Germany has built 25% of the world’s cruise ships. Thanks to Genting Hong Kong’s investment, that will now go up to 35% by 2020, said Lim. 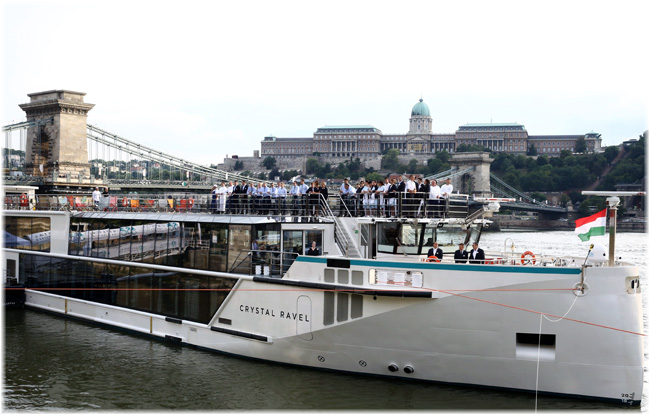 After a spate of European river ship introductions, Crystal Endeavor’s keel-laying shifts the focus back to Crystal’s ocean-going itineraries.

The Crystal Endeavor’s 20,000-ton sister ship is now scheduled for delivery in 2021, a year later than had been planned. And the Crystal Diamond, the line’s first 65,000-tonner, will follow in 2022.
Crystal Endeavor is now open for bookings for her first season, running from August 2020 through January 2021. And some 25% of her inaugural Antarctic seasion is already booked.

Crystal Cruises’ 65,000gt 800-berth Crystal Diamond, first in its new ocean-going class, will have a profile similar to that of the existing ocean ships, but with more decks of balcony accommodations, the first rendering shows.

And the funnel will be closer to midships than the present engines-aft ships.

The rendering was unveiled last week in Stralsund, during the keel-laying ceremony for the Crystal Endeavor.
To be built in Stralsund, the Crystal Diamond will be the world’s largest and most luxurious ship in the luxury segment.

AIDANova Floated Out At Papenburg 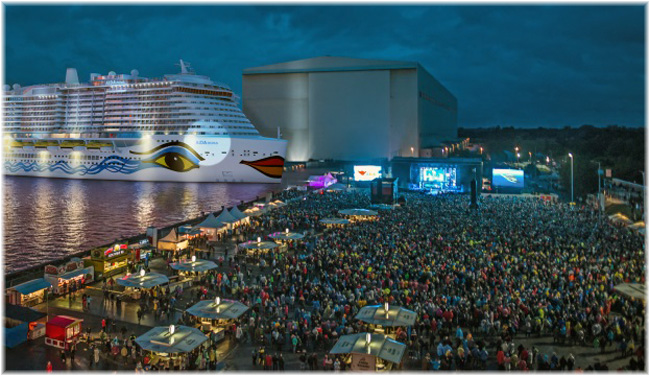 The AIDAnova, the world’s first LNG-fueled cruise ship, made her debut Tuesday in a float out ceremony at Meyer Werft Papenburg and will now be positioned at a dock at the shipyard for final hotel outfitting ahead of a delivery this autumn.

The 184,000-ton ship will be able to accommodate 5,200 passengers. Later this month, AIDA will christen the ship in an open air concert at the shipyard.

Delivery is scheduled for November 15 in Bremerhaven and she will start revenue sailings in December in the Canary Islands.