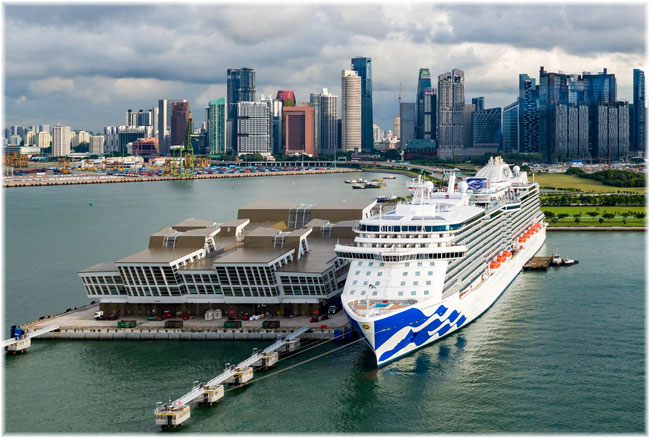 Majestic Princess has completed half of her 23-day Grand Asia voyage from Shanghai which started on 24 August and arrived in Singapore after visiting Busan, Hong Kong, Nha Trang, Phu My (Ho Chi Minh City).

Majestic Princess is now enroute to Sydney for the second half of the voyage that will call at Darwin and Brisbane along the way.

Majestic Princess, the only Royal-class ship based in Asia, completed her summer season homeporting in Taipei followed by Shanghai and will be making her maiden calls to destinations in Australia, New Zealand and South Pacific during this upcoming six-month Australian homeporting season.

Majestic’s first sailing out of Australia will be a 12-day roundtrip cruise from Sydney to New Caledonia, Vanuatu and Fiji that starts on 15 September. This is followed by her first Across The Ditch sailing round trip from Sydney that includes scenic cruising along the Fiordland National Park across the Tasman Sea to seven ports in New Zealand (Dunedin, Akaroa, Wellington, Tauranga, Auckland and Bay of Islands)

Another key highlight for Majestic’s Australian season is that guests combine immersive cruisetours that includes visits to Ayers Rock, Cairns and Darwin on select 12- to 13-day Australia and New Zealand cruises.

The 3,560-guest Majestic Princess celebrated her first anniversary in May this year and joins Golden Princess, Sea Princess and Sun Princess on a total of more than 70 cruises to over 30 destinations in Australia, New Zealand and South Pacific.

Majestic will be returning to Singapore in April 2019 on another Grand Asia voyage from Sydney to Hong Kong. She is the only ship in the Princess fleet to feature two restaurants that offer menus designed by Michelin-star chefs and has the largest duty-free shopping at sea at 12,000 sq ft.

Majestic Princess is the third ship in the Royal class of ships, representing the newest and largest ships in the Princess Cruises fleet, which includes the Regal Princess and Royal Princess. Three more Royal-class ships will be launched in the next three years: Sky Princess in October 2019, Enchanted Princess in 2020, and the sixth in 2021. Two Next Generation LNG Cruise Ships are slated to be delivered in late 2023 and spring 2025, respectively.