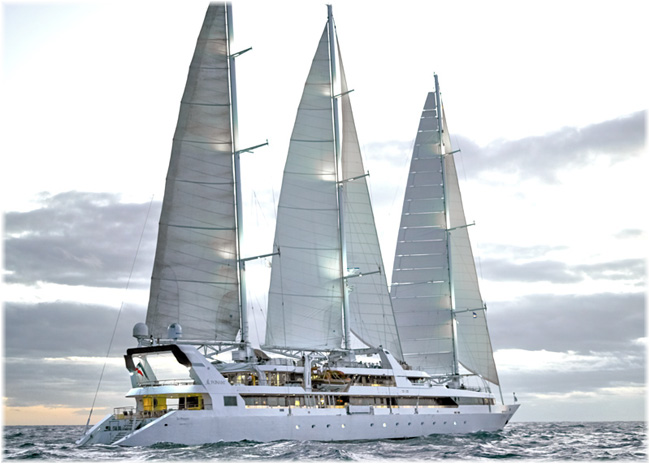 Introduced as part of the sailing cruise-vessel project Silenseas, launched two years ago by Chantiers de l’Atlantique, the revolutionary Solid Sail® concept has been tested on Le Ponant since 31 October.

Two patents have been filed—in 2009 and 2017—for the new type of sail, made of fibreglass, carbon and epoxy-resin panels in a carbon-slat frame. This new technology will significantly reduce energy consumption tied to propulsion, and thus considerably reduce the environmental impact.

On 25 October of this year, solid sails of more than 300 m2 were installed on Le Ponant during a technical stop in Marseille, France. As the three-masted ship sets sail for Cape Verde before embarking on a transatlantic voyage to Cuba, the prototype, on a 50% scale, will be tested for one year on the company’s sailing vessel.

“When Chantiers de l’Atlantique offered to collaborate with us on solid-sail technology, we were immediately interested. Le Ponant, the historic sailing boat behind the company, continues to be the flagship of our fleet, and sail propulsion is without a doubt an energy of the future. Protecting the environment is a key priority for PONANT, so the company is following this technology closely. We will of course be paying very close attention to the outcome of this test”, says Jean-Emmanuel Sauvée, CEO of PONANT.

“We are confident that the Solid Sail® propulsion system can be a solution for passenger vessels in the future, allowing for significant operational gains both environmentally and economically speaking. We had already carried out tests with a smaller version of the sail on the monohull of Jean Le Cam, the skipper on the Vendée Globe. Today it involves the largest Solid Sail® systems ever tested, and we considered PONANT the partner of choice for these tests”, explains Laurent Castaing, head of Chantiers de l’Atlantique.