Hurtigruten announced this weekend that it would be adding Alaska to its expanding list of worldwide destinations in 2020, with a program of cruises that will turn at Vancouver and Seward, as well as one that finishes at Nome in preparation for its 2020 Northwest Passage transit. Down in Chile, meanwhile, progress continues on Antarctica 21’s new Magellan Explorer. And in New York, there is talk about bringing the former North Atlantic speed queen United States into a project that Google are involved in as a tenant.

Norwegian expedition cruise specialist Hurtigruten claims to be the world’s greenest and most extensive expedition cruise operator. The addition of Alaska will now expand the company’s growing cruise program, and will offer more than 250 destinations worldwide in 2020-21.

Hurtigruten will run a series of eight 8 to 18-day cruises through the Inside Passage that connects Alaska and British Columbia. Four itineraries will be offered between Vancouver and Seward, two round trip cruises from Vancouver, and a voyage from Vancouver to Nome.

“Alaska is a perfect fit for Hurtigruten and our expedition cruise concept. We will go where the big ships can’t” said Hurtigruten ceo Daniel Skjeldam. Included will be off-the-beaten-track destinations such as Petersburg.
With delivery of the new 540-berth Roald Amundsen, Hurtigruten will also offer its widest ever selection of Antarctica voyages, with more than thirty different itineraries to choose from.

The new ship will conclude her 2020 Alaska season with a Northwest Passage transit from Nome to Halifax via the Canadian Artcic and Greenland.

The 2020-21 Hurtigruten expedition program will also include trips via Spitsbergen to Russia and Franz Josef Land, a selection of Svalbard expeditions on multiple ships, warm water expeditions to the Caribbean, and several South and Central America voyages on the Roald Amundsen.

The 2020 season will also mark the debut of Hurtigruten’s second hybrid ship, Fridtjof Nansen, which will explore Greenland, Iceland, the Norwegian fjords and, like her namesake, Antarctica. 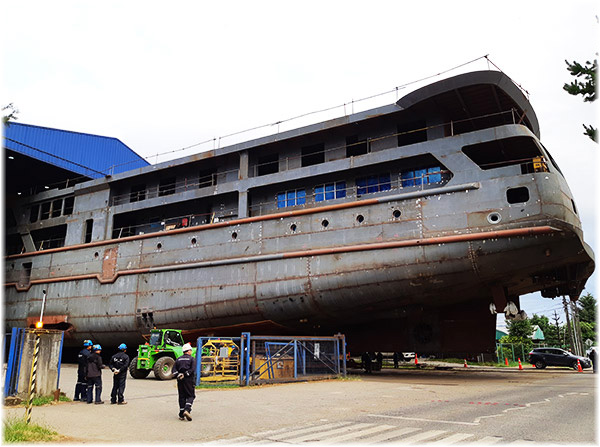 Still in the field of expedition cruises, Antarctica 21 has just provided us with an update on its new ship, the Magellan Explorer, presently being built at the Asenav shipyard in Valdivia, Chile.

As of early December, almost 90% of the ship’s overall structure had been completed, including the hull and superstructure. And the ship’s building program is progressing according to schedule.

On December 8, the Magellan Explorer was moved to a new area of the shipyard,  near an access to the Calle Calle River where she will be launched in February.

New York’s RXR Realty, which has publicly expressed the idea of acquiring a former North Atlantic liner to dock beside a Manhattan pier project it owns, for use as a hotel, has entered a deal with the owners of the SS United States to look into restoring the massive, rusting ship that has loomed over a Philadelphia dock for more than 20 years now.

RXR president Michael Maturo first said in 2015 that the company was considering docking an out-of-commission ocean liner beside its Pier 57 office and retail project, now largely leased by Google.com LLC, for overnight visitors.

An artist’s rendering on the website of New York-based Handel Architects, prepared for RXR, depicts the S.S. United States as a floating hotel and event space at Pier 57.

Google is ready to purchase the Chelsea Market building in order to expand its New York footprint, with more space at Pier 57.

Google had already agreed to lease 250,000 sq ft at the development but is now looking to add 70,000 sq ft of office space and 50,000 sq ft of community-based public outdoor space, educational programs, and cultural events.

Google is also looking to add a ferry landing at the site, but needs approval from the Hudson River Park Trust for the expansion deal to be finalized.

The RXR concept would see the s.s. United States moved to Pier 57 and the redesigned space would include a new hotel, coupled with public space at the water’s edge.

Plans include connecting the retail spaces at the Pier with a public plaza that would connect directly to the ship at water level. The deck would serve as the “street floor” lobby for the hotel with direct access from the new public space. Above, the ship’s decks would combine 800+ micro-luxury hotel rooms, a beach and winter club, museum, restaurants and night clubs in order to create a density that draws the public into and around the site.

Two former North Atlantic liners have already been converted into hotels, the s.s. Rotterdam, in its namesake city, and the Queen Elizabeth 2 in Dubai.