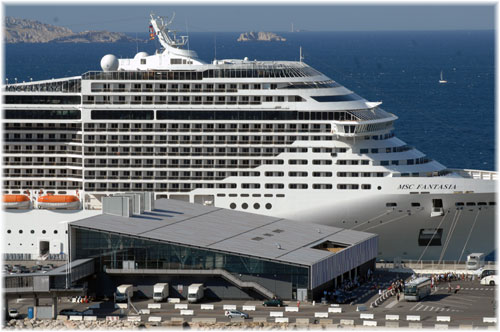 Volumes last year in key areas of activity confirmed Marseille Fos as the leading French cargo and cruise port – a result matched by dynamic progress at its logistics and industrial sites.

Passenger throughput: 3 million (+11%)
The record three million milestone was marked by the cruise sector’s 15% jump to 1.7m passengers, which included 244,000 in October alone. The port expects close to 1.9m in 2019 and 2.0m next year. Marseille is already the main cruise hub in France and now the fourth largest in the Mediterranean. Ferry passenger carryings rose 6% to 1.3 million, including increases of 12% on Algerian services and 5% on Corsica links, which recorded a third consecutive year of growth.

Shiprepair
In 2018 Marseille’s fast-growing shiprepair facilities drydocked 99 vessels (+1%) and handled 133 afloat repairs (+25%). Capacity was enhanced with the October 2017 reopening of the giant Drydock No.10, the Mediterranean’s largest and third biggest in the world. At 465 metres long and 85 metres wide, it is aimed primarily at mega-cruiseships but also the gas carrier, bulker, container and offshore markets. Costa Cruises has a one-third stake in repairer Chantier Naval de Marseille (CNdM), which also operates drydocks 8 and 9. Work is now due to start on a 5.5 hectare site dedicated to the repair of large pleasure vessel repairs, which follows last year’s agreement between the port authority and Monaco Marine.