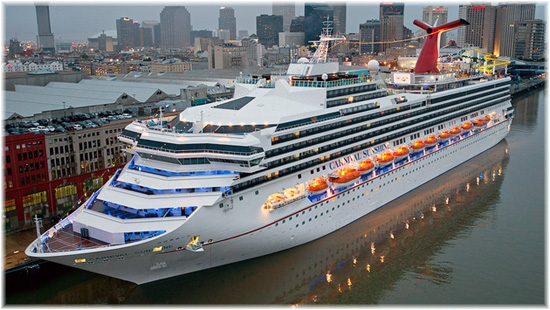 The Port of New Orleans (Port NOLA) set a new record in 2018 with 1,182,111 cruise passenger movements, up 2.3 percent compared to a year ago. A 23 percent surge in guests taking Mississippi River cruises helped buoy the total, with new and larger ships set to sail from New Orleans both in the Caribbean and on the River in 2019.

“Port NOLA’s success is due in large part to the hard work of the stevedores, labor, cruise terminal staff and the support of local businesses and tourism partners,” said Brandy D. Christian, Port NOLA President and CEO.

“The popularity of New Orleans as a cruise port and our commitment to customer service proves again why Port NOLA is a catalyst for local businesses. With an increase in passengers, we see those increased benefits – from florists and food wholesalers to hotel and restaurant staff. Our homeport status is important for the local economy and helps us fulfill our role as an economic engine for Louisiana.”

In 2018, 235 passenger ships called on Port NOLA, compared to 229 in 2017, and momentum and diversification continues to build. In September, Disney Cruise Line announced it will sail from Port NOLA in early 2020. The 2,700-passenger Disney Wonderwill embark on a variety of Caribbean and Bahamian cruises from New Orleans – marking the first time Disney Cruise Line will have a homeport in Louisiana.

“Port NOLA is one of Carnival’s most popular homeports and the Carnival Valorand Carnival Gloryare wonderful ships that provide a wide array of exciting dining, beverage, entertainment and activity choices,” Christian said. “As demand for cruises continues to grow, our cruise line partners are responding by deploying newer ships with more capacity and amenities.”

Port NOLA, the sixth-largest cruise port in the United States, also made headlines in November 2018 when it welcomed its largest cruise ship to date,the 4,000-passenger Norwegian Breakaway,which will sail seven-day cruises through April 2019. In November 2019, Norwegian Cruise Line will replace the Breakawaywith its newer sister ship, the Norwegian Getaway. December 2018 also marked the return of Royal Caribbean International when the 2,050-passenger Vision of the Seasarrived sailing seven-day itineraries through March 2019.

“Ninety percent of cruise passengers travel from out of state and 73 percent spend a day or two in New Orleans either before or after their cruise,” Christian said. “Of those, 75 percent report making a purchase in the Crescent City and these passengers generate over 306,000 room nights per year in New Orleans-area hotels.”