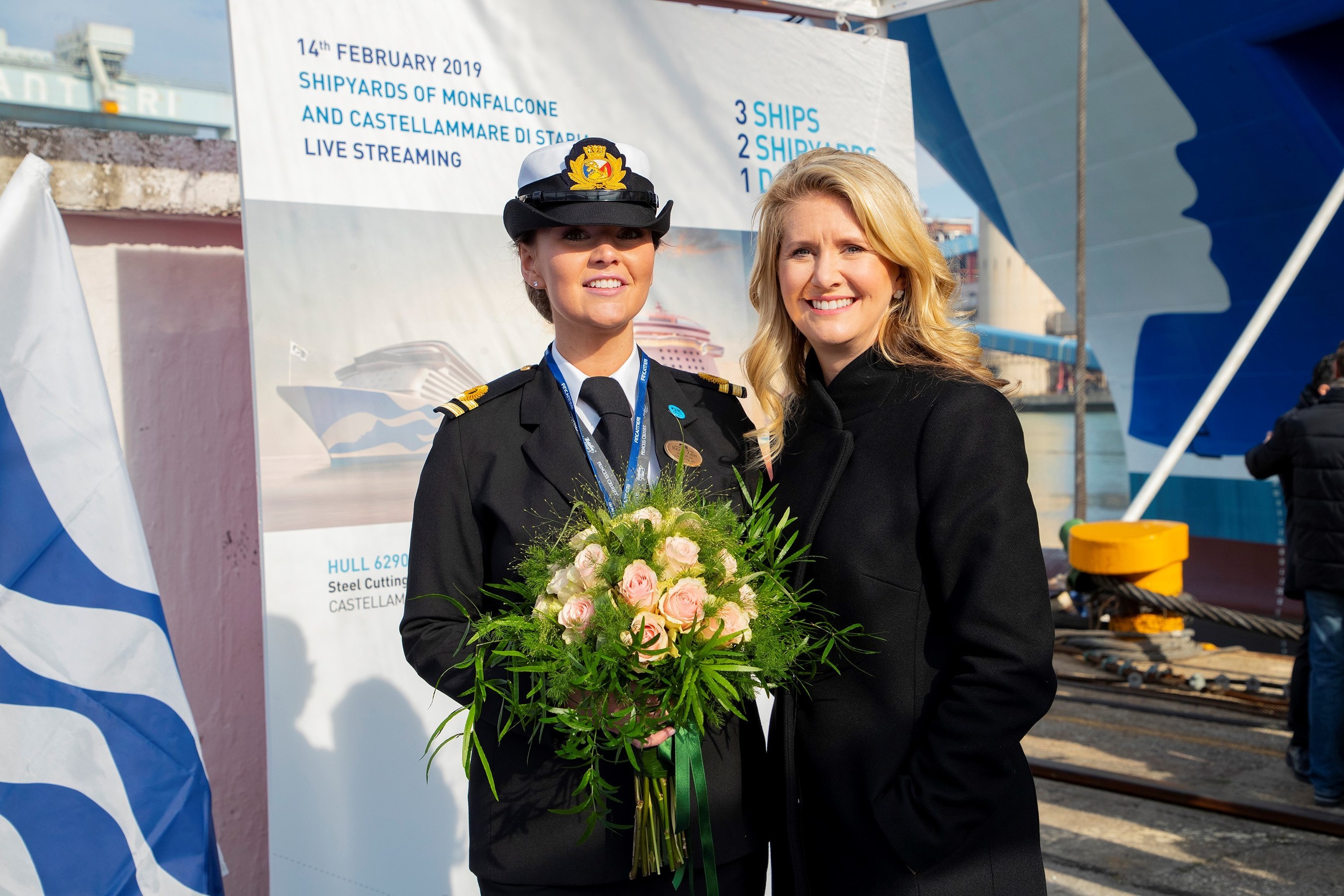 Princess Cruises is growing and today major milestones for three ships under construction at the same time were celebrated, at Fincantieri Shipyard in Monfalcone, Italy.

The three milestones included the introduction of the Sky Princess crew member who was nominated by her peers to serve as Madrina to celebrate the recent float out of the ship which will enter service in October 2019; the keel laying ceremony for Enchanted Princess launching June 2020 and the steel-cutting ceremony for the sixth and final Royal-Class ship, yet to be named, debuting 2022.

With two additional ships on order for delivery in 2023 and 2025, Princess Cruises will increase its capacity by 32 percent over the next six years, adding to its current fleet of 17 ships.

“The number of people enjoying cruise vacations has increased on average more than one million new cruisers every year over the last decade, an overall increase of more than 68 percent,” said Jan Swartz, Princess Cruises and Carnival Australia group president. “As we continue to grow our fleet with five new ships arriving by 2025, we’re proud to not only celebrate these three major construction milestones in the same day but also to continue to innovate our product with cutting-edge technology and elevated guest experiences that will be offered on all of these ships.”

In an industry-first event, three significant ship building construction milestones occurred in the same day, including:

• Steel-Cutting Ceremony for the final Royal Class ship
The steel-cutting ceremony for the sixth and final Royal-class ship, was broadcast live to the Fincantieri shipyard in Monfalcone from the builder’s yard in Naples, Italy. This ceremony marked the cutting of the first plates of steel to begin the building phase of the ship, which is scheduled to launch in 2022.

• Enchanted Princess Keel Laying Ceremony
Princess Cruises and Fincantieri executives started the countdown to the launch of Enchanted Princess as the keel – the bottom-most part of the ship – was ceremoniously lowered into position in the dry dock. Following a traditional blessing, the ship’s keel – which weighs approximately 500 tons – was lifted then lowered into position by a huge crane onto the keel blocks. Representatives and invited guests participated in a traditional coin ceremony, and for this occasion, welding an OceanMedallion into the ship believed to bring good luck to the vessel and all who sail on her.

• Sky Princess Madrina Celebration in Honor of the recent Sky Princess Float Out
Ms. Kerry Ann Wright, 2nd officer for Princess Cruises, nominated by her fellow crew members will serve as the Madrina recognizing her “Reach for the Sky” story and the career she is forging in the cruise industry. Sky Princess is nearing the final construction and interior outfitting phase before joining the fleet in October 2019.

Swartz added, “We couldn’t think of better day to mark these milestones than on Valentine’s Day, a day when we typically celebrate romance and our co-starring role on ‘The Love Boat.’ While we’ll always be known for love on the high seas, today also solidifies our position as the fastest growing premium cruise line in the world.”

All three 143,700-ton Royal-class ships carry 3,660 guests and will include the best of the stunning features found on Royal Princess, Regal Princess and Majestic Princess, as well as new offerings that represent an evolution of the current ships’ designs.

Sky Princess is scheduled to launch in the Mediterranean in October 2019, before debuting in North America in December 2019 marked with the traditional naming ceremony before sailing a season of Caribbean cruises roundtrip from Ft. Lauderdale.