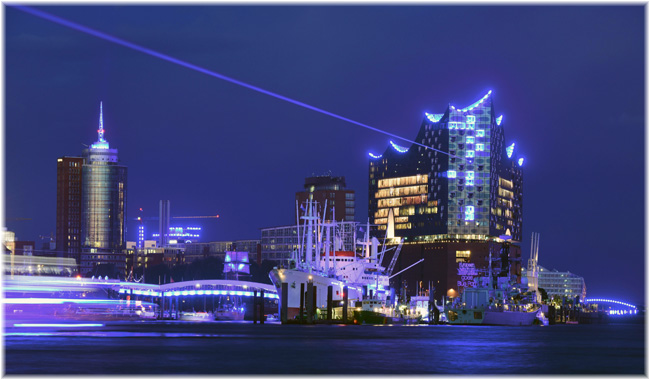 The port of Hamburg is once again living up to its reputation as the number one destination for maritime cruise entertainment. Taking place in mid-September, the Hamburg Cruise Days, the world´s largest public cruise festival, and, shortly prior to this, the Seatrade Europe trade fair will be the highlights of Hamburg’s 2019 cruise programme.

Leading up to these events, there will be many other opportunities for visiting Northern Germany’s cruise hotspot, either as a passenger or as a “ship spotter” – with events such as the traditional Hamburg Port Anniversary festival in May, a number of first arrivals as well as a spectacular ship launching ceremony.

Just as in previous years, Hamburg is currently presenting its cruise-related calendar of events at the International Tourism Exchange Berlin (ITB), the world`s leading travel trade show. At the Hamburg stand, the Hamburg Tourist Board has created a maritime home and a port of call for its eight shipping partners – AIDA Cruises, A-Rosa-Flussschiff, Costa Cruises, Cunard Line, MSC Cruises, Sea Cloud Cruises, Ponant Yacht Cruises & Expeditions as well as TUI Cruises, all of which will be showcasing their 2019 cruise highlights on-site the ITB.

The 2019 Hamburg Cruise Days will proudly present a new highlight on the opening day: a spectacular light and laser show that will be accompanied by pyrotechnic effects and enhanced by spherical sounds.
And on the night of 14 September, the popular Hamburg Cruise Days Parade will once again be taking place. Accompanied by 20 escort ships and a large fireworks display, five cruise ships will be making their way down the River Elbe this year.

Again in 2019, the ship parade will be illuminated within the context of the Blue Port Hamburg light installation, which will be launched one week prior to the Hamburg Cruise Days on 6 September. Between the Elbbrücken bridges and Oevelgönne, more than one hundred objects in Hamburg’s port will be illuminated by light artist Michael Batz as part of the project – including buildings, terminals, port vehicles, cranes, and ships.

Welcoming both the general public and industry experts, this will be the third time for Hamburg to synchronise its cruise-related events. Thus, immediately prior to the Hamburg Cruise Days, Hamburg will be hosting Seatrade Europe, the leading cruise industry fair in Europe (11–13 September). And as part of the Hamburg Cruise Days, the organisers will be introducing the “Business Deck”, a new industry forum, while at the same time providing impetus for the future of cruises. The high-calibre specialist workshop format, which sees itself as an inspiring international platform for industry-wide dialogue, will be first held on 13 September. Further information on the event is available at www.hamburgcruisedays.de.

Spectacular ship launching ceremony and several first arrivals
In 2019, Hamburg will once again provide the stage for a one-of a-kind ship launching ceremony: on 2 November, the MSC Grandiosa will be officially launched in the heart of Hamburg’s port. The event’s special guest will be Italian film diva Sophia Loren, who will serve as “godmother” for the latest addition to the fleet of MSC Cruises. What is more, the new cruise liner will be welcoming artists of Cirque du Soleil on board the ship.

Hamburg has long become one of Europe’s most popular cruise destinations, which is also confirmed by the large number of first arrivals scheduled for 2019. Nine cruise ships will be calling at the port of Hamburg for the very first time in 2019, including the new expedition ships Hanseatic Nature (date to be released) and Hanseatic Inspiration (4 October) of Hapag Lloyd, Costa Smeralda (20 October) of Costa Cruises as well as MSC Grandiosa (6 November) of MSC Cruises.

All ship arrivals for 2019 as well as additional cruise-related information can be found on the website www.hafen-hamburg.de/en/vessels/cruise-saillinglist.
With more than 223 calls and over 900,000 passengers in 2018, Hamburg broke all previous years’ records, while also affirming the city as Germany’s number one cruise port.

Hamburg Port Anniversary with windjammers and cruise giants
Prior to the Hamburg Cruise Days in September, there will be a number of consecutive cruise ship arrivals on the occasion of the Hamburg Port Anniversary festival this spring. Taking place from 10 to 12 May, the festival celebrates the port’s history of 830 years. Along the banks of the River Elbe, between HafenCity Hamburg, the St Pauli Landungsbrücken and the historic fish auction hall, the world’s biggest port festival offers an exciting maritime programme to more than one million guests. To learn more about the event, please visit www.hamburg.com/port-anniversary.