Port of Kiel expects more than 2.2 million passengers this year 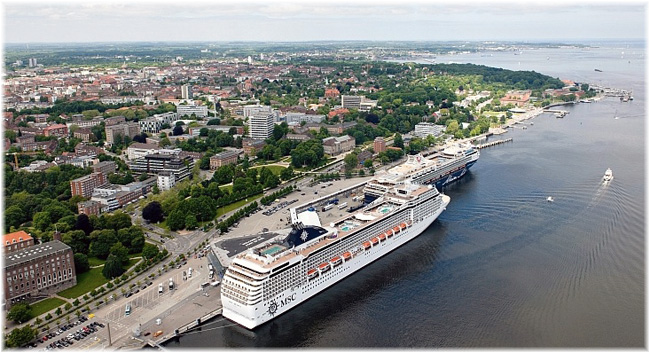 The economic importance of nautical tourism for Schleswig-Holstein is continuing to increase. More than 2.2 million passengers are expected in the port of Kiel alone this year, forecasting record numbers like 600,000 cruise passengers and 1.6 million ferry travellers.

Dr Dirk Claus, PORT OF KIEL Managing Director: “We are registering an ever growing interest in cruise holidays spent in Northern Europe. Our participation in the ITB trade fair emphasises our leading position as a cruise port on the German Baltic Sea coast serving as port of origin as well as destination.”

Last year, passengers generated a turnover of about 68 million Euros in Kiel. The consumer spending of the port’s ferry passengers amounts to more than 53 million Euros.

These are complemented by another 15 million Euros spent by cruise passengers and the crews. Out of the total amount, 10 million Euros were spent by passengers for hotel accommodation in Schleswig-Holstein directly before or after their cruise. In 2018, Kiel was visited on 169 separate occasions (143 in 2017) by 34 different cruise ships with a total gross tonnage of more than 11.5 million – an increase of 15.3 % over the previous year. 598,000 cruise passengers boarded or left a cruise ship at the different terminals, an increase of 16.5 %.

Dirk Claus: “We will surpass these cruise business results again this year. The highlights of Kiel’s upcoming cruise season will be the “Mein Schiff 2”, the “AIDAprima” and the “MSC Meraviglia”. To date 179 visits to Kiel by 33 different cruise ships have been registered. Total gross tonnage will increase to over 15 million and the number of passengers could reach 620,000.

The most frequent guests this season will be the ships of AIDA/Costa, TUI Cruises and MSC – with AIDA and TUI Cruises calling at the port with 4 different vessels each. The biggest cruise ship this year will be the “MSC Meraviglia” with 171,600 GT and offering 5,700 passenger beds. New visitors will also be the “Nieuw Statendam” of Holland America Line as well as “AIDAprima” which will be the first cruise ship to be supplied with eco-friendly LNG during its stay in port. The regular season will start on 31st March with a visit by the “Viking Sky” and will end mid-October.

In January, however, the latest newbuild of the Meyer Turku shipyard, the “Mein Schiff 2”, could already be seen in Kiel. It was handed over by the shipyard to the shipping company of TUI Cruises at the Ostseekai Terminal on 22nd January. The numerical peak of Kiel’s cruise season will be on 17th August as there will be – in addition to the ferries to Scandinavia – four ocean cruise vessels in port at the same time: the “AIDAprima“, the “AIDAluna“, the “Vasco da Gama“ und the “MSC Meraviglia“. Nearly 30,000 passengers will check in or out within a few hours that day.

With its cruise and ferry terminals called “Ostseekai”, “Norwegenkai” and “Schwedenkai”, Kiel has three modern terminals at its disposal that are located directly in the city centre. Furthermore, vessels can dock at the Cruise Berth No. 1 in Ostuferhafen. However, the PORT OF KIEL is constantly expanding its port facilities: At the Ostseekai, a second terminal building will be taken into operation in the course of this year’s season.

Dirk Claus: “Each berth at the Ostseekai will then have its own modern terminal building. So we can offer an optimum service for the passengers and we are adapting our capacities to the growing ship sizes.”

The port of Kiel is currently investing 9 million Euros in the new terminal building. The port is a well-known point of origin for cruises to the metropolises on the Baltic Sea and voyages along the Norwegian fjords but it has also made an excellent name for itself as a gateway to Northern Germany.

International guests arriving in Kiel with the ferries from Scandinavia or during their cruise itineraries, go on shore excursions throughout Schleswig-Holstein and to Hamburg. Through the daily ferry services, Kiel is connected to the Norwegian capital of Oslo (Color Line) as well as to Gothenburg (Stena Line) and Klaipeda (DFDS).