Vision Of The Seas Again Sailing From Galveston 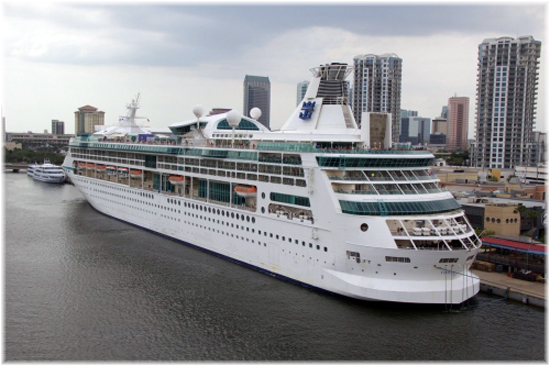 Royal Caribbean International’s Vision of the Seas once again began its home port seasonal sailing itinerary from the Port of Galveston with a 5 day Western Caribbean cruise on Monday.

“We are delighted to have Vision of the Seas back in Galveston even if for a short time. Her return of is good for the Island and the Port since it fortifies Royal Caribbean’s commitment to Galveston and the Texas and Midwest cruise market,” said Rodger Rees, CEO and Port Director. “We are also excited and looking forward to welcoming her sister ship, Enchantment of the Seas this upcoming May.”

The ship first joined the largest cruise ship in the state of Texas, Royal Caribbean International’s Liberty of the Seas, which has an overall length of 1,112 feet back in November of 2017. She sailed on thirty-five 4 and 5-day cruises to the Western Caribbean during the 2017/2018 winter season.

Vision of the Seas has an overall length of 915 feet and the Port anticipates an average of 2,150 passengers per cruise. Royal Caribbean International has scheduled eight 4 and 5-night cruises and one 7-night cruise during this spring cruise season.

On May 6, its 989-foot sister ship Enchantment of the Seas will reposition from Port Canaveral to join Liberty of the Seas , offering four- and five-night cruises that will complement Liberty of the Seas seven-night Caribbean vacations. These cruises will include ports of call in Cozumel, Puerto Costa Maya, and the Yucatan. These 51 cruises will result in an estimated 120,000 additional passengers leaving on cruises from Galveston during the 2019 cruise season.