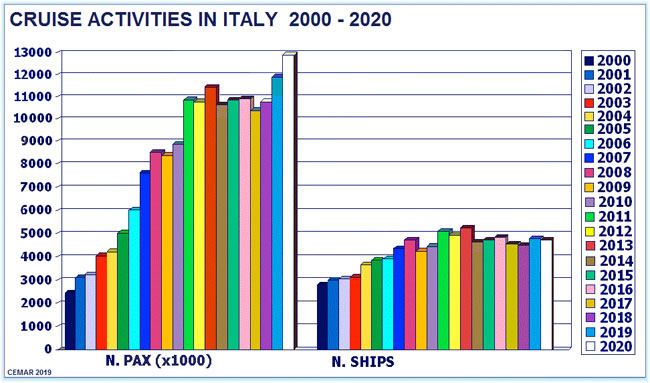 Cruises in Italy are starting to grow again, finally aligning with the international trend. This is the message of Sergio Senesi, President of Cemar Agency Network in Genoa, who presented – in the context of the current Seatrade Cruise Global at Miami – the 2019 and 2020 forecasts for the cruise sector at Italian ports yesterday afternoon, April 7th, 2019.

“Cruises are again growing strongly In Italy. This is indicated by the forecasts for 2019, with + 7.13% in terms of passenger handling” – declared Sergio Senesi – “But the 2020 forecasts indicate this most of all with an additional + 7.88%. I believe that such a positive result is mainly due to the new units that are becoming part of all the most important fleets of cruising ship.”

Sergio Senesi has also announced the ranking of the Cruising Groups, again with reference to the forecast of passengers handled at Italian ports and the subdivision of the passengers and calls forecasted for each individual region.

Liguria is confirmed as first classified, as well as being the region where 83% of the agencies that manage ships’ calls at all Italian ports are concentrated.

“The positive forecasts for the two-year period 2019-2020 must not lead us to lower our guard. Italy is in fact the first cruise destination in the Mediterranean, and thanks to the upcoming new ships being delivered during these two years, increasingly more “green” ships, there will be further space for growth.
The Venice unknown remains, which to date has not been resolved and which creates strong doubts about future planning for the entire Adriatic Sea”
, concluded Sergio Senesi.

CEMAR AGENCY NETWORK CRUSING DIVISION is active in this field for over 35 years. Established as a company dedicated to the assistance of large yachts, Cemar today is specialized in assistance to cruise ships and represents some of the main shipping companies in the world in Italy.