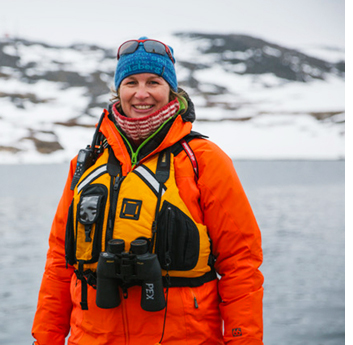 Promoted to the new position of director of expedition operations/human resources, Anja Erdmann will assume many of the duties related to staffing Poseidon’s vessels with top-notch expedition staff and guest lecturers, finding and training new talent, as well as team scheduling, and contractual issues.

She will also continue in her role as company representative to both AECO (Association of Arctic Expedition Cruise Operators) and IAATO (International Association of Antarctica Tour Operators).

Erdmann came to Poseidon in 2015 from Hurtigruten, where she had served as a project manager and expedition leader since 2006. She has a degree in tourism management from Harz University of Applied Studies and Research in Wernigerode, Germany. She is based near Berlin, Germany.

“Anja has been a super addition to Poseidon, juggling diverse responsibilities and projects, as well as itinerary planning, permit and authorization management, and expedition leading aboard the 114-passenger Sea Spirit,” said Senior Vice President Jan Bryde. “It’s a well-deserved promotion, and I look forward to working closely with Anja on the many challenging polar field issues as the expedition cruise segment continues to gather momentum.”

Jennifer Kunath brings 30 years of experience with adventure travel specialists to Poseidon, working for 20 years as a program manager and director of sales for International Expeditions, Inc.

In 2007, she joined Safari Legacy, Inc., a destination management safari outfitter based in Tanzania, opening the US office for the company and wearing many hats as director of sales, marketing account management and business development. She is a graduate of international studies from the University of Montevallo in Alabama, and will be based in Birmingham AL.

“We are pleased to find someone of the caliber of Jennifer, with her extensive background in adventure and expedition-style travel worldwide,” said Steve Wellmeier, managing director of Poseidon Expeditions USA. “From a sales perspective, she understands how the travel industry intersects with wildlife conservation and stewardship of the environment, and that’s the same whether it’s the plains of eastern Africa or the icy terrain of the Arctic and Antarctica.”