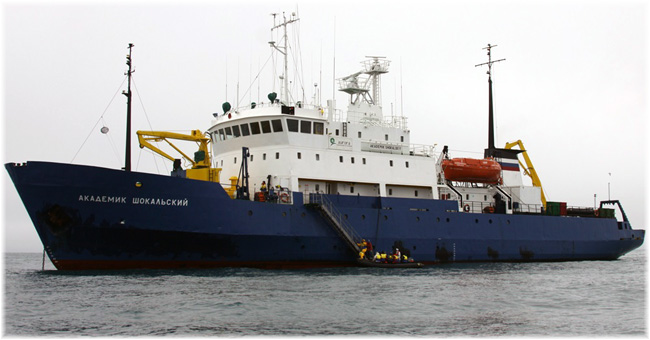 Heritage Expeditions General Manager David Bowen said the return of Akademik Shokalskiy to the fleet is excellent news for guests who missed out on the company’s sold out Ross Sea and Macquarie Island voyages.

“As one of the few remaining companies still offering true, small ship exploration our voyages tend to fill quickly, often 12 months and more in advance,” said Mr Bowen. “By bringing Akademik Shokalskiy back we are able to alleviate the disappointment of these guests who missed out on getting down to the ice and the Subantarctic Islands of New Zealand and Australia this season, as well as introduce an exciting new East Antarctic expedition.”

The additional voyages include 30-day Ross Sea adventure ‘In the Wake of Scott & Shackleton’, 13-day Australia and New Zealand Subantarctic Islands explorer ‘Galapagos of the Southern Ocean’ and all new 25-day East Antarctic odyssey ‘In the Wake of Mawson’ to Commonwealth Bay.

In the Wake of Scott & Shackleton 8 January – 6 February 2020
Zodiac cruise colossal ice shelves, walk on the ice with Emperor Penguins, visit research stations and venture to the historic huts of Shackleton and Scott on this 30-day voyage into the heart of Antarctica.

Galapagos of the Southern Ocean 3 – 15 December 2019
Journey through the spectacular wildlife haven of Australia’s Macquarie Island and the UNESCO World Heritage Sites of New Zealand’s Subantarctic Islands on this expedition into the Southern Ocean.

In the Wake of Mawson 15 December 2019 – 8 January 2020
Follow in the footsteps of Sir Douglas Mawson exploring the penguin colonies and gigantic ice shelves of Commonwealth Bay from Mertz Glacier to Cape Denison/Mawson’s Hut and Dumont d’Urville.

About Akademik Shokalskiy
Built in 1984 for polar and oceanographic research, Akademik Shokalskiy is fully ice strengthened and famously joined a Russian convoy of the Northeast Passage in the late 1980s, as well as completing the journey unassisted. This class of vessel is world-renowned for Polar expedition cruising because of its strength, manoeuvrability and small passenger numbers.

Comfortably accommodating up to 50 guests in well-appointed comfortable cabins and suites all with outside windows or portholes and ample storage, Akademik Shokalskiy’s common areas include large open decks, two dining rooms, a digitally-equipped lecture room, sauna, fully-stocked library, lounge and bar with 24-hour access to complimentary tea, coffee and biscuits.

As with all Heritage Expeditions’ voyages, guests will journey alongside a team of world renowned naturalists, botanists, historians and experts able to interpret the natural and human history discovered during their voyage, as well as hosting regular lectures, presentations and opportunities for experiential learning.

Similarly, voyagers aboard Akademik Shokalskiy will enjoy Heritage Expeditions signature, delicious cuisine from their professional chefs alongside a premium beverage selection with guests able to enjoy exceptional views from the bridge alongside the Captain, via an open bridge policy, deck and various viewing areas. A fleet of 5 Zodiacs manned by an experienced expedition team ensures maximum time for ice exploration.