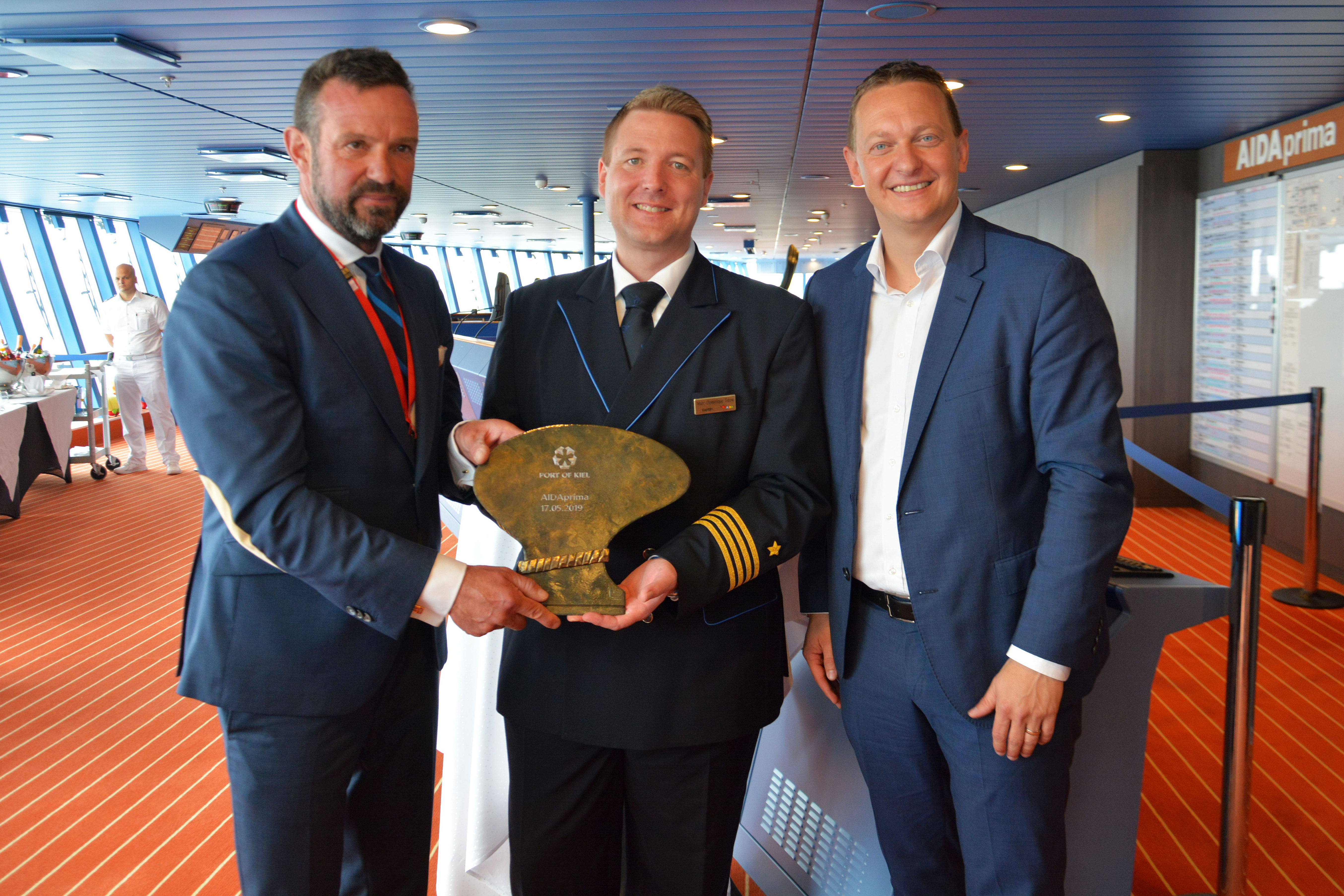 Maiden call of the cruise ship “AIDAprima” at the port of Kiel. Coming from Dubai, the vessel concluded its transfer voyage and berthed at the Ostseekai Terminal in the early Friday morning.

At the on-board reception, the PORT OF KIEL’s Managing Director, Dr. Dirk Claus, welcomed the President of AIDA Cruises, Felix Eichhorn, as well as Captain Marc-Dominique Tidow in Kiel and presented them with the official plaque for the vessel’s inaugural call.

Dirk Claus: “We are pleased that AIDA Cruises also bases a ship of the Hyperion Class in Kiel for the summer season. Hence we are continuing to strengthen the sound partnership between the shipping company and the port.”

Starting next year, AIDA Cruises will also be the port’s first customer to be supplied with on-shore power at the Ostseekai Terminal. Dirk Claus: “In doing so, AIDA Cruises and the PORT OF KIEL significantly contribute to the climate protection in Kiel. We will start constructions of the shore power station this summer so that we can take the plant into operation for the season 2020.” With a total of 60 calls by four different vessels („AIDAprima“, „AIDAbella“, „AIDAluna“ and “AIDAcara“) the shipping company of AIDA offers the most cruises starting from Kiel this year.”

Following tradition, the vessel’s first departure from Kiel will be accompanied by the water fountains of a harbour tug as from about 6 p.m.. The “AIDAprima” measures 125,500 GT and disposes of about 1,600 passenger cabins. It will start 23 voyages from Kiel this season and will therefore be the most frequent guest on the fjord. These cruises throughout Northern Europe take the ship to the metropolises on the Baltic Sea – the ports of call are among others Tallinn, St Petersburg, Helsinki and Nynäshamn near Stockholm – as well as along the Norwegian coast with shore excursions e.g. in Nordfjordeid, Alesund, Bergen and Eidfjord. During the Kiel Week, which is the largest maritime sailing event in the north, the “AIDAprima” can be spotted twice on the fjord of Kiel, namely on June 22nd and 29th. The “AIDAprima” will finish its season in Northern Europe on October 12 and will head for the Mediterranean Sea.

AIDA Cruises and the PORT OF KIEL are connected by a long-time and trustful partnership. The first vessel of the AIDA fleet, which is called „AIDAcara“ by now, visited the capital city of Schleswig-Holstein on its very first voyage on 8th June 1996. Since then, AIDA has been a reliable economic factor for the touristic sector and the maritime industry of the region. According to recent studies, the ferry and cruise passengers generated a turnover of about 68 million Euros in Kiel in 2017 already. The voyagers booked more than 100,000 hotel nights before or after their cruise.

Next to the economic importance of the partnership between Kiel and AIDA Cruises, the two players have a strong emotional bond. In April 2007, it was the “AIDAdiva” which inaugurated the Ostseekai Cruise Terminal. The ship’s christening of the “AIDAsol” on 9th April 2011 is also unforgettable. More than 45,000 citizens and guests of the city celebrated the eighth AIDA vessel. Next year again, four different AIDA vessels will pay their visits to the port of Kiel.