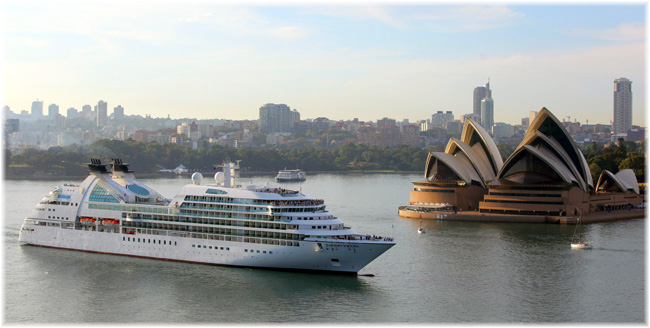 Seabourn will be dazzling guests with a jam-packed entertainment schedule planned for its 146-day World Cruise: Extraordinary Destinations aboard Seabourn Sojourn.

Set to depart Miami on January 4, 2020, and end in San Francisco on May 28, the voyage will delight travelers by making 62 ports of call, along with a range of musical productions, deck parties, and onboard enrichment programming designed to excite every passion and satisfy every taste.

Seabourn’s first World Cruise in six years will offer a wide variety of production shows produced by Belinda King Creative Productions, performed by a rotating cast showcasing their talent throughout the voyage.

The productions include “An Evening with Tim Rice,” a concert-style presentation celebrating the acclaimed English musical theatre lyricist whose work from Jesus Christ Superstar to The Lion King has earned him a place in an exclusive group earning an EGOT; three Oscars, three Tony’s, three Golden Globes and several Grammys over the course of his career.

“As the saying goes, ‘all the world’s a stage,’ and Seabourn is going to be taking the stage to sea with a world-class lineup of musical performances, celebrations, and engaging programming for guests to enjoy throughout our World Cruise,” said Chris Austin, Seabourn’s senior vice president of Global Marketing & Sales. “It’s one of many reasons why guests should select Seabourn Sojourn for their 2020 World Cruise.”

Ruthie Henshall & Norm Lewis – Gala Event – Seabourn guests booked for the full 146-day World Cruise will head off in style with a Gala Bon Voyage Dinner in Miami the night before departure, featuring Ruthie Henshall and Norm Lewis. Henshall, a multi-award-winning star of stage, screen and concert hall, has appeared in many of the most popular musicals of the past 30 years from Cats to Crazy for You to Chicago. Lewis, who has delighted audiences with his acting and baritone for decades, recently appeared in Jesus Christ Superstar Live in Concert on NBC. Gala Bon Voyage Dinner January 3; Henshall to return for performances onboard January 4-9; Lewis to return for performances onboard February 19-25.

Charl du Plessis Trio – Among the most versatile and respected crossover ensembles in Africa, the Charl du Plessis Trio is led by South African Steinway Artist Plessis on piano, with Werner Spies on bass and Hugo Radyn on drums. Their diverse repertoire ranges from Baroque, Latin and Swing to Classical and Funk. Scheduled February 4-12.

Soweto String Quartet – Fresh, vibrant, funky, and not at all what one would expect from a string quartet, SSQ was a favorite of former South African President Nelson Mandela. Making music with panache, enthusiasm and lots of smiles is Music Director Sadile Khemese on first violin, Thami Khemese on second violin, Makhosini Mnguni on viola, and Reuben Khemese on cello. Scheduled February 12-16.

Wouter Kellerman and His Band – Globetrotting flutist, composer and crossover artist Kellerman thrives on experimenting with the shades, textures and colors produced by his instrument. He followed his 2015 Grammy Award for Winds of Samsara (with Indian composer and producer Ricky Kej) by debuting his album Love Language at #1 on the World Music Billboard charts. Scheduled March 6-11.

Lea Salonga – With her powerful voice and astonishing pitch, Salonga has landed some of the biggest musical roles in theatre, including the original Kim in Miss Saigon, for which she won a Tony, the Olivier, Theatre World and other various awards. Salonga’s electrifying 2017 live album Blurred Lines was recorded during a sold-out run at Feinstein’s/54Below, to which she returned with a record-setting 15-show encore performance to end her 2017 North American tour. Scheduled March 25-29.

Rhonda Burchmore – Rhonda Burchmore has dazzled crowds at the Sydney Opera house and beyond with her bold voice and contagious smile. Burchmore has forged a three-decade career in show biz performing from London’s West End to the Melbourne Theatre Company in the highly acclaimed The Drowsy Chaperone. Scheduled May 3-11.

Rita Rudner – Get ready for an evening to remember with Rudner, who since making her dancing debut on Broadway at age 15 has appeared in several musicals, late-night television shows, her own solo HBO special, and the longest-running solo comedy show in the history of Las Vegas. Scheduled May 20-27.

The World Cruise will play off the various regions on its itinerary to treat guests to themed deck parties with local entertainers boarding Seabourn Sojourn to ‘Celebrate Africa,’ ‘Celebrate Asia,’ ‘Celebrate Polynesia’ and more.

There will also be a host of smaller deck parties, such as ‘Farewell USA’ out of Miami, ‘Opera Under the Stars’ with Venetian masks for everyone, and a ‘Roaring ‘20s Speakeasy’ party with creative cocktails celebrating the days of drinks of the sly gone by.

The World Cruise will further feature themed dinners at The Colonnade, performances by local entertainers, exhibits by artists-in-residence, and the always-popular Seabourn Conversations onboard enrichment program with distinguished speakers invited to illuminate guests on a wide array of topics from politics to culture, and adventure to the arts.