Cuba Loses The US Passenger Trade (Again) – Other Cruise News: Norwegian’s New Base In Amsterdam – Second “Infinity” X-Bow For Aurora

Recent surprise news is that the US has banned all cruise ships sailing from US ports from entering Cuba, effective immediately last week. Elsewhere, Norwegian Cruise Line has decided to base its Norwegian Pearl in Amsterdam. And Aurora Expeditions has ordered a second X-Bow expedition ship.

All US cruise ship travel to Cuba has been banned by the Trump administration because the Cuban administration has been undermining US foreign policy by backing US adversaries in Venezuela and Nicaragua.

US cruise companies were given the go-ahead to start sailing to Cuba in May 2016 by the Obama administration and major cruise lines such as Carnival, Norwegian and Royal Caribbean quickly opened up routes that became very popular.

The mania problem was Cuba’s outdated ports didn’t have enough room for all the US ships. In May, Cuba said more than 140,000 US citizens had already visited the island in 2019 aboard cruise ships.

“We are disappointed that cruise lines will no longer be operating to Cuba,” said Adam Goldstein, chairman of the Cruise Lines International Association (CLIA).

“While out of our control, we are genuinely sorry for all cruise line guests who were looking forward to their previously booked itineraries to Cuba.”

Carnival Corp & plc. the parent company of Carnival Cruise Line, Holland America and Seabourn, confirmed on Wednesday that the group is no longer allowed to sail to Cuba.

Currently, Carnival Corp & plc is sailing to Cuba on Carnival Cruise Line and Holland America Line, and Seabourn had been scheduled to begin sailing in November to Cuba.

Royal Caribbean announced Wednesday that 2019 sailings with Cuban ports of call on the 2,380-berth Majesty of the Seas and Empress of the Seas will call on alternative ports in the Caribbean. Cruise guests will be permitted to cancel current bookings for a full refund, or maintain their bookings with a new itinerary and receive a 50% refund.

Norwegian Cruise Line said in a statement Tuesday that the company is “closely monitoring these recent developments and any resulting impact to cruising to Cuba.”

In May 2016, following the Obama administration’s decision to ease travel restrictions on Cuba, the 710-berth Carnival vessel Adonia became the first US-based cruise ship to sail into Havana in several decades.

Most cruise lines are providing compensation to passengers whose travel itinerary will have to be changed last minute due to the new regulations. 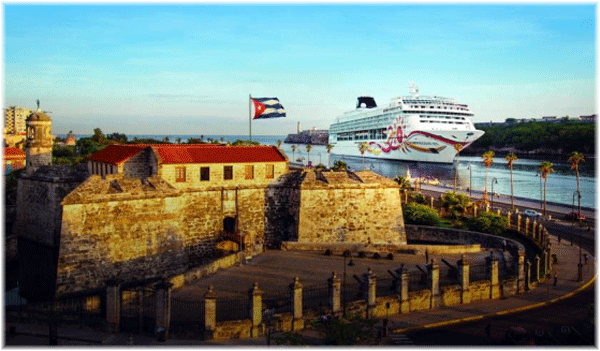 The Cruise Lines International Association says the policy affects an estimated 800,000 who travel to Cuba on cruise ships each year.

A 2018 CLIA study reported that 43% of travel agents said their customers were increasingly interested in Cuba, mostly because it’s seen as a “new, exotic and mysterious” destination.

Norwegian’s New Base In Amsterdam

Norwegian Cruise Line has marked its first-ever season of cruises from the Netherlands with the European debut of Norwegian Pearl, bringing the line’s presence to six ships in the region for the first time.

On Saturday, June 8, Norwegian Pearl’s Captain, Paul von Knorring, and the ship’s officers were honoured with a plaque and key to the city of Amsterdam from local officials from the Port of Amsterdam, Amsterdam Cruise Port and Passenger Terminal Amsterdam.

On May 11, the 2,400-berth Norwegian Pearl embarked on her first summer season in Europe, where she became the largest ship to sail the Thames River to Tilbury.

“As the only North American cruise line to sail Europe year-round, we are very excited to offer guests new and interesting itineraries full of history, culture and diverse landscapes while they enjoy our various ships in the region, including Norwegian Pearl, which is home porting in Europe for the first time,” said Andy Stuart, president and chief executive officer of Norwegian Cruise Line.

“We were very pleased to welcome Norwegian Pearl as her new home port for the 2019 summer season,” said Alma Prins, Commercial Manager Cruise at Port of Amsterdam.

“Amsterdam is uniquely positioned in the heart of Western Europe, offering international guests the opportunity to combine a cruise with a land-based discovery of the Old Continent and its many treasures.”

Aurora Expeditions will add a second purpose-built expedition ship to explore Antarctica in autumn 2021.
A sister-ship to the soon-to-be launched Greg Mortimer, she will be built in China for Miami-based specialist expedition ship owners SunStone Ships.

She will be similar in design, with X-Bow technology developed by Norwegian designer Ulstein. The inverted bow concept enables gentler sea crossings and reduced emissions.

Robert Halfpenny, managing director of Aurora Expeditions, said: “Sales for our polar voyages have been phenomenal with a virtually sold-out upcoming Antarctic 2019-20 season.
“In excess of 60% of the inventory has already been sold for Antarctica 2020/21 and with the second ship, we are now able to ensure that the demand for places is met without causing disappointment to those who have not been able to join us during Greg Mortimer’s inaugural season.”

The second ship will sail from Ushuaia in the autumn of 2021 before heading south for the 2021-22 Antarctic season.