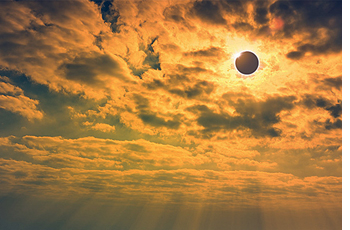 On the morning of Dec. 4, 2021, passengers and crew aboard the M/v Sea Spirit, Poseidon Expeditions’ 114-guest polar expedition ship, will be on deck as a solar eclipse plummets Antarctica into sudden darkness.

This event occurs on Day 14 of a 23-day voyage that departs the world’s southernmost city, Ushuaia, Argentina, on Nov. 20 and returns there on Dec. 12 after firmly fixing in memory place names from history books – South Georgia, the Falkland Islands and the Antarctic Peninsula itself. The per person rates are from $16,556 (triple occupancy) and $21,866 (double occupancy).

The complexities of the world’s oceans are also a focus of the itinerary Solar Eclipse in Antarctica as Sea Spirit moves south through Drake’s Passage and crosses what’s known as the Antarctic Convergence, a biological ring around Antarctica marking where warmer sub Antarctic waters meet the colder waters of the Antarctic flowing north.

From this convergence into waters that become the Scotia Sea, and surrounded by the miracle that is the marine life of South Georgia, the captain will navigate Sea Spirit precisely onto the narrow path of totality, the relatively small area from which one can see the sun’s light become totally obscured by the moon, at the precise time of the predicted solar eclipse.

“Our goal is to meet the center of the moon’s shadow as it moves swiftly across the Scotia Sea during its rare and brief appearance in Antarctica. This may well bring the ship within sight of the Weddell Sea pack ice, adding a great polar ambiance to this amazing celestial event. With the advantage of sophisticated charts and meteorological forecasts — and a little luck — we will gather on deck in the early morning of Friday, Dec. 4, under hopefully clear skies, to observe a total eclipse of the Antarctic sun in the most pristine wilderness on Earth,” said Nikolay Saveliev, president of Poseidon Expeditions.

The eclipse will be viewed near the islands of South Georgia, a scenic wilderness and an unrivaled paradise for sub-Antarctic wildlife viewing. The islands are said to host upwards of 100 million seabirds, including numerous species of albatross, penguins, prions, petrels and terns. On beaches such as those at Salisbury Plain and St. Andrews Bay, over 100,000 elephant seals and three million fur seals jostle for space among innumerable stately king and sprightly macaroni penguins. An increasing number of whales are in surrounding waters.

The exploration of South Georgia comes after transiting the Beagle Channel and passing the islands of Tierra del Fuego with a lookout for dolphins and whales enroute to the Falkland Islands, a birders’ paradise. Think colonies of penguins and albatross and Peale’s and Commerson’s dolphins, fur and elephant seals.

For some passengers the eclipse will be the expedition’s highlight. However, the ongoing adventure into the Antarctic Peninsula region may leave others in awe over some of the world’s most impressive scenery, including icebergs of every size and description, and Antarctica’s best wildlife viewing. Waters rich with krill are home to a variety of whale and seal species. Penguins form large nesting colonies on land.

The South Shetland Islands, the northernmost islands in Antarctica, afford numerous landing sites with abundant wildlife and historical significance. Among them is Elephant Island, where men from Shackleton’s famous Endurance expedition spent the winter.
Farther south, on the Antarctic Peninsula, the gorgeous Gerlache Strait area contains sheltered bays, accessible wildlife and stunning scenery. The famous Lemaire Channel is also known as “Kodak Gap” because of the photogenic way the mountainous sides of the narrow channel are reflected in calm, iceberg-strewn waters.

Complementing the strong credentials of Poseidon’s team of marine biology, history, geology and ornithology specialists will be Paul M. Sutter, astrophysicist, author, speaker, producer and on-air host. He studies the earliest moments of the Big Bang, the emptiest places in the universe, and novel methods for detecting the first stars. His first book, Your Place in the Universe; Understanding Our Big, Messy Existence, was published by Prometheus Books in 2018. He is the author of over 50 articles on astrophysics and serves as Chief Scientist of the Center of Science and Industry in Columbus, Ohio.