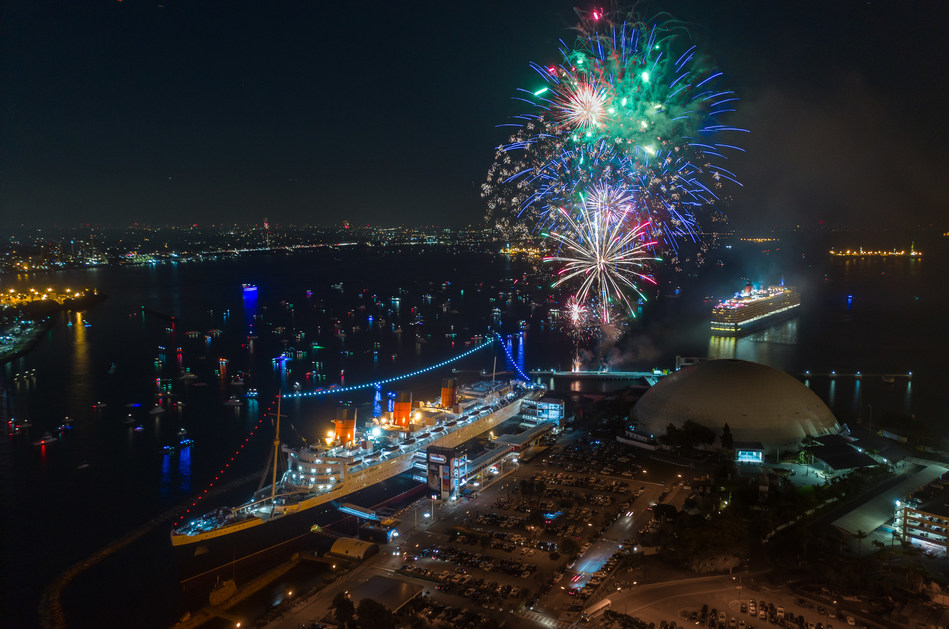 During this rare visit, Queen Elizabeth’s Captain Inger Thorhauge offered a ‘salute’ to the historic Queen Mary by sounding her horn, and guests on both vessels were treated to a spectacular firework show that evening.

On July 5, ‘The Cunard Story’ on The Queen Mary was officially dedicated. Captain Thorhauge joined Everette Hoard, Commodore of The Queen Mary, Collette Weston, Deputy Consul General of the British Consulate Los Angeles, and John Jenkins, General Manager, The Queen Mary, for the ribbon-cutting to launch this new exhibition.

‘The Cunard Story’ on the Queen Mary tells the evolution of the line’s remarkable 179-year history and illustrates the legacy of a brand responsible for many innovations seen today in modern day cruising.

‘The Cunard Story,’ a permanent exhibition, showcases the company’s legacy through artifacts, photographs and film, and also features an Immigration Salon allowing visitors to explore the Ellis Island database to learn about the arrival and ships that carried their ancestors to America. Approximately one in five immigrants came through Ellis Island on a Cunard ship at the height of the immigration period during the latter part of the 19th century and early 20th century.

The 2,081-passenger Queen Elizabeth had sailed down from her first season in Alaska and spent an overnight in the Port of Los Angeles on July 4, setting sail south to Mexico on July 5. The ship will transit the Panama Canal, call in New York City, and arrive in Halifax, NS on July 26 to meet her other sister ship, Queen Mary 2, for a celebration in the company’s ancestral home.