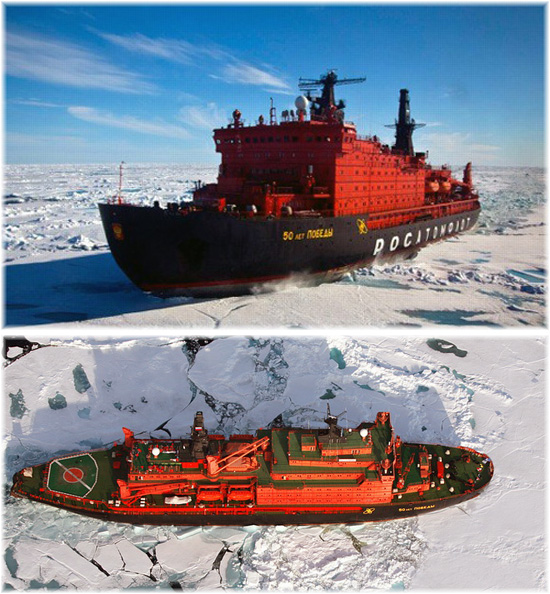 This week as Poseidon Expeditions commences another sold-out season of voyages from Murmansk, Russia aboard the nuclear-powered icebreaker 50 Years of Victory, to the geographic North Pole, the company announces that reservations are now open for three departures during the summer of 2020.

“Since our first voyage in 2001, we’ve had the great pleasure of providing more than 4,300 guests from all over the globe the singular opportunity to stand on top of the North Pole,” said Nikolay Saveliev, president of Poseidon Expeditions. “That’s 42 departures to-date that we’ve operated through the summer of 2018, with 2019 the 12th consecutive season aboard the world’s most powerful icebreaker, the nuclear-powered 50 Years of Victory.” (Before 2008, North Pole programs were operated aboard the similar Arktika-class Yamal.)

Poseidon Expeditions plans to operate three trips to 90º north latitude at the height of the 2020 summer season: July 12, July 23 and Aug. 3.

The 13-day program includes a full day of activities on the ice at the North Pole, plus Zodiac landings on Franz Josef Land, an infrequently visited region of 192 islands rich in polar wildlife and stark landscapes in the Russian High Arctic. Rates for the 2020 season – including the early booking savings that are in effect through Oct. 31, 2019 – range from US$29,445 per person for Standard Stateroom to US$42,840 for the 33-square-meter Arktika Suite.

“Human experience as well as the right vessel for the task both play an all-important role in making such a trip successful. So we are pleased that Captain Dmitriy Lobusov will again be at the helm of 50 Years of Victory for the 2019 season,” continued Saveliev.

“Captain Lobusov has worked in the Arctic ice for more than 30 years and participated in North Pole trips for a quarter century, serving as master for more than 100 of them. The technical management of a 23,439-GT vessel, which can break ice up to three meters in thickness, is considerably more than following a compass heading to 90º north latitude through the frozen Arctic Ocean. Significant pressure ridges along the way can pose challenges, even for a ship with 75,000 horsepower and two OK-900A nuclear reactors and a pair of robust steam turbo-generators,” said Saveliev.

Leading the team will be Huw Lewis-Jones, historian, author and former curator of art at the Scott Polar Research Institute, University of Cambridge. He is an authority on Arctic and Antarctic exploration, portraiture, print culture and the history of photography in the polar regions.

If living the adventure of travel to the North Pole itself isn’t enough, guests on the July 29, 2019, departure will enjoy learning about the exploits of Guest Lecturer Fyodor Konyukhov, internationally known aerial and marine explorer, mountaineer and artist. He is the first Russian climber to have completed the Seven Summits, conquering the highest mountains on each of the seven continents. He completed a solo circumnavigation of Antarctica in 102 days by sailboat in 2008, crossed the Atlantic Ocean in a row boat in 46 days and the Pacific Ocean by row boat in just 162 days. And in 2016, he became only the second person to circumnavigate the world in a balloon.

In addition to the regular program of enrichment, guests during the 2019 and 2020 seasons will enjoy Zodiac cruises ashore in Franz Josef Land and other special events and activities at the North Pole and in transit. The program includes one night pre-cruise hotel accommodations in Murmansk, and all transfers to/from the airport and ship.

The 525-foot 50 Years of Victory carries 128 passengers in comfortable accommodations, all with exterior views. Public spaces include a dining room; aft salon for lectures, presentations and socializing; a bow-facing bar and lounge; library and lounge; plus a gym, two saunas and swimming pool with heated seawater. The ship has a clinic, a physician and a massage therapist.