Maiden call by Marella Cruises at the Port of Kiel 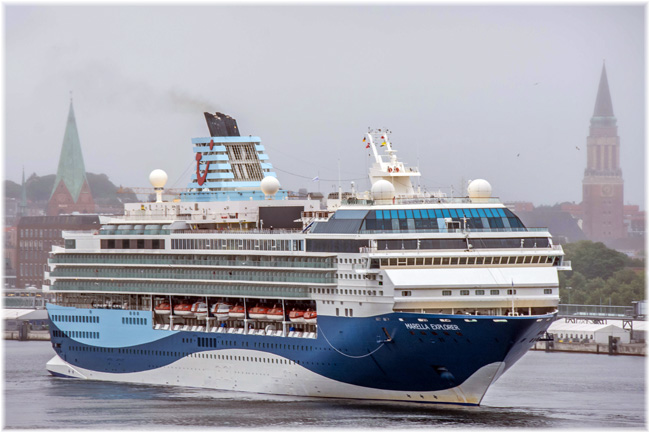 In the early Tuesday morning (16th July) the cruise ship “Marella Explorer” berthed in the port of Kiel with 2,000 mostly anglo-phone passengers on-board. The vessel follows an itinerary of 14 days leading it all across the Baltic Sea.

It started in Newcastle on 13th July and will conclude its cruise in the same port on 27th July. On the occasion of its maiden call, the Lord Mayor of Kiel, Dr Ulf Kämpfer, welcomed Captain John Spencer Clark to the State Capital City of Schleswig-Holstein and presented him with the traditional inaugural plaque.

“Kiel has a lot to offer to its guests and it is a gateway for excursions throughout Schleswig-Holstein and to Hamburg. We are happy to be part of Ma-rella Cruises’ itinerary planning today as well as next year”, Lord Mayor Kämpfer told the Captain. The “Marella Explorer” will be accompanied by the water fountains of a harbour tug when it leaves the Ostseekai Terminal again at about 5 p.m. heading for Tallinn. Further destina-tions will then be St Petersburg, Helsinki and Stockholm.

The passengers can choose from a diverse portfolio of shore excursions during their stay. The options range from guided city tours in Kiel over panoramic trips to Holstein Switzerland to excursions to the seaside resort of Laboe. Other tours go to the Hanseatic city of Lübeck or the metropolis of Hamburg.

Dirk Claus, Managing Director at the PORT OF KIEL, said: “Schleswig-Holstein becomes more and more renowned among international shipping companies as a touristic destination. This year we expect 20 calls during ongoing cruises and we also count a remarkable number of par-tial passenger turnaround calls.”

As the Ostseekai Terminal is located directly in the city cen-tre, the guests can also discover Kiel on their own. In the mere or partial stop-over sector, Kiel will be visited this year by the shipping companies of Azamara Club Cruises, Cunard Line, Fred. Olsen, Marella Cruises, MSC, Saga Cruises, Holland-America-Line and Viking Ocean Cruises.

The „Marella Explorer“ (tonnage: 77,000 GT, length: 264 m, 1,925 passengers) was built at the shipyard „Meyer Werft“ in Papenburg for Celebrity Cruises (Chandris) in 1996. It was passed on within the Royal Caribbean Group to TUI Cruises in 2009, which is a joint venture between Royal Caribbean and the TUI AG. Back then, it was called “Mein Schiff” and could be spotted in Kiel already on 18th May 2009.