This week we have salad bowl of stories. Reports say that Star Clippers may be avoiding the French coast as part of their dispute over “their” latest cruise ship, the Flying Clipper. Meanwhile, the new ship operated her first cruise carrying Ultra Europe group passengers under the flag of her builders, Brodosplit. We also examine the first half dozen “Infinity” class expedition ships and survey some new names in the field of cruising.

It is being reported on Internet forums that Star Clippers has cancelled calls of their ships in France out of fears that lawyers acting on behalf of Brodosplit Shipyard, the builders of the new 300-berth Flying Clipper will seek to have the ships arrested for non-payment of the contract.

Meanwhile, Brodosplit has released photos of the Flying Clipper, her completed interior, staterooms and public areas, and the shipyard operated her on a short cruise to Croatian ports in July.

The ship, built at an estimated cost of $100 million, is said to be the not only the largest but also the most advanced sailing vessel in the world.

In June, Cruise Industry News reported that her delivery to Star Clippers was “running late,” but the vessel has now been completed – although not delivered.

“We’re not releasing any planned itineraries for Flying Clipper yet as it has been subject to delays at the shipyard,” Star Clippers said at the time. “We still hope to take delivery during 2019, however, discussions are ongoing with the shipyard and we will advise (on an updated) launch date when known.”

The yard cited the complex build of the ship as one of the reasons, as the vessel is the first sail ship in the world built to comply with Safe Return to Port.

“It has been extremely complicated to build that type of ship, however, Brodosplit will be completing it soon,” Brodosplit said.

Separate news sources said that Star Clippers had cancelled its contract with the yard earlier this year. A number of foreign shipowners have also cancelled orders for ships being built in Croatia in recent times, but most of these were over at the troubled Uljanik yard.

Brodosplit is also building two expedition ships, the Hondius, delivered to Oceanwide Expeditions in May, and a follow-on to be named Jansonnius. A third expedition ship, Quark Expeditions’ Ultramarine, had her keel laid earlier this month.

The seventh vessel, ordered on May 29, will be for long-term charter to an unnamed operator. With dimensions of 441 x 59 feet, room has been made in the schedule for delivery in September 2021. The vessels have been commissioned from China Merchants Heavy Industries. Are all Polar Code 6.

The Greg Mortimer underwent sea trials in July and is due to be named in September, after which she will be delivered to Aurora Expeditions. While the Greg Mortimer will accommodate 120 passengers, others in the class will be able to accommodate up to 200. 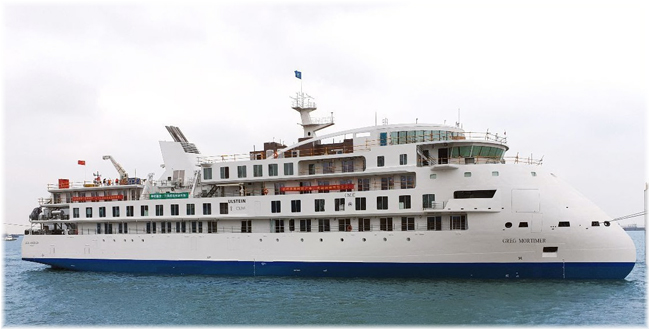 A major feature of the new ship is the patented inverted bow called the X-Bow will provide more stability in rough seas than traditional designs. The X-Bow will allow the ship to pierce through choppy waves, like those in the Drake Passage, with unprecedented ease and speed, while also reducing fuel consumption and emissions.

The Greg Mortimer will be based in Ushuaia to cruise Antarctica, the Falklands and South Georgia, beginning with the 2019/20 season. The vessel will then cruise the Arctic in the summertime.

Word has now been received that P&O’s Oriana will be renamed Piano Land when she begins cruise service in China. Her operator will be Well Star Travel, a joint venture of China Travel Service and Cosco.

The names announced for the four new Havila coastal ships for Norway are Havila Capella, Havila Castor, Havila Polaris and Havila Pollux. These ships will enter service with seven Hurtigruten ships in the daily coast service.

Australia’s Coral Expeditions’ two new ships will be Coral Adventurer (recently delivered) and Coral Geographer, which has just been ordered as a follow-on. Both are products of the Vard shipyard in Vietnam.