A travel industry giant closed today when Thomas Cook went into administration. While it never operated its own cruise ships, like recent days competitor Thomson Holidays, Thomas Cook nevertheless had a significant impact on the early days of cruising. From organising its first cruise to Norway’s North Cape in 1875, using the chartered Norwegian barque President Christie, to organising full World Cruises from 1925. In 1880, not long after its first North Cape cruise, Thomas Cook found itself promoting cruises from New York to Bermuda, the West Indies and Canada. Here we have a brief look at a corner of history. In the boom years of 1894 and 1895, New York featured highly in Thomas Cook’s priorities, with offices on Broadway, two on Fifth Avenue and another on Madison Avenue. Its new partner was the Quebec Steamship Company of 25 Broadway.

In 1880, one of Thomas Cook’s main suppliers in North America became the Quebec Steamship Company. With the arrival of the Intercolonial Railway at Halifax, the Quebec & Gulf Ports Steamship Co, now rebranded, introduced two new ships to the New York-Bermuda-West Indies run, both purpose-built for the trade.

Around this time, the company appointed Thomas Cook & Sons as its passenger agents, replacing Stevenson & Leve. The Orinoco appeared in 1881, and the Trinidad in 1885. Bermuda had recently received some excellent publicity from Samuel Clemens, better known as Mark Twain, which contributed to the company’s ability to build these ships. 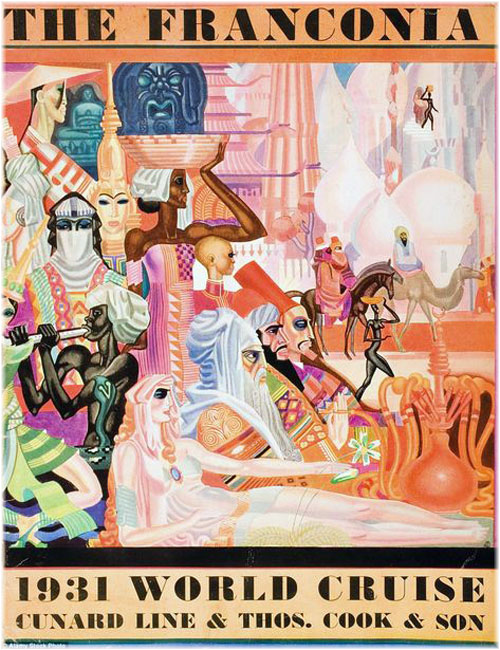 Mark Twain had been to Bermuda ten years before, in the course of writing “Innocents Abroad,” the story of a long cruise in the paddle steamer Quaker City to the Mediterranean.
But his 1877 return had been in the Bermuda, of the Quebec & Gulf Ports’ “New York & Bermuda Mail Line.”

After this voyage, Twain wrote four articles for “Atlantic Monthly.” Appearing between October 1877 and January 1878, just after his highly successful “Adventures of Tom Sawyer” had appeared, they were widely read and had an important influence on getting the first tourists to book passage to Bermuda.

Twain stayed only four days, but he would return with the Quebec Steamship Co six more times over the next thirty-odd years. He missed no detail, as Donald Hoffman related in “Mark Twain in Paradise: His Voyages to Bermuda,” published in 2006. “When the Bermuda returned to New York it carried a cargo of 13,464 boxes of onions, 3,010 barrels of potatoes, and 11,397 boxes and 97 crates of tomatoes.”

While Twain’s articles on Bermuda, combined with Thomas Cook’s experience in tourism, had provided a tremendous boost for the islands’ tourist business, and for the Quebec Steamship Co, which reprinted them, he himself was prone to seasickness. One quotation the company chose not to use was his famous “Bermuda is a paradise, but you have to go through Hell to get there.”

In a much more positive vain, he also wrote of Bermuda “you may go to Heaven if you want to. I’d druther stay here.” Thomas Cook did not sell passages to Hell.

By 1888-89, the Quebec Steamship Co’s “Bermuda & West Indies” schedule was advertising weekly winter sailings. A departure by one of the two ships from New York’s Pier 47 every Thursday, would arrive in Bermuda on Sunday. The line’s schedules beckoned tourists: “For a delightful winter excursion, the trip to Bermuda has not its equal. A short, refreshing ocean sail in one of these strong and elegantly equipped steamers will transpose you from the rigid and unpleasant winter weather to the balmy clime of the southern seas, to an island famed for its scenery and clad in the freshest verdure of spring.”

With the help of much publicity from Thomas Cook, Bermuda was quickly developing a sterling reputation as a warm weather resort for northerners, especially after the Princess Hotel opened in Hamilton on January 1, 1885. This Bermuda institution, the work of the Quebec Steamship Co’s Bermuda agent, today features a bronze statue of Mark Twain in its lobby.

In 1894 the Quebec Steamship Co began operating what it called “Special Cruises” from New York to the Windward Islands of the Caribbean, which it began to offer every January and February.

The 1895 “Winter Cruises” brochure described their success: “During the Winter season 1893-94, the Madiana made a series of cruises to the West Indies, and during the past summer, the Orinoco performed a similar service to the Maritime Provinces of Canada. These cruises were eminently successful in every possible way, and afforded unbounded satisfaction and pleasure to the participants.”

With fares between $130 and $275 per passenger, soon rising to a minimum of $150, these cruises were for the well off. They were successful enough, however, that in 1895 the company dedicated three ships, the Madiana, the Orinoco and the Caribbée, to make one cruise each, all departing in February.

The 1895 brochure elaborated: “The Quebec Steamship Company’s fine steamers Madiana, Orinoco and Caribbée, which have been selected to carry out these winter cruises, possess qualifications of the highest order for the service. Specially designed and built for high-class passenger traffic to the tropics, every consideration (excepting, of course, that of safety) has been subordinated to coolness and comfort. The staterooms are lofty and large, and are principally situated on the saloon deck, with a number of extra roomy ones on the shade deck. The promenade decks provide an unusually large amount of free and unimpeded space, a very important consideration, and are, as will be readily understood, thoroughly protected by awnings. The grand saloons are large and elegantly fitted apartments, lighted, as are all the staterooms, with the electric light; in every detail the steamers selected to make these cruises are thoroughly well adapted for a pleasure cruise in the tropics. … The commanders have had many years’ experience in these waters, are well known and popular, and seamen of great experience and ability.”

By 1896, five departures were offered, starting with the Madiana on January 10, and running through to March 17. Further on, discussing the service, the 1895 brochure added that: “The cuisine will be of the highest character, and the food provided the very best the markets afford. This department is in competent hands, the chief stewards are of French nationality. And have had many years’ experience in the company’s service. They will be assisted by a large and efficient staff, all speaking French as well as English.”

Summer Cruising To The Gulf of St Lawrence

The Orinoco’s 1894 cruise from New York to the St Lawrence had set out for Saint John, Halifax, Charlottetown, Gaspé, Tadoussac, the Saguenay River and Quebec. It drew many favourable comments, some of which were contained in letters written to Thomas Cook & Sons as the Quebec Steamship Co’s passenger agents.

Frank E Hodgins of Toronto, for example, wrote: “The cruise of the s.s. Orinoco has been such a success, that I hope the venture will be repeated next season. To any one familiar with the romance which the 16th and 17th centuries have thrown around the St Lawrence coast, our two weeks were almost too short. … It is hard to imagine upon this continent such a union of history and scenery”.

With Thomas Cook operating from offices in New York, Boston, Philadelphia, Chicago and San Francisco, it seems Mr Hodgins ended up being the only Canadian aboard this first St Lawrence cruise. This was something that would always be true, as Americans constituted the majority of those seeking to cruise the Gulf of St Lawrence, partly to escape the oppressive heat of summer in their own congested cities.

Mr W Vrooman of Parkersburg, West Virginia, wrote with his appreciation for the calls at Percé and Gaspé: “I take pleasure in stating that my trip from New York to Quebec per steamer Orinoco last month was very enjoyable. The courtesy of the officers of the steamer was marked and highly appreciated, as was also the politeness and attention shown by your representative. The scenery grand beyond description. The kindness of Captain Fraser in stopping the vessel and remaining in the vicinity of the Percé Rock until long after daylight, thus affording the tourists that magnificent view, together with the addition to the itinerary of the visit to the Gaspé, including the very delightful scenery of Gaspé Bay, deserves special attention.”

The 1894 cruise was so successful that the company decided to schedule the Orinoco for more summer cruises from New York to Quebec in July and August 1895. Meanwhile, the company continued to advertise the Miramichi, its mainstay in the St Lawrence, as its “St Lawrence Line to Maritime Provinces”.

Typically, for the season of 1893, for example, it had announced: “The Steel Steamship Miramichi, 1,000 tons having first-class accommodation for passengers, will sail from Montreal for Pictou, NS, calling at Quebec, Father Point, Gaspé, Mal-Bay, Percé, Summerside PEI, and Charlottetown PEI, at 4 pm Monday, 11th June, and every alternate Monday during the Season of Navigation, sailing from Quebec the following Tuesdays at 2 pm. At Pictou, the Intercolonial Railway train is taken for Halifax, whence connections can be made for St John’s Nfld, Saint John NB, Portland, Boston and New York.”

Such advertisements often now appeared in small print underneath the company’s main offerings for Bermuda and the West Indies, with the Miramichi now leaving Montreal at 4 pm, as opposed to the 4 am sailing times that had been advertised for the earlier Georgia. 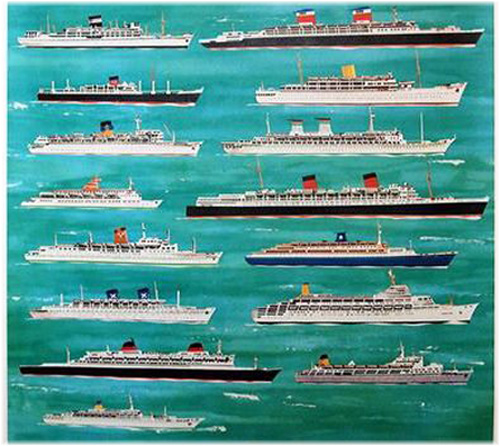 Quebec Steamship Co’s “Bermuda Line” also in 1894, the Quebec Steamship Co introduced dedicated service to Bermuda when a newly rebuilt Trinidad opened a separate New York-Bermuda shuttle without continuing to the West Indies. Her length overall had been increased from 270 feet to 320 feet, and she received a second funnel in the process.

The “New York Times” reported on her conversion, under the heading “Steamship Trinidad Now First Class,” on January 5, 1894: “The steamer Trinidad of the Quebec Steamship Company, which was sent to Sunderland, England, several months ago to be rebuilt, arrived here yesterday. She has been lengthened forty feet, a new triple-expansion engine has been put in her, and her cabins and saloons overhauled and renovated. Her general appearance has been entirely changed, so that she now looks like a miniature Campania. Two lofty funnels tower above her upper works, and she is now marked first class at Lloyd’s and the Board of Trade. She will be put into service in the Bermuda trade, and will alternate with the Orinoco.”

The Campania was one of the Cunard Line’s crack North Atlantic liners of the era. When the Quebec Steamship Co purchased the Pretoria from Britain’s Union Line in 1897, she was engaged primarily to the West Indies, and especially on the winter cruises from New York. While she did later sail to Bermuda, the Trinidad and Orinoco kept their places as the regular Bermuda ships. The purpose-built Bermudian followed in 1905 and became the first ship of the Furness Bermuda Line when Furness Withy & Co purchased the Quebec Steamship Co in 1919.

And so it went, with Thomas Cook relying on its widespread network around North America to book new cruise passengers to Bermuda, the West Indies and the St Lawrence. These same offices would be booking World Cruises from 1925 on. Founded in 1841, today Thomas Cook is no more.