Back in 1901, the then Hamburg America Line acquired the New York-based Atlas Line, one of the early cruising pioneers in the Caribbean. Now Mario Ferreira’s newly-formed North American cruise operation is adopting a similar name, as Atlas Ocean Voyages. Elsewhere, Ritz-Carlton Yacht Collection’s first ship has been delayed at her Croatian shipyard. And Scenic’s new expedition yacht Scenic Eclipse, has just been christened in New York by Emma Thompson.

Mario Ferreira’s Mystic Invest Holdings has announced that it is establishing Atlas Ocean Voyages in Fort Lauderdale. The new brand will target the North American source market with four 200-guest ships, with the previously announced Mystic Cruises to be renamed Atlas Ocean Voyages. 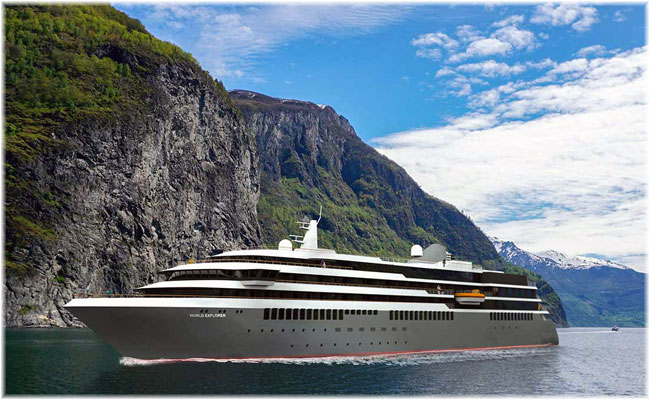 Said Ferreira, “we adjusted our brand name to better reflect the distinctive and luxurious global experiences that North American guests will enjoy. And to bring our unique adventure-cruising vision to life, we’ve assembled a highly skilled team of experienced industry professionals to lead our operations in Fort Lauderdale.”

Mystic’s recently-launched World Explorer is currently sailing for Nicko Cruises, also now owned by Ferreira, and will be chartered to Quark Expeditions for the Antarctica season. The World Explorer is the first of a series of at least six ships WestSea is building for the company in Portugal. 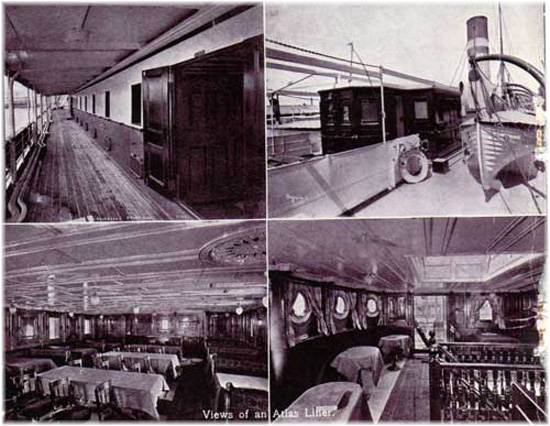 The Atlas Line sailed from New York to Jamaica, Haiti, Costa Rica and Honduras and continued in the banana boat business after the First World War

Alberto Aliberti has been named president of Atlas Ocean Voyages to lead the new company’s US expansion. Aliberti led strategic development and commercial operations at Mystic Invest and subsidiary river cruise operator DouroAzul for nearly fifteen years. He has also been a part of the shoreside management teams at Seabourn and Cunard. Prior, he served aboard cruise ships for various lines.
Aliberti started twenty-seven years ago as a receptionist aboard Sun Lines’ Stella Solaris and is a graduate of the US Naval Academy.

Atlas Ocean Voyages’ World Navigator is under construction at WestSea Viana shipyard in Portugal and is scheduled to launch in mid-2021. She will be followed by three more sister ships.
Mystic Invest launched the World Explorer earlier this year, and the World Voyager is set to follow in 2020.

The name Atlas happens to revive that of Atlas Line Services, one of the early cruise pioneers out of New York that was purchased by the Hamburg America Line in 1901. The Atlas Line sailed from New York to Jamaica, Haiti, Costa Rica and Honduras and continued in the banana boat business after the First World War.

“With additional challenges around the former shipyard management, both the new Board of Hijos de J. Barreras and the Board of The Ritz-Carlton Yacht Collection are working cooperatively towards a long term solution for the shipyard,” the cruise line said.

The line’s first 298-guest ship will now debut in June on a 7-night cruise from Barcelona to Palma de Mallorca, with port calls in the Balearic Islands.

Guests affected by this shift in timing will be invited to rebook their voyage on any one of of the company’s voyages in 2020, or newly announced 2021 itineraries. The company is extending voyage fare savings when guests rebook their future voyage or full reimbursement for our guests’ paid cruise fare and airfare and hotel change fees.

Ritz-Carlton’s inaugural sailing had originally been planned for February 5, despite reports in the Spanish press that the shipyard was facing a number of challenges.
The new ship is the first of three such 298-berth ships.

The 228-berth Scenic Eclipse, the first of two ships of the same design, is a head-turner. With her elegant lines and gleaming silver name plate, she is more luxurious mega yacht than expedition ship. Australian company Scenic, which has specialised in river cruising since 2008, has dubbed it “the world’s first discovery yacht”, with founder Glen Moroney saying he wants guests “to have the experience of a billionaire”. 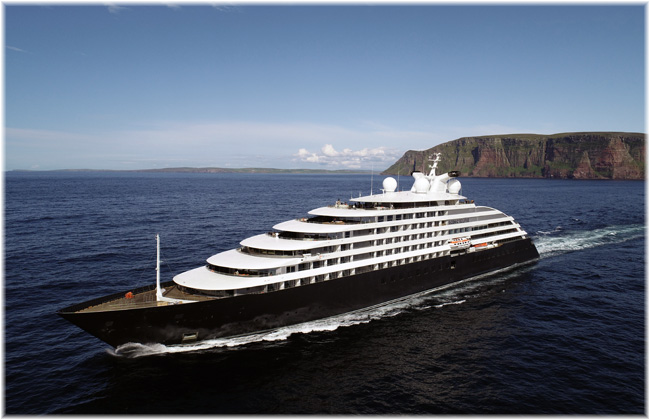 Upon boarding, passengers are ushered into a lounge that stretches the full beam, abundant with couches and armchairs, all in a charcoal, grey and silver palette. White orchids peer from planter boxes, and a grand piano shines in one corner. But the star of this space is the towering marble bar, where more than 100 whiskies, single malt and otherwise, glow like golden lanterns on the shelves.

Up the top, on Deck 10, is the Sun Terrace with twin Jacuzzi s and sun lounges, while on Deck 6 the Senses Spa has treatment salons, an infra-red sauna, steam room, thermal lounges and a rainbow-illuminated “experience shower”. On the opposite sides of Deck 7 are the Power gym and Pure yoga and Pilates studio.

The Eclipse has plenty of features that make it well suited to adventure. An aft marina, with nearby mud room, is designed for easy access to a fleet of twelve Zodiacs and multiple kayaks. Custom-built stabilisers boost the comfort level in heavy seas.

Capt James Griffiths, who has worked on all three Cunard Queens plus Lindblad and Windstar vessels, says Eclipse will be able to cross the dreaded Drake Passage on Antarctic itineraries in 36 hours, compared with the usual 48.

The ship has a Polar Class 6 rating, the highest that can be obtained by a passenger vessel, plus forward bow thrusters and an electronic Azipod propulsion system, designed to make it highly manoeuvrable, with a cruising speed of 17 knots. A dynamic positioning system means there’s no need to use the anchor in sensitive environments. Then there are the ultimate expedition “toys”: two shiny black Airbus HC-130 helicopters and the space-age submersible, Scenic Neptune.

Submersible pilot Remy Izendooren is at the controls of a vessel that can explore shipwrecks around Malta, take in the wonders of Caribbean reefs and dive the icy depths of the polar regions. He speaks enthusiastically of Antarctica

Dining is a highlight on Scenic Eclipse, with nine options, if you include room service and the Epicure cooking school. The main Elements restaurant is an Italian grill serving steak, seafood and pasta. Koko’s specialises in Asian fusion. At Koko’s private teppanyaki grill, eight diners can enjoy award-winning Wagyu beef and soy custard with sturgeon caviar.

Lumiere is quintessentially French, with escargots served in a petite brioche and a glossy, clear beef consomme. Plus there’s casual fare at Azure Cafe and the Yacht Club.

Scenic Eclipse sails the Caribbean before heading down the west coast of South America to spend November to March in Antarctica. She then makes for the Mediterranean and the Baltics, and sails the Arctic during the northern summer.